Home » Book Reviews » The Pearl Bryan Murder in Unwanted: A Murder Mystery of the Gilded Age

The grisly true story of the headless corpse of a young woman found in Fort Thomas, Cincinnati in 1896, sparking a quest to discover her identity and her killer 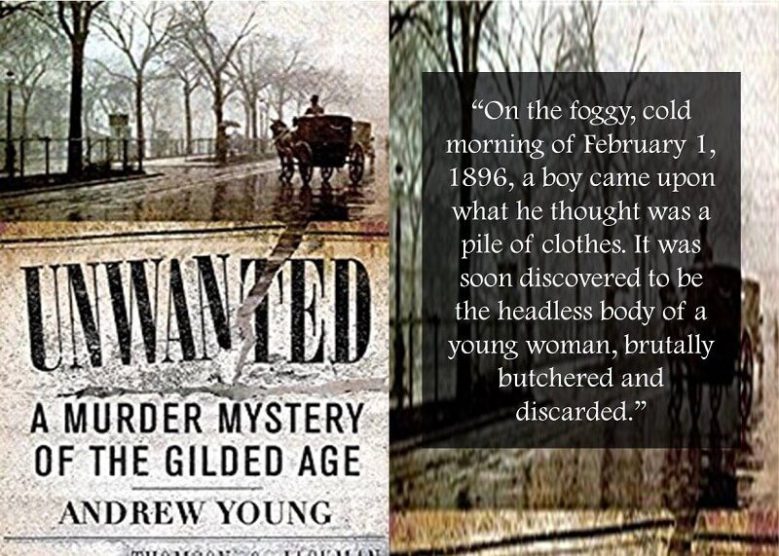 Share on FacebookShare on TwitterShare
“Centering his riveting new book, Unwanted: A Murder Mystery of the Gilded Age, around this shocking case and how it was solved, historian Andrew Young re-creates late nineteenth-century America, where Coca-Cola in bottles, newfangled movie houses, the Gibson Girl, and ragtime music played alongside prostitution, temperance, racism, homelessness, the rise of corporations, and the women’s rights movement.”

In late January 1896 in Fort Thomas, Cincinnati, the headless corpse of a young woman is found partially hidden under some bushes in a farmer’s field.  A gruesome crime which drew in the crowds.  With the horrors of HH Holmes in Chicago and Theo Durrant in San Francisco still rattling around in people’s minds, speculation was rife as to what had happened to this young woman and at whose hand. In the late 19th century, there was a fascination with murder and this case was no different.

People were curious and gathered around the scene trying to get a glimpse.  In fact, their fascination was so keen they took ‘souvenirs’ from the murder scene, anything with blood on it, although quite what for is anyone’s guess.

“Murders, on the other hand, were met with shock and dismay. Readers couldn’t quite seem to get enough of the gory details. The more gruesome the act, the more innocent the victim, the more people wanted to know.” – Andrew Young

In Unwanted: A Murder Mystery of the Gilded Age, writer and historian Andrew Young focuses on the gruesome and mysterious murder of Pearl Bryan in 1896. It follows the discovery of this young woman’s body and the long the search for her identity, providing detailed and gripping accounts of the hunt for clues and the arrest, conviction, and hanging of two men, Scott Jackson and Alonzo Walling, for her murder.

The story is placed within the era of the time and this writing gives a real sense of the way of life, the attitudes and issues of importance in Cincinnati at the time this murder and during its aftermath.

This curious case sounds like a carefully crafted work of fiction with a brutal murder, a mystery victim and the answers coming from a most unlikely source, but indeed this was a true life murder and a true crime case brought out of the archives and into our modern e-readers by historian Andrew Young.

It is a snapshot in history told through a terrible crime with a family not only left to deal with the horrors of murder but also the cruel torture of the head of their loved one never being found.  It was a case which made headline news and continued to fascinate the public as time went on. Andrew Young looks back at this event in history, digging up the news reports, the crime statements and police investigations into this murder and hunt for justice to piece together what exactly happened.

His research is extensive and his ability to provide details, insights, and history within this story provides an informative and interesting read.  Using the information we know now about that era allows Andrew Young to produce a comprehensive account of this crime from the moment the body was found, through the stages of police investigation right to the conviction and execution of these two men.

The procedures and norms of that time are highlighted through details of other criminal cases, which themselves provide fascinating reading.

“Ladies in fine dresses stood away from the sight where the body had been but glanced ever so delicately in that direction so that they might catch something horrific from the corner of their eyes.” – Andrew Young

With the science of fingerprints only just arriving within police use, a headless corpse made identification difficult.  A stream of people came to the local police to claim the identity of the headless woman who was all over the newspapers and the talk of the town.

Grief-stricken mothers convinced the victim was their missing daughter, angry siblings shouting their sister had been betrayed and then beheaded, friends of women in a loveless and violent marriage convinced the victim had been murdered by their husband.
It was a time where everyone scrambled to solve the case, as Andrew Young highlights “Theories were sprouting everywhere, rumors seemed inexhaustible. Every half hour the head was reported to be found.”

The breakthrough in the case surprisingly came from a local and well-respected shoe dealer. Following his curiosity, he visited the body in the morgue to examine the evidence for himself.  A practice that today is quite absurd but in 1896 no one questioned why a shoemaker should not be permitted to examine the body and her bloodstained, torn clothing.  It was this permission and this curiosity which provided the answers in this case.

“The general rule, however, was that abortions were nationally illegal and so this drove the practice underground making them expensive and exceptionally more dangerous.” – Andrew Young

L.D. Poock determined her shoes were of a rare make and through dogged determination this shoemaker slowly tracked down the make of these shoes, the company that made them, the shops that stocked them and eventually the record of their sale, thereby finally providing the name of their headless corpse, Pearl Bryan.

A discovery that ensured the case broke open and the truth began to emerge.  22-year-old Pearl Bryan had been four to five months pregnant, a country girl from Greencastle, Indiana who had traveled to the city for an illegal abortion. Scott Jackson it transpired was introduced to Pearl by her cousin Will Woods, whose testimony provided the last link the detectives needed to capture Scott Jackson and set the wheels of justice in motion.

28-year-old Scott Jackson, the believed father of Pearl’s unborn child was brought in along with 21-year-old Alonzo Walling, implicated as an accomplice by Jackson after his arrest. Jackson and Walling accused each other of the brutal murder, never individually admitting their guilt. The questions surrounding this case continued to circulate. As one writer asked, “Was it cruel fate which led pure, beautiful, innocent and attractive Pearl Bryan into the toils of such a fiend in human shape?”

Within Unwanted: A Murder Mystery of the Gilded Age, Andrew Young includes history, facts, and detail at almost every point of the story. While much of this history is useful, serving to highlight the times and give you as a reader a much better grasp on the era, it can at times seem a little irrelevant and distracting from the criminal case unfolding. Although in the latter half of the book this happens less and focus is more firmly fixed on the investigation of this crime and how breakthroughs were made and those responsible were found.

This is a very successful narrative of a murder mystery from the late 19th century and provides an excellent read for those curious about murders of the past and the criminal investigations, practices, and procedures that followed.

You can purchase a copy of Unwanted: A Murder Mystery of the Gilded Age by Andrew Young at Pen & Sword Books.

In the late 19th century, murder was a cause for fascination to the public. They wanted to see the crime scene, view the victim and in many cases take ‘souvenirs’. Unwanted: A Murder Mystery of the Gilded Age by writer and historian Andrew Young tells the story of a grisly murder which repeatedly made headline news. The headless corpse of a young woman was found in Fort Thomas, Cincinnati sparking a quest to discover her identity and her killer. A gripping insight into this era, Unwanted includes a great deal of historical detail highlighting America’s gilded age alongside other criminal cases of the time such as the Lizzie Borden family murders. A detective story full of mystery and dogged determination to solve a murder which had captured attention and intrigue. For those with an interest in historical true crime and 19th-century criminal procedures and investigations, this book will not disappoint.