Examining the story of Kieran Kelly, an ordinary looking man who turned into one of the most evil and prolific serial killers in Irish history

by Guest Author
in Book Reviews
Reading Time: 6 mins read
A A 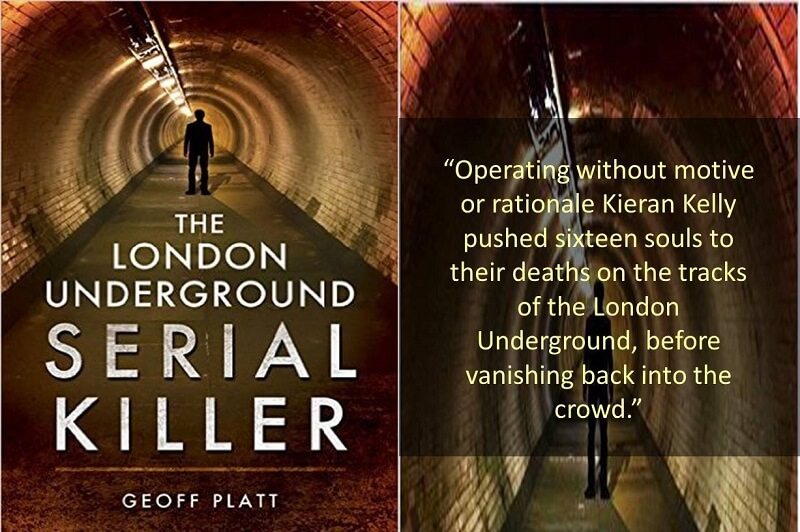 Share on FacebookShare on TwitterShare
“In a time of greater governmental control of the media, the case was hushed up, lest the residents of London be gripped by mass hysteria at the thought of a faceless killer lurking on the platforms of the Central line.”

“Please mind the gap between the platform and the train”. Every day millions of commuters and tourists rub shoulder to shoulder traveling the ‘tube’; the world’s 4th largest underground network. Being the deepest and darkest part of the 17 current lines that Transport for London operate is the Northern Line or better known to Londoners as the ‘Misery Line’ due to constantly running late in the 70’s and 80’s.

The London Underground Serial Killer is written by Geoff Platt, a former acting detective constable for the Metropolitan Police, and tells us of events that unfolded in the 1970 – 80’s.

He examines a man who was just ‘ordinary looking’ but turned into one of the most evil and prolific killers ever and became the only Irish serial killer in history. No one has ever heard of him due to government censorship claims Geoff Platt. Censorship of a murderer he claims, which covered up at least 18 murders due to fears the truth would cause public chaos. Let me introduce Kieran Patrick Kelly of Dublin, Republic of Ireland (known to his friends as Nosey).

Chapter one introduces the book by bringing our attention to who Kieran Kelly was and his Irish roots. In the 1950’s-1980’s, hundreds of thousands of Irish people came over to Britain, with the highest concentrate settling in London. As they had no work and were very poor, they thought that by moving to Britain they would have a better way of life.

Nosey and his best friend, who he served in the Irish Army with, were two of these. Unfortunately for London, he and his friend turned up at the time of the Coronation of Her Majesty Queen Elizabeth II. London was packed with millions of people from all over the world, all celebrating and partying and all totally inebriated. After sleeping rough for a couple of weeks, the duo bumped into someone they knew who managed to get them a place to rent in Tooting, south London. The easiest way to Tooting is via the Southern bound Northern Line where our first murder happens….

After drinking very heavily in a pub in central London, the two friends decided to go home and headed down to the nearest Northern Line tube station, Stockwell, with a couple of prostitutes.  Standing there waiting on the busy platform, Kelly was asked by his friend why he had not married as he was now 30 years old.  That simple question went round and round in his head and made him extremely angry.  His friend saw that this question had caused upset and tried to laugh it off and change the conversation saying that Kelly was not very keen on girls anyway.

Geoff Platt believes that Kieran Kelly was gay. Back then it was illegal to be homosexual in Ireland and in Britain. If he had been found out by his friend, as the author suggests, he would have been afraid that he would have been discovered and face ostracism from back home and be likely to suffer violent attacks like may gay men did during that time in public with no police protection when required.

Our serial murderer explained to the author:  “I heard the noise of the train and suddenly saw a blinding bright light in the tunnel ahead and we moved forward with the girls to the edge of the platform I just pushed him”.

Kelly nudged his ‘friend’ onto the tracks below just in time for the train to crush, cut and bleed him to death. Just a slight nudge with his shoulder, to look as though he was getting ready for other tube riders to disembark or about to bend down to do his shoelaces.

Chapter two shows something that I find very telling of society: although there were many witnesses on the platform, including these prostitutes, not one individual waited to assist the dead man or the police!  Kelly though, was certain one would grass on him, so he ran and ran.

In the following chapters of the book, the author highlights the background history of the underground system in London, the various open spaces, and parks that are hot spots for vagrants and major news events of the time. It’s not until Chapter seven that we re-join our murderer from Chapter two.  This is where Kelly’s major murdering spree of 35 years comes to an abrupt end, but only by pure chance.

By 1983 Kieran Kelly had been back to Dublin before coming back to London and returning to the Northern Line.  One day, Platt explains that Kelly and one of his vagrant friends were on Clapham common. Although neither of them had any money on them, they wanted some alcohol.  Sitting in the warm midday sun, a retired old man was sitting on the bench opposite them.  Their liquid breakfast came courtesy of the old man. Nosey got up, threatened the man and proceeded to steal his retirement gold watch and wedding ring.

Unfortunately for them two uniformed policemen were walking across Clapham Common and were spotted by the old man who proceeded to tell them his version of events.  The policemen searched Nosey but could find nothing on him.  After radioing back in and hearing of Kelly’s long violent past, the officers handcuffed and arrested both Kelly and his friend and frog-marched them off to Clapham Police Station.

Kelly knew his friend was fully aware that should he grass on him, Kelly would kill him.  So the desk sergeant ordered Nosey be strip searched, considering that he had not washed for years, it was an extremely unpleasant job for the arresting officers.  After a long and thorough search, the police constable found the watch hidden deep inside the crease of Kelly’s bottom but could not find the ring.  Whilst the officers were washing and changing uniform, the desk sergeant had Kelly and his friend put into a holding cell until he was able to process them.

It is now that the last known murder happens.  One other vagrant, William Boyd, was laying fast asleep in this holding cell with Kelly and his friend, sleeping off a rather heavy amount of alcohol.  Unfortunately for him, he was snoring and could not hear Kelly getting angrier at him until Kelly took off his socks and strangled the man to death.  Upon seeing what was unfolding, his friend tried to get the attention of the desk sergeant. By the time the officer saw what was happening the man was dead.  All hell broke loose.  The emergency bell was pressed and Kelly was shoved into another cell whilst paramedics arrived.  No matter how hard the Sargent tried to resuscitate William Boyd, the paramedics pronounced him dead.

It is at this point that the author’s version of events starts to explain the missing parts, much like piecing a jigsaw together.  So what happened to the Northern Line Serial Killer? Kieran Kelly was found guilty of the murder of his cellmate and one further count of manslaughter.  In total, Kelly committed 17 murders and confessed to many more. Recently, the commissioner of the Metropolitan Police, Sir Bernard Hogan-Howe, announced the criminal file on Kieran Patrick Kelly would be reopened and investigated.

The London Underground Serial Killer does jump around in places and you need to stay focused and see it to the end.  This publication would suit someone new to reading true crime or anyone who is squeamish as it does not go into forensic details. It would also appeal to a person who is interested in researching or reading about the history of the London Underground.  One question the book does leave open, however, is: Where is Kelly now?

You can purchase a copy of The London Underground Serial Killer by Geoff Platt at Pen & Sword Books.

Meet the Reviewer: My name is Benjamin Thompson and I’m a BSc (Hons) student in Forensic Psychology at The Open University. I have always wanted to go into Forensic work and wish to continue my studies so that I can practice as a Chartered Forensic Psychologist. I am also proud to be a registered member of the British Psychological Society.