Journalist Nick Foster tells the story of William Holbert, an American who settled in Bocos del Toro on Panama, and quickly decided his path to wealth was through murder 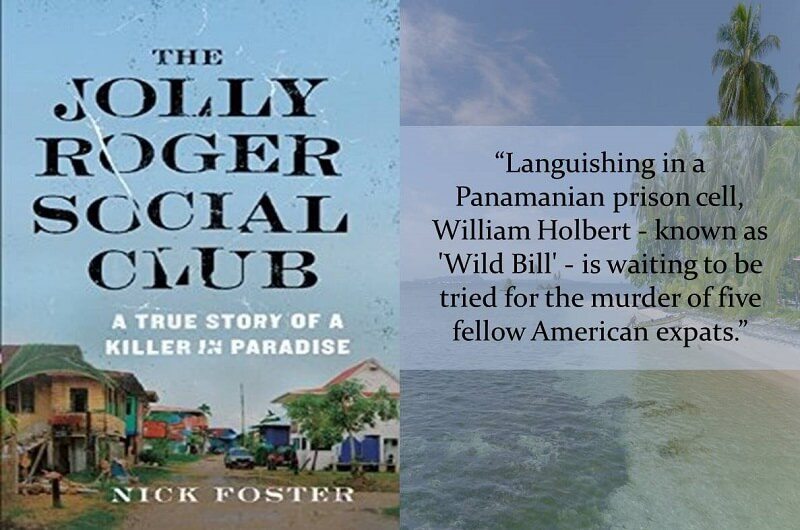 Share on FacebookShare on TwitterShare
“The Jolly Roger Social Club is not just a book about what Holbert did and the complex financial and real estate motives behind the killings; it is about why Bocas del Toro turned out to be his perfect hunting ground, and why the community tolerated-even accepted-him for a time.”

When caught in 2010, William Holbert confessed to the murders of five people in Panama and one in Costa Rica. His motive? Financial gain through taking over his victims’ properties after he had so callously taken their lives.  William Holbert behaved as their friend, invited them to his bar, drank and reminisced with them, and when the time was right, he shot them dead and buried their bodies allowing him free movement to take their homes.  He then continued with his friendly easy-going exterior, saying nothing to the unsuspecting patrons around him while he scanned for his next victim.

The Jolly Roger Social Club is written by Financial Times and the International New York Times journalist Nick Foster and tells the story of a number of murders in Bocas del Toro, Panama carried out by William Dathan Holbert, otherwise known as ‘Wild Bill’ between 2000 and 2010.

A book born from a newspaper assignment to examine the real estate boom in Panama, once the author unearthed this tale it was one he felt compelled to tell. Panama is a predominantly Spanish-speaking island in Central America that many go to escape something or someone. Especially attractive for American ex-pats, Panama is bordered by Costa Rica, and it is a place where few questions are asked and new names and invented pasts are easy to execute.

William Holbert is an example of how someone particularly skilled at hiding his true identity can easily blend into this environment and with skills of manipulation and deceit can draw people in and carry out some evil deeds. William Holbert’s period of serial murder was no doubt smoother due to the assistance from his lover, Laura Michelle Reese. By targeting a community already running away from the truth, his victim pool was more available to him and probably more likely to take him at face value. Nick Foster expertly conveys the scale of deceit that can surround Bocas del Toro with false paperwork being easy to obtain.

American ex-pats arrived and left with little warning or little preparation, so the sudden disappearance of Hobert’s victims did not raise suspicions. With a failed marriage and bankruptcy behind him, William Hobert and his new partner lived under the names of William Adolfo Cortez and Jane Cortez. A bodybuilder, Holbert was a massive hulk of a man and it is unlikely anyone within his radar for murder would have stood a chance against him.

Michael Brown was shot in the head, followed by his teenage son and his wife. They were buried in shallow graves not far from the property, where they remained until discovered over two years later.  Searching through the house and the paperwork stored within gave Holbert all the details he needed to access and control the Brown’s bank accounts and assets.  Money he would live comfortably from for years after the murders. His first victim was former drug trafficker Michael Brown who was selling his property. Realizing that not only was his home in an ideal rural location, but this was also a man who was sitting on a substantial amount of cash, William Holbert decided to dispose of its owner.

Holbert chose an old wooden boathouse on the property he had stolen to set up a bar. His own social club and one which became known locally as the Jolly Roger Social Club, a regular gathering for drink and drug-fuelled parties. Using adverts placed in the local newspaper to advertise he was looking for property, along with getting to know the locals through his bar, Holbert found more victims.

While the author does indeed follow the tale of this killer and the motivations behind his crimes, the focus is very much on Bocas del Toro and its history as to why it became such an easy target for a man to kill ex-pats and seemingly get away with it.  As a result, there is a great deal of information about the area, its past and its economic, financial and political standing, which while interesting does somewhat take away from the story of these murders.

It could be said this book has tried to be two things in this regard and at times they do not always gel together. What is clear is the huge volume of research that has gone into this writing with Nick Foster fully exploring the history of Panama.  This means a wealth of information has been packed into one book and in places, it weakens the story and does not always give each part the stage it deserves.

“Every paradise has it’s snake, of course, and often more than one.”

Arrested in 2010 trying to cross the border into Costa Rica, William Holbert’s trail of murder and theft was brought to an end. After the last killing, Holbert and Reese were pinpointed as prime suspects by police who had by now realized this latest victim wasn’t the only ex-pat to have gone missing in recent years.

The Jolly Roger Social Club is a detailed insight into the murderous actions of this couple and particularly of William Holbert.  Their backgrounds are explored alongside how they carried out the murders on Panama and how they got away with them for so long.

Equally, this is a book about Panama itself and provides plenty of research and history. It is loaded with facts, figures and well-researched detail regarding the political and economic status of the area and its progression over recent years.  A solid backdrop for how a man such as William Holbert could operate freely, it does provide a much wider and deeper viewpoint than many other true crime books which have focused on a particular case.

For true crime fans, this is an enjoyable book about a serial killer who is not so well-known but it is a book which will also appeal to historians and those with an interest in understanding Panama in its own right alongside how its climate was able to facilitate a serial killer.

You can purchase a copy of The Jolly Roger Social Club by Nick Foster at Amazon.

The island of Panama in Central America is an idyllic area of the world however, there can be a dark undercurrent. It is a country many go to in order to hide from their pasts, one where new identities and back stories are easy to come by. The Jolly Roger Social Club by journalist Nick Foster tells the story of William Holbert, one such American who settled in Bocos del Toro on Panama, and quickly decided his path to wealth was through murder. Holbert murdered fellow American ex-pats in order to take control of their properties and assets, setting up his own social club in a rundown shack on the land of his first victim. The Jolly Roger Social Club was born. While this book is the tale of William Holbert, exploring his background, his motives and the murders he carried out, it is also an extensive investigation into the history of Panama and the political and economic climate on this island. It is an interesting and educational read packing a great deal into one book. However, at times this crisscross between a true crime book and a historical analysis can be confusing. This is a book which will appeal to true crime fans with a focus on a lesser-known serial murder case and one which also addresses the issue of how the uniqueness of this country enabled a serial killer to get away with his crimes for so long.