Although the death penalty in Britain has now been abolished, in the early 20th century when convicted of murder you were sent straight to the gallows to hang. 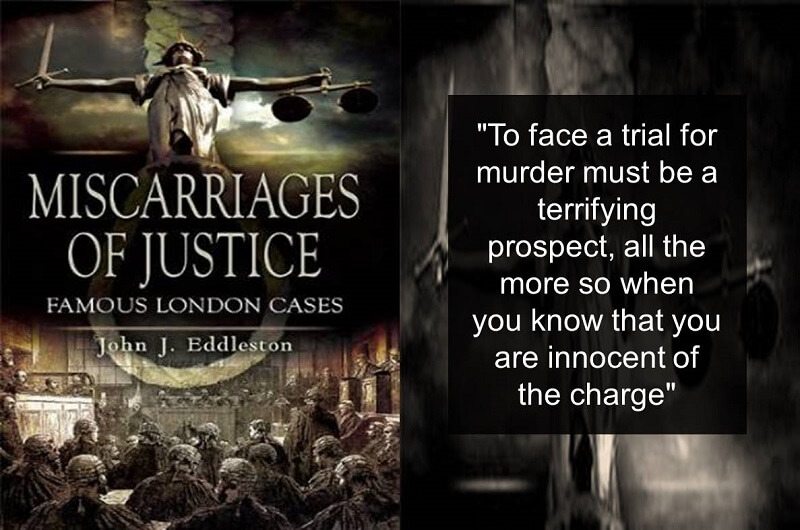 Share on FacebookShare on TwitterShare
“All of the cases reviewed in this book involved one or more individuals who were put on trial for taking the life of a fellow human being. The stories involve the eventual execution by hanging of nine men and one woman.”

The death penalty was abolished in the UK in 1965, largely due to pressure regarding miscarriages of justice. While this has ensured the innocent can no longer lose their lives, wrongful convictions still happen with men and women spending years of their lives locked in a prison cell, labeled a criminal for crimes they did not commit. Looking back in history, it is clear that miscarriages of justice are a significant part of our Criminal Justice System. The difference is that in the early 20th century when you were convicted in a court of law, you were sent to the gallows to hang.

In 20th century Britain, 865 people have been executed; their lives were taken as punishment for crimes they have committed. Four of these individuals, however, have since been officially pardoned.

Years after their deaths the Criminal Justice System has realized its mistake; George Kelly, Timothy John Evans, Derek William Bentley and Mahmood Hussein Mattan should not have been put to death. They did not commit the heinous crimes they were convicted of and they did not deserve to be executed. Now, of course, it is too late. These men are dead and this act cannot be reversed.

In Miscarriages of Justice: Famous London Cases, author John J Eddleston tells of nine cases from the London area between 1900 and 1972. Telling the story of twelve people who were tried for murder, chapters progress through the decades case by case. A logical layout which adds to this text, highlighting how the Criminal Justice System has developed over the years as each case is played out.

The author’s aim in this insightful and educational book appears to be to give the reader the full facts of each historical case. The murder, the arrest, the interviews and the trial. The motive and opportunity put forward by the prosecution against the argument of innocence, the alibis and the mitigating circumstances put forth by the defense. To let us the readers make up our own minds on the innocence or guilt of each one of these individuals.

“It may be that the reader believes that it is acceptable that four innocent men were hanged out of a total of 865, but when one has researched every single one of these cases, as I have, then the number who may well have been innocent appears to rise.”

In doing so John J Eddleston not only provides an engaging account of each case, which alone provides an enlightening read but provides discussion and opportunity for readers to consider the outcomes and their opinion on them. In these cases, it is impossible not to question some of the evidence, the theories, and the convictions. Hindsight is a wonderful thing and as each decade has passed our Criminal Justice System had modernized with new regulations, laws and policies which were not in place or in action at the time of many of these cases.

A pleasing element of this book is the many images included in each chapter. All black and white, they show the scenes of crimes, the victims as they lived before their demise and the alleged perpetrators. With the backgrounds, features, and clothing on display, they all give a stark reminder of the era most of these crimes and trials took place in.

“I want to give myself up, I have disposed of my wife” –Timothy John Evans, 1949

The curious case of Timothy John Evans and the death of his wife and baby daughter in 1949 was particularly troubling. Timothy Evans walked into a police station and claimed his wife had wanted to abort their second child.

After trying various home remedies which had failed to work, she had died after ingesting a solution given to him by a nameless man in a café who he had expressed his woes too. He claimed he panicked and stuffed his wife’s body down a drain outside their property.

Upon police investigation, his story did not check out and Timothy Evans promptly changed his statement on questioning. His second statement laid the blame for his wife’s death on his neighbor, John Christie. He claimed Christie had medical training and had offered to perform an abortion for his wife. Despite his misgivings, he had gone along with the plan and his wife had died during the procedure. Police, still searching for his wife’s body, finally found evidence of murder at 10 Rillington Place in Nottinghill where both Timothy Evans and John Christie lived. The bodies of Beryl Evans and little Geraldine Evans were found in the washhouse of the property.

When presented with this discovery, Timothy Evans changed his story again. He now claimed his wife was incurring large amounts of debt and he had killed her and his daughter as a result. When the case eventually went to trial, he was found guilty of the murder of his daughter and was hanged at Pentonville prison on 9th March 1950.

This unsettling tale becomes more complicated after the discovery of three female bodies at 10 Rillington Place three years later in 1953. One of which was the body of John Christie’s wife. John Christie was arrested for murder, promptly found guilty and he too was hanged at the same place as Timothy Evans, Pentonville Prison, on 13th July 1953.

“A medical examination after his arrest showed that Evans had an IQ of just 65 and he was diagnosed as an inadequate psychopath with schizoid traits.”

Certainly, in today’s world with medical evidence taken into account, Timothy Evans may well have been found innocent of the murder charges he faced.

John J Eddleston is a prolific writer on criminal history in Britain. An author who has researched criminal cases across the country providing an alluring array of titles covering our cities and towns within Pen & Sword Books Foul Deeds collection. These include ‘Foul Deeds and Suspicious Deaths in Southampton’ and ‘Foul Deeds in Kensington and Chelsea’. Famous cases and further work on the executions which have taken place within the UK also feature with The ‘Encyclopedia of Executions’ and ‘Jack the Ripper: An Encyclopaedia’ being two of many which stand out.

In Miscarriages of Justice, there is a sadness as you read through each well-formed chapter and understand the details of each case.  Chapters provide excellent summaries without getting bogged down in too much detail.

Author John J Eddleston has clearly carefully selected cases to include from the many available and he has chosen well. There is an aspect of crime which repeats itself over time, none more noticeable in this regard than the act of murder. Even in 1905, we can see some of the same crimes and stories that we hear today. In Chapter 2, John J Eddleston tells the tale of Arthur Devereux, a man who mysteriously moved house with his son without any trace of his wife and young twin boys. Their bodies were found some two months later stuffed in a trunk which had been padlocked and left in a storage unit.

When questioned Devereux claimed he was innocent of murder, that he had come home one day and found them dead. His wife Beatrice, he claimed, had murdered his twin sons and then taken her own life. Just as Timothy Evans would do 40 years in the future, he claimed he panicked, didn’t know what to do and chose to conceal the bodies and disappear from the area rather than call the authorities.

The jury, however, did not believe his pleas of innocence. He was found guilty after just ten minutes of deliberation and Arthur Devereux was hanged at Pentonville prison on 15th August 1905.

Was there reasonable doubt in this case? It is quite possible that Arthur Devereux was telling the truth and it was a tragic murder-suicide which took his family from him rather than murder at his own hand.

I would have liked to see a summary conclusion chapter at the end of Miscarriages of Justice. For such a thought-provoking book some final conclusions after these presented cases would have ended the book very nicely. Nevertheless, this was a very enjoyable read including a number of cases I was not aware of before. Furthermore, the invitation to consider each case and come to my own conclusion was a welcome one and a different approach than other books on a similar subject matter.

A very well organized, researched and well-presented book on miscarriages of justice within the UK in the 20th century. The skill of John J Eddleston in presenting his research in easy to read chapters which maintain your interest is evident throughout. This is a book which will satisfy anyone with an interest in criminal history and the Criminal Justice System. A book which ensures these significant cases from history are not forgotten and pushed aside and one which encourages examination of whether these systems of our time made the right decision and what could have, and maybe should have, been done differently.

You can purchase a copy of Miscarriages of Justice: Famous London Cases at Pen & Sword Books.

We place faith in our criminal justice system to convict and punish those who are guilty of crimes, however, the system does not always get it right. Miscarriages of Justice: Famous London Cases tells of nine murder cases which took place in London between 1900 and 1972 where the outcome of execution was highly questionable. Although the death penalty in Britain has now been abolished, in the early 20th century when convicted of murder you were sent straight to the gallows to hang. With cases such as Louise Masset, convicted of murdering her son in 1900 and being the first person to be hanged in the 20th century to Timothy John Evans hanged in 1950 for a murder most likely carried out by his neighbour John Christie, criminal history author John J Eddleston expertly tells their stories and invites you to make up your own mind on their guilt or innocence. A well-crafted book, presenting fascinating case studies from Britain’s history which will appeal to historians and true crime fans alike.