In a harrowing historical true crime case, the police of 1900's Ohio did not recognize they had a serial killer in their midst. 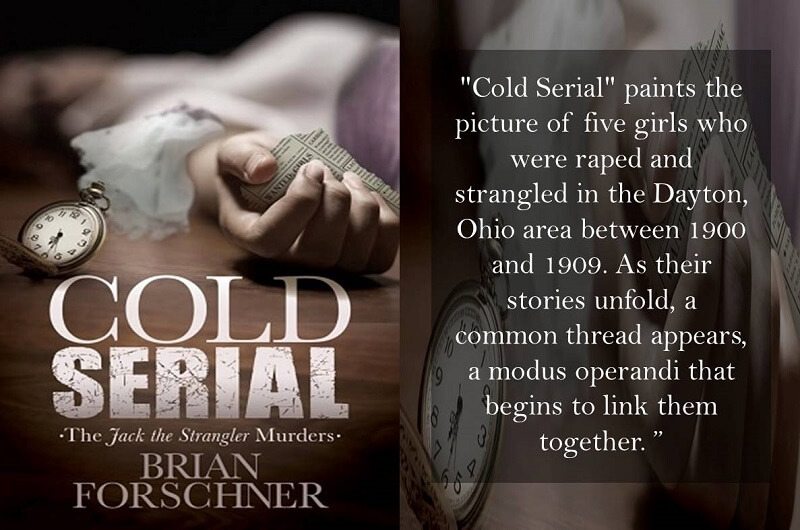 Share on FacebookShare on TwitterShare
“The working conditions, lack of rights for women and police protection, and the sexism of the age portray these girls as victims not only of a crime but also of their time. During that era, police did not recognize the lurking shadow of a predator. But through diligent research conducted by the author, it is now revealed.”
BUY FROM AMAZON

Between 1900 and 1909 five young women were brutally murdered in and around Dayton, Ohio. In a harrowing historical true crime case, all women had been beaten, strangled and raped. These were shocking crimes in a community which had rarely seen such malice. By 1909 the method of killing, the taking of clothing from the victims and the bold behavior of the man responsible, suggested to curious investigative minds that these women had been ‘struck down by the same hand’. Compared in the press to the Jack the Ripper murders in Whitechapel, London in 1888; this killer was nicknamed “Jack The Strangler”.

In his first true crime book, author Brian Forschner has delved head first into this historical true crime case. Using press articles of the time and the official documentation available, he has been able to reconstruct the events of over 100 years ago in a most unique and engaging manner.

In ‘Cold Serial: The Jack The Strangler Murders’, Brian Forschner has clearly spent time and attention in his research, no doubt fuelled by his own personal connection to one of the victims. Mary Forschner, at just 15 years old was the fourth victim in this series of murders and she was Brian Forschner’s great aunt. A relative he knew nothing about until research uncovered a terrible family tragedy, sparking an ongoing three-year quest for the truth.

On 13 Oct 1900, 11-year-old Ada Lantz went missing from a family party. She was found by family members in the outhouse slurry pit where they assumed she had fallen in and drowned. Taken back into the house they note her missing clothing, the blood, bruising and scratches on the young girl as they call the coroner.

In an illustration of the era, the family cleaned the body from the grime of the pit and burned her torn and damaged clothing. They waited anxiously as the coroner carried out a preliminary autopsy as Ada Lantz lay on the dining room table. It is quickly established this was not a tragic accident but the murder and rape of an 11-year-old child. A bold act with a family party underway merely steps away.

The murder of Ada Lantz was the first attack on a young girl in what became a series of tragic murders seeing a total of five women lose their lives in the same horrific way. Chapter by chapter Brian Forschner takes you through each devastating murder in a fast-paced engaging exchange you find difficult to put down.

“This deed was one of the foulest in the local annals of crime, and the barbarity evidenced knew no bounds. The fiend, intent upon his brutish deed, considered the life of an innocent child no more valuable than that of a dumb animal.” – Coroner in Ada Lantz murder

With each account, we follow a timeline of events as each historical true crime unfolds.  Using newspaper accounts and trial summaries printed in the local and national press, Brian Forschner has reconstructed the lives and deaths of these five women.

He has added narrative on what may have been said or acted out at the time providing a reading experience similar to a faced paced crime fiction novel.  However, while you are reading you are acutely aware that this narrative is based on true events that took place in 1900s Ohio.

While some may not appreciate this approach to a historical true crime, what it enables is the sights and sounds, interactions and environments of these women’s lives to be brought to life, through a narrative transporting you straight into their worlds. A narrative which illuminates the way of life in the 1900’s with bus trolleys for transport and lanterns for night lights alongside the attitudes of Dayton residents, the customs of that era and the police procedures of that time.

“The working conditions, lack of rights for women and police protection, and the sexism of the age portray these girls as victims not only of a crime but also of their time.”

Through Brian Forschner’s approach and his fluid writing style, you gain a feel for who each woman was; the shyness of Anna Markowitz, the youthful fun of Ada Lantz. Vivid descriptions create the scenes in imagery for you as you read page by page.

You almost feel like you are there, watching the events unfold. In the dining room where the coroner is carrying out a preliminary autopsy of a murdered child. Into the park where a sister desperately tries to do something to help as she finds her younger siblings’ body battered and bruised. Brian Forschner has achieved maximum impact with true life events focusing on the victims who are so rarely are given the voice they deserve.

In many true crime books, especially those in the historical true crime genre, the case in hand is either a well-known killer already caught and punished or at least, the killer is announced on the front cover. In Cold Serial these murders were unsolved and with each chapter and each murder, a mystery attacker begins to emerge.

In the intricate detail included in each case, a picture is being built of the individual who carried out these horrific crimes. In today’s time, this picture would most certainly be referred to as a criminal profile and it is the profile of a serial killer. The behaviors, the signature and the characteristics displayed in how he murdered each of his victims are pieces of a puzzle forming a behavioral outline of the man responsible.

“This monster is selective. His victims have been nearly of an age. Their circumstances in life have been similar. All were girls attractive in face and form. The best evidence that all the murders were committed by a single individual is the fact that in each case the victim was strangled.” – Dr Charles H Clark, Superintendent of Cleveland State Hospital

In the final chapter, Brian Forschner provides an unforeseen twist in solving this historical true crime case. As revealing as it is fascinating, Chapter Six is an unexpected bonus in an already satisfying book. This last chapter allows for reflection as it gives you a sense of attainment and finalization as the complex strands of these cases are carefully brought together.

Brian Forschner has brought energy to five young women whose lives were tragically cut short and whose stories had faded into history. After reading this book, their names and the impressions of who they were I know will stay with me and the tragedy of their murders is felt even deeper.

Justice was not done for Ada Lantz, Dona Gilman, Anna Markowitz, Mary Forschner and Elizabeth Fulhart in 1900’s Ohio. Their murders were not solved and the individual responsible was not exposed for his ruthless actions. Through Cold Serial and the dedicated research by Brian Forschner, these are cases that have come out of the shadows, revealing the identity of a serial killer and giving those victims justice, allowing them to finally rest in peace.

You can purchase a copy of Cold Serial: The Jack the Strangler Murders by Brian Forschner at Amazon.

Across a span of ten years, five young women were viciously murdered in and around Dayton, Ohio. In an age of sexism and few rights for women, the police of the 1900’s did not recognize they had a serial killer in their midst. Author Brian Forschner gives these women a voice, reconstructing the stories of their lives and of their deaths. A book made particularly remarkable by the unexpected ending in a final chapter which brings the strands of these shocking murders together.