Angel Meadow was a slum run by angry and violent men who operated together, keeping the fear alive by ensuring regular fights and commonplace confrontations took place day or night. 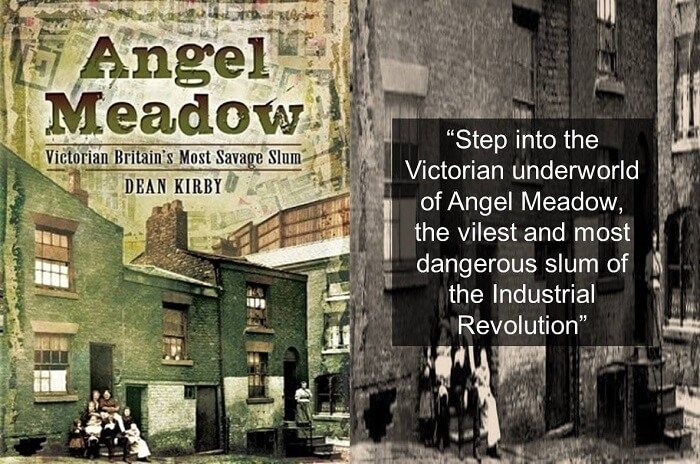 Share on FacebookShare on TwitterShare
“In the shadow of the world’s first cotton mill, 30,000 souls trapped by poverty are fighting for survival as the British Empire is built upon their backs. Thieves and prostitutes keep company with rats in overcrowded lodging houses and deep cellars on the banks of a black river, the Irk.”

While Manchester as an industrial city flourished in the Industrial Revolution through its production and export of cloth, the workers who enabled such success and wealth through their long days and repetitive work did not see the rewards. These workers were left to struggle and try to survive in appalling poverty while the factory owners revealed in their wealth. It was a divide which characterized Victorian Britain and Angel Meadow, one of the cities many slums for the workers and their families, became a well-known danger and one where “the poor people live and die”.

“Only the brave, the stupid and the helpless entered Angel Meadow.”

In Angel Meadow: Victorian Britain’s Most Savage Slum, author Dean Kirby provides the history of not only the slum that was Angel Meadow but the Victorian era and the city of Manchester.  The history and the shocking events that took place at Angel Meadow have been researched and painstakingly documented.

Dean Kirby has found key characters and significant events which populates the appalling history of this desolate slum. He reports these events with the facts, injecting the truth and the reality of the era and very much expressing the desperation of the ill-fated residents who found themselves trapped in this slum and in unimaginable poverty.

The nocturnal burials of stillborn babies because the mother could not afford the sixpence for a proper burial.  The attacks on figures seen as authority; police and local watchmen. The arrival of cholera at the slum in 1832 which ripped through its ramshackle buildings spreading from resident to resident in quick-fire succession.

Dean Kirby has found, investigated and collated the stories of individuals who lived in Angel Meadow. His book is full of tales of fights, struggles to survive, courageous stands for better conditions and the bitter deaths of those who lived in these horrendous conditions.

“Manchester’s middle classes saw themselves as separate from the workers who faced a daily fight for survival as the cotton empire was built on their backs.”

This decision to do so personalizes this book and highlights in devastating clarity the reality that these people faced.  He tells their stories to ensure what they went through and the events that took place at Angel Meadow are not forgotten or are they glossed over within history.

The creation of this book is personal for author Dean Kirby whose great-great-grandfather, William Kirby lived in Angel Meadow working as a fishmonger in 1877. Remarkably in 2012, archaeologists digging at the site found William Kirby’s house and fish-shop allowing Dean Kirby to actually stand in the living room of his Victorian forefather.  There is no more powerful motivation to tell the story of your ancestors and as Dean Kirby highlights “Angel Meadow is a story that had to be told”.

The introduction to this book jumps right in, transporting you straight back to 1893 and the dark streets that was the slum of Angel Meadow. Describing in vivid detail the events leading to the death of a Thomas Matthews, burnt to death after a lamp was thrown covering him in lethal paraffin, you are left in no doubt as to the living conditions, the tense emotions, anger and behavior of those who lived on top of each other.  Furthermore, the danger of such a place leaves a chilling mark as you progress into chapter one.

This was a slum made up of lodgings scattered around the small area, room upon room on top of each other filled to the brim with families trying to survive. Factories and shops were the only interruptions to the cramped living conditions.  A slum run by large angry and violent men who operated together, keeping the fear alive by ensuring regular fights and commonplace confrontations took place day or night.

Men who had no fear, no time for consequences and no compassion for others.  They attacked the residents of the slum and extended their aggression and violence to the police who tried to patrol the area but who had little to no control over the collections of individuals who lived there.

“Angel Meadow was the worst slum of all. A wild and brutal borderland at the norther edge of the city, it was home to more than 30,000 souls, many of them Irish immigrants, who were sucked into a rabbit warren of streets covering less than a square mile.”

The Victorian press were well aware of the conditions and horror that could be found in Angel Meadow with the odd brave journalist venturing inside to see for themselves.  Their published descriptions of this slum make grim reading; “the lowest, most filthy, most unhealthy and most wicked locality in Manchester” said journalist Angus Reach for the Morning Chronicle. Furthermore, this was a slum which was “hell upon earth” according to German philosopher, Friedrich Engels.

In this book, the author expertly achieves driving home the grim horror that was Angel Meadow. These were conditions at the bottom of human endurance and conditions that go beyond imaginations of modern-day citizens.

Dean Kirby manages to provide visual imagery that is vivid and it is chilling.  The sense of sadness which waves through you as you read this book knowing that this is not fiction is heavily felt. As is sympathy for the Victorian people, families, and children who lived and died in these conditions within one of the most prosperous cities in England. If you are interested in British history, it’s criminal past and the Victorian era this will be a satisfying and educational read.

You can purchase a copy of Angel Meadow: Victorian Britain’s Most Savage Slum by Dean Kirby at Pen & Sword Books.

Angel Meadow was a Victorian slum in the heart of Manchester, one of the Industrial Revolutions most prosperous cities in England. While the city’s bosses flaunted their wealth, the factory workers lived in filth, arguing and confronting each other under horrendous conditions of poverty. In Angel Meadow, author Dean Kirby has gathered together the history, personal tales, and reality that was the vilest and most dangerous slum of the Industrial Revolution. An excellent book which leaves you in no doubt of the conditions endured and the danger which hung over this slum day and night. With a personal connection to the slum after discovering his great-great-grandfather lived there in 1877, Dean Kirby is eager to tell its story. This is well written, engaging and as fascinating as it is chilling. For anyone interested in historical true crime and the Victorian era, this is a book which will leave its mark.