The popular image of Victorian Britain is an ordered, well-behaved and well-mannered society; it is not of an era littered with riots, violent muggings, and terrorist attacks. 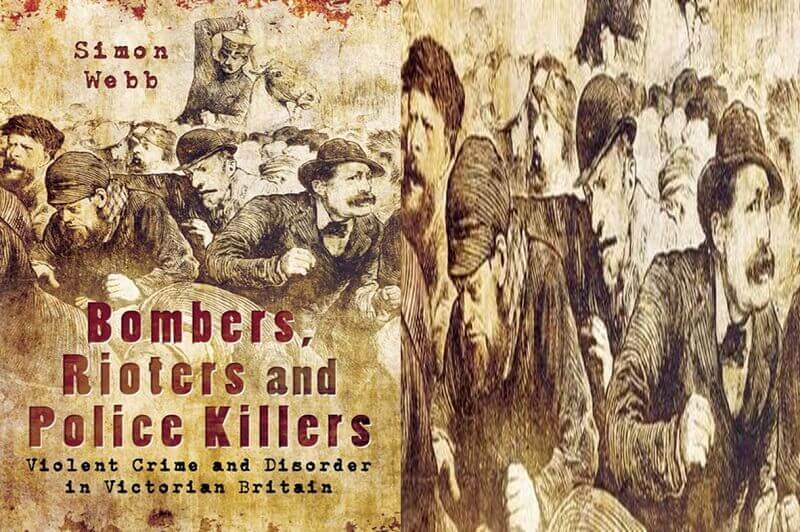 Share on FacebookShare on TwitterShare
“Simon Webb reveals the disorder and violent crime endemic in Victorian Britain; a time when the citizens faced problems eerily similar to those with which we have to contend today.”

The Victorian era in Britain ran from 1837 to the death of Queen Victoria in 1901.  It is a period in British history known for tradition, manners, high moral values and generally a very ordered society.  However, Victorian Britain was also a period of great change with the boom of the industrial revolution bringing people into the cities from the country and the development of a new middle class, further increasing the significant gap between the rich and poor.

When it comes to crime, there is no question that the Victorians experienced their fair share of criminality.  In fact, the Victorian period had one of the harshest punishment regimes in place for those who broke the law.

What the Victorian period is not known for, are the kinds of crimes we see in Britain and across the world today. Gun crime, riots, muggings, and terrorism: crimes which are very much considered to be born out of a modern age. The dilemmas of maintaining order, the questions about arming our police, deciding what appropriate force is and our police being killed in the line of duty are areas considered to be 19th-century debates.

Bombers, Rioters and Police Killers by Simon Webb, is a fascinating and enlightening account of the reality of violent crime and disorder in Victorian Britain. It is an account which dispels these myths and lays bare that the crimes we see today were not only prevalent in Victorian Britain, but they were a significant part of Victorian life.

Historical true crime books can often fall victim to being very dry in their narrative, especially when discussing a range of offenses from a particular period in history. They can get bogged down with so many facts, dates and details that your mind inevitably starts to wander.  Bombers, Rioters and Police Killers, however, is quite the opposite. It is engaging and light in its explanations while still providing plenty of the detail you are looking for when reading about true crime.

Simon Webb is an accomplished non-fiction author with a string of successful titles including First World War Trials and Executions and British Concentration Camps. He is also a writer for influential newspapers the Times Educational Supplement, Daily Telegraph, Guardian, and Independent.

His skill at non-fiction lies in his ability to bring research, facts, and history together and intertwine them into an enticing read without falling foul of the dull and the repetitive. What I particularly liked about this book were the many comparisons made between the criminal events in Victorian Britain and our recent events, the attitudes of people involved and of the media within both time periods.

“Civil disorder, terrorism and violent crime have always been with us; despite our best efforts to create for ourselves an imaginary world in which our country was never plagued by such undesirable things.”

These inclusions gave power to this writing and highlighted just how relevant an understanding of Victorian crime is when we are considering criminal behavior and crime in modern-day Britain. The late 18th century Gordon Riots, for example, was a week of utter turmoil where the city of London was severely damaged by 50’000 people burning, stealing and fighting their way through the streets.  Newgate Prison, the main prison in the area at that time, was entered, inmates were freed, and the Bank of England was a target for attack.  The military was brought in to restore order, and they killed hundreds as they did so.

Comparisons are drawn between the more recent riots in 2011 where groups of youth looted their way through the streets of London, Manchester, Birmingham and other cities across England.  The notion of such youth rioting simply because they could be a sign of modern Britain’s downfall is successfully challenged with the facts that “behaviour of this sort is really a recurring theme over many centuries in Britain.”

Note that during the Victorian period, few rights were available to the everyday man.  There was no right to vote, no say on the country’s main issues and no option to get involved in decisions affecting the nation.

The Gordon Riots are not the only example of the general public kicking back and taking control.  “The Evil May Day” as it has become known, was a traditional day for high jinks and misbehavior and strict curfews were put in place to try and prevent mayhem only to be ignored.  In 1577 over 5000 soldiers were ordered to take charge of rioting mobs with “13 ringleaders of the riot subsequently hanged.”

Another area discussed extensively in Bombers, Rioters and Police Killers is the reaction to local police forces being implemented in Victorian Britain.  We learn how the Metropolitan Police Force began in 1829, eight years before Queen Victoria came to the throne, and the reasons for this move to using localized police over using the military to control disorder.

“It’s difficult to believe that there was an epidemic of gun crime that led to the widespread arming of the police and a campaign of terrorism that included a series of bombings on the London Underground.”

As time moved on, the Victorians did not adjust well to this change. For them, these were bodies of people being put in place to inhibit their lifestyles and control their movements, and as such, police officers were in great danger with many of the population at that time openly looking for opportunities to cause them harm.  The murder of a police officer then, “simply wasn’t newsworthy” compared to how it is today.

Simon Webb describes how the brutal murders of police officers were commonplace and once again dispels the myth that violence against the police is a modern phenomenon.  ‘Killed In The Line of Duty,’ Chapter 6 tells of these murders and the public’s attitudes towards them with the clear message that in Victorian Britain, attitudes towards police were so damaged people thought that these officers deserved to die.

The prevalence of mugging was also very high in Victorian Britain.  A particularly nasty practice was called ‘garrotting’ where an unsuspecting and innocent pedestrian was surrounded by three or four men.  One would press hard with an arm around the victims’ throat while the rest would search through their pockets.  Victims, if they survived, were often left beaten and severely injured.

More recent examples of riots and disorder are discussed by Simon Webb; the Poll Tax Riots of 1990, the tuition fees demonstrations of 2000 which included an attack on the car carrying the Prince of Wales through London.  All these examples took place in London’s West End, one of the most highly regarded and prosperous areas of the capital city.  The public was concerned this signified a disintegration of society with the order being broken.

However, the history of riots in this area is plentiful with Victorian Britain seeing its fair share.  In 1886, Britain was in a deep recession, stuck in unemployment and poverty. A meeting arranged by the London United Workmen’s Committee to call for more support for the unemployed was somewhat hijacked by a small group of Social Democrats.

This group called for an uprising of the common worker to overthrow the corrupt system as they saw it.  A call many of the 20’000 strong crowd answered, and chaos descended. Now known as Black Monday or the West End Riots, looting, fire-raising, muggings and property damage took over as citizens marched through the streets.

The message Simon Webb is portraying through Bombers, Rioters and Police Killers is an important one.  The treatment of many crimes and criminal behaviors plaguing Britain today should be in perspective. Blaming a society fragmented due to poor parenting, a lack of values and youth having no purpose and engaging in mindless violence, while influential, are not necessarily the full picture.

Crime is not being experienced in modern-day Britain without precedent, and the Victorian era is a prime place to look for that pattern.  Many will be surprised at the parallels between Victorian Britain and Britain today shown in this book.

This is a well organized, educational and enjoyable book to read.  With comparisons and discussion of modern crimes against Victorian crimes, it is a highly relevant book with an important message. Any fan of true crime and especially historical true crime in Britain will not fail to be impressed by Bombers, Rioters and Police Killers and it is an excellent read I would highly recommend.

You can purchase a copy of Bombers, Rioters and Police Killers: Violent Crime and Disorder in Victorian Britain by Simon Webb at Pen & Sword Books.

The popular image of Victorian Britain is an ordered, well-behaved and well-mannered society; it is not of an era littered with riots, violent muggings, and terrorist attacks. Bombers, Rioters and Police Killers by Simon Webb sets the record straight by laying bare the reality of Victorian crime. An accomplished non-fiction author and writer, Simon Webb presents a well-researched and expertly organized book that is enjoyable, enlightening and engaging to read. The inclusion of modern day examples of rioting and crimes against police in a direct comparison to events from Victorian history showcases the parallels that are present. With chapters covering the murder of police officers, bombings, and terrorism, rioting and the use of the military to control disorder, the narrative is filled with examples and tales of significant events throughout Queen Victoria’s reign. An excellent read for anyone interested in British criminal history and true crime.