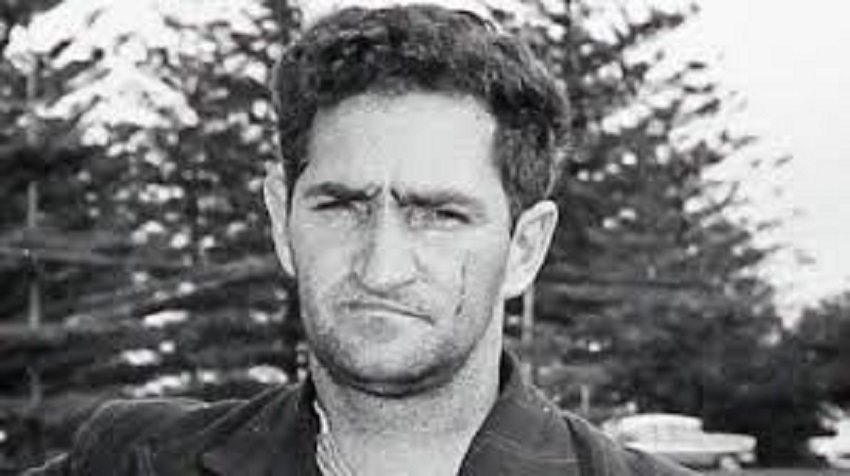 Share on FacebookShare on TwitterShare
In the early 1960’s Western Australia was gripped by a series of killings which took place inside the victims’ homes in the dead of night. Killings which saw a range of murder weapons used and victims seemingly picked at random, this was a serial killer who was going to be difficult to find.

In 1963, the discovery of a rifle hidden in undergrowth led to a police sting, lying in wait for their killer to return for his weapon.  Eric Edgar Cooke was arrested in August 1963 and confessed to many of his murders pleading not guilty by reason of insanity at his trial. Convicted of willful murder on 28 November 1963 he was sentenced to death by hanging.  Cooke was hanged on 26 October 1964 after making a last-minute confession to the murder of two further women.  The terror which had gripped Perth, Australia was over and a man with a lust for murder was stopped and brought to justice.

Eric Edgar Cooke was born on 25 February 1931 in  Perth, Australia.  His father was an alcoholic giving him and his two younger siblings a dysfunctional, violent and very unhappy home life throughout his childhood.  Alongside regular beatings from his father, Eric Cooke was a clumsy child with a habit of injuring himself, landing in the hospital for head injuries on more than one occasion.   A child with suspected brain damage grew into a boy who suffered frequent blackouts and crippling headaches.

Born with a hare lip and cleft palate, Cooke was noticeably different from other children in appearance, a fact which encouraged teasing and bullying. His health problems, home life, and difficulties socially ensured Eric Cooke struggled with his confidence and self-esteem and was generally considered to be a very emotionally unstable child.

As a teenager, he became involved in petty crime and vandalism in and around his neighborhood.  After an 18-month sentence in jail for arson, Eric Edgar Cooke escalated his criminal activities to house-breaking, sneaking into other people homes looking for valuables with a tendency to cause damage where he could in order to leave his mark.

At the age of 18, on 24 May 1949, Cooke was sentenced to three years in prison after being arrested for arson and vandalism.  An inexperienced criminal he was easily caught after leaving his fingerprints at the scene of his crimes.  Upon his release, he was rejected by the Army due to his juvenile criminal record but not before undergoing basic training including the use of firearms.

Eric Edgar Cooke married aged 22 to 19-year-old Sarah Lavin and went on to have seven children. However, his criminal ways continued with regular arrests for theft, house-breaking, and voyeurism.

An Escalation To Murder

On Australia Day, the 26 January 1963 the public were horrified when a series of shootings began happening in and around the suburbs of Perth in the dead of night.  In what appeared to be random attacks mainly taking place at residential homes, no one knew who was behind these killings or why.

Initially taking aim at a terrified couple in a parked car, they were injured with bullet wounds to the neck and hand.  Next, Brian Weir was shot in the head as he lay sleeping with his front door left unlocked.  Seriously injured, Mr Weir barely survived.  Doorbells were rung and doors were knocked awakening unsuspecting occupants who were then shot at point-blank range when they opened their doors.  The shootings continued throughout the night with a total of five people being shot and three being killed.  An evening of terror which earned this killer the nickname of The Night Caller.

Over the next few months, his random killings continued while police urged the public to be vigilant and to lock their doors at night. Eric Edgar Cooke’s victims included Jillian Macpherson Brewer, 22; Brian Weir, 29; John Sturkey, 19; George Walmsley, 54; Shirley Martha McLeod, 18; Constance Lucy Madrill, 24; Patricia Vinico Berkman, 33; and Rosemary Anderson, 17. His crimes were opportunistic and used varied methods. Moreover, his victims shared no obvious common traits making predicting where he would strike next and against who an almost impossible task.

Eric Edgar Cooke did not keep the same modus operandi across his killing period.  He used different weapons in different attacks, sometimes shooting his victims, sometimes stabbing, he killed inside houses and out in the open; facts which made it harder for police to link the murders to one individual.

Two men stood trial and were convicted of murders actually carried out by Eric Edgar Cooke.  These were wrongful convictions for the murders of Jillian Macperson and Rosemary Anderson; the two murders Cooke finally confessed to before his execution. Despite Cooke’s 1963 confession, Darryl Beamish served 15 years, while John Button was sentenced to ten years with the state not believing Eric Edgar Cooke’s confessions.

In 2002, the Court of Criminal Appeal quashed Button’s conviction. Button’s success opened the way for an appeal by Darryl Beamish, who was acquitted in 2005. In both cases, the appeal judges found that the murders had ‘probably been committed by Cooke’.

Eric Edgar Cooke was caught once again due to forensic evidence when his fingerprints were matched to a rifle found abandoned in bushes in Mount Pleasant.  Throughout his younger years and his house breaking career, Cooke found himself in the hands of police due to leaving evidence at the crime scene.  Once ballistic tests had confirmed this rifle had been used in an unsolved murder, police replaced it with a look-a-like and lay in wait for its owner to return.

Their patience paid off when 17 days later, Eric Edgar Cooke arrived to claim his weapon.  Once arrested he shocked investigating officers with his confident confessions to eight murders and 14 attempted murders along with hundreds of burglaries and a spree of other more minor crimes.  He remembered every detail and appeared to enjoy giving detectives his detailed statements in relation to each and every crime.

Despite his gleeful confessions, Eric Edgar Cooke pleaded not guilty on the grounds of insanity when he came to trial. His defense counsel introduced evidence of his childhood, the violence he experienced from his father and witnessed against his mother.  The head injuries and suspected brain damage along with a claim that Cooke suffered from schizophrenia.  A claim shot down when Dr AS Ellis, Director of Mental Health Services assessed him and came to a different conclusion.

Declared sane, no further assessment of Cooke’s mental health was made and he was quickly convicted of murder at the Supreme Court of Western Australia in November 1963.