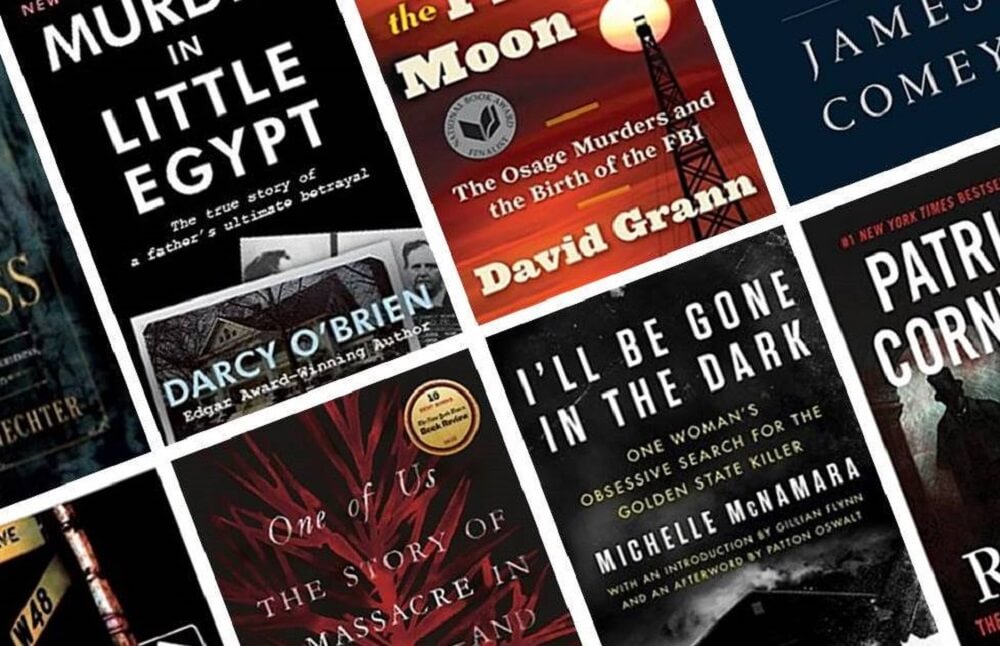 The true crime genre is one of the most popular collections of non-fiction books people are reading today. A fascination with crime and criminal behavior combined with excellent authorship, research skills, and story-telling makes for an attractive and exciting read for bookworms worldwide.

Their appeal centers on truth and reality. The stories told in these books, whether they are from the perspective of victims, investigators, lawyers or criminals themselves, are all true and based on fact. The text inside these pages opens up the world of human psychology and provide an opportunity to learn and gain an understanding of the extremes of human behavior, most often on the darkest level that exists.

Below are some of the bestselling true crime books of the month according to Amazon. Discover the most talked about new books on true crime and see for yourself which will become your next read.

Murder in Little Egypt: The True Story of a Father’s Ultimate Betrayal

Fusing the narrative power of an award-winning novelist and the detailed research of an experienced investigator, author Darcy O’Brien unfolds the story of Dr. John Dale Cavaness, the southern Illinois physician and surgeon charged with the murder of his son Sean in December 1984. Outraged by the arrest of the skilled medical practitioner who selflessly attended to their needs, the people of Little Egypt, as the natives call their region, rose to his defense. But during the subsequent trial, a radically different, disquieting portrait of Dr. Cavaness would emerge.

Hell’s Princess: The Mystery of Belle Gunness, Butcher of Men

In the pantheon of serial killers, Belle Gunness stands alone. She was the rarest of female psychopaths, a woman who engaged in wholesale slaughter, partly out of greed but mostly for the sheer joy of it. Between 1902 and 1908, she lured a succession of unsuspecting victims to her Indiana “murder farm.” Some were hired hands. Others were well-to-do bachelors. All of them vanished without a trace. When their bodies were dug up, they hadn’t merely been poisoned, like victims of other female killers. They’d been butchered.

I’ll Be Gone In The Dark: One Woman’s Obsessive Search For The Golden State Killer

For more than ten years, a mysterious and violent predator committed fifty sexual assaults in Northern California before moving south, where he perpetrated ten sadistic murders. Then he disappeared, eluding capture by multiple police forces and some of the best detectives in the area. Three decades later, Michelle McNamara, a true crime journalist who created the popular website TrueCrimeDiary.com, was determined to find the violent psychopath she called “the Golden State Killer.”

Revised and updated, The Westies is the bestselling account from T.J. English of New York’s notorious Westies gang, which ruled Hell’s Kitchen in the 1960s, ’70s and ’80s–and which then-prosecutor Rudolph Giuliani called: “The most savage organization in the long history of New York street gangs.” Even among the Mob, the Westies were feared. Starting with a partnership between two sadistic thugs, Jimmy Coonan and Mickey Featherstone, the gang rose out of the inferno of Hell’s Kitchen, a decaying tenderloin slice of New York City’s West Side.

In his book, former FBI director James Comey shares his never-before-told experiences from some of the highest-stakes situations of his career in the past two decades of American government, exploring what good, ethical leadership looks like, and how it drives sound decisions. His journey provides an unprecedented entry into the corridors of power, and a remarkable lesson in what makes an effective leader.


One of Us: The Story of A Massacre in Norway – And Its Aftermath

On 22 July 2011 Anders Behring Breivik killed 77 of his fellow Norwegians in a terrorist atrocity that shocked the world. One of Us is the definitive account of the massacres and the subsequent trial. But more than that, it is the compelling story of Anders Breivik and a select group of his victims. As we follow the path to their inevitable collision, it becomes clear just what was lost in that one day.

Killers of the Flower Moon: The Osage Murders and the Birth of the FBI

In the 1920s, the richest people per capita in the world were members of the Osage Nation in Oklahoma. After oil was discovered beneath their land, the Osage rode in chauffeured automobiles, built mansions, and sent their children to study in Europe. Then, one by one, the Osage began to be killed off. The family of an Osage woman, Mollie Burkhart, became a prime target. One of her relatives was shot. Another was poisoned. And it was just the beginning, as more and more Osage were dying under mysterious circumstances, and many of those who dared to investigate the killings were themselves murdered.

From New York Times, bestselling author Patricia Cornwell comes Ripper: The Secret Life of Walter Sickert, a comprehensive and intriguing exposé of one of the world’s most chilling cases of serial murder—and the police force that failed to solve it. Vain and charismatic Walter Sickert made a name for himself as a painter in Victorian London. But the ghoulish nature of his art—as well as extensive evidence—points to another name, one that’s left its bloody mark on the pages of history: Jack the Ripper.