Home » Book Reviews » A Father’s Story by Lionel Dahmer: One Man’s Anguish at Confronting the Evil in His Son

A Father's Story is an exploration of genetics, nurture and psychology in trying to find reasons for why a beloved son, Jeffrey Dahmer, could become a serial murderer on the most horrific scale 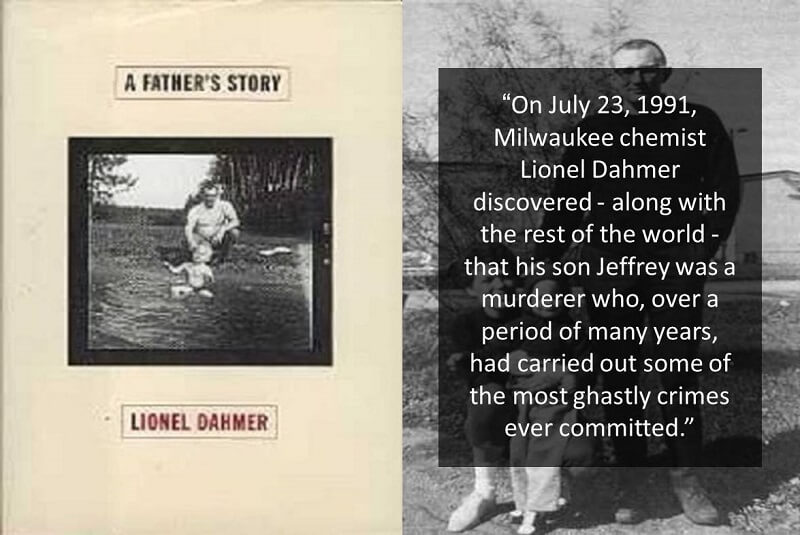 Share on FacebookShare on TwitterShare
“This book is not the story of Jeffrey Dahmer at all, but of a father who, by slow degrees, came to realize the saddest truth any parent may ever know: that following some unknowable process, his child had somewhere crossed the line that divides the human from the monstrous.”

Jeffrey Dahmer murdered 17 young men and boys between 1978 and 1991 in Milwaukee, Wisconsin. His father Lionel Dahmer discovered at the same time as the rest of the world that his son, the boy he had raised and nurtured, was, in fact, a brutal serial killer engaging in dark fantasies. ‘A Father’s Story‘ is not a book about Jeffrey Dahmer the serial killer and his grisly crimes. It is a book about Lionel Dahmer, a father trying to understand what happened to his son and searching for reasons why he did what he did. A father who predominantly, worries it was his fault.

“. . . I wasn’t told what these other mothers and fathers were told, that their sons were dead at the hands of a murderer. Instead, I was told that my son was the one who had murdered their sons.”

At the height of his killing period, Jeffrey Dahmer would entice his victims back to his home with offers of drink and sexual favors. As soon as his guest made to leave he would kill them, wanting to keep them with him. He had fantasies of a sexual nature which extended to his victims after they were dead.

He would keep their bodies, mutilate them and engage in cannibalism. With body parts kept in all areas of his flat, gruesome polaroid’s of his victims in various poses and stages of dismemberment, these were murders that made headlines around the world. In A Father’s Story, Lionel Dahmer analyses his son’s childhood, his upbringing and the actions of himself and his wife in exploring the man Jeffrey Dahmer grew up to be.

While the crimes of Dahmer are not directly discussed you are aware of them. As you read this writing you become acutely aware that behind these crimes, behind these horrendous acts, is a person, an individual. You begin to ask your own questions about why and how a child can grow up to be someone who commits some of the most heinous crimes in American history? You watch while you read, feeling as though you are peering into a hidden private area that you shouldn’t be looking at. Through the memoir of Lionel Dahmer, you see a baby Jeffrey Dahmer grow into a young child.

His behaviors and his interests once thought to be the normal behaviors of a curious young boy become under suspicion. They become questions; was his interest in bones and dead animals a sign?

Lionel Dahmer: “How could anyone believe that his son could do such things?”

Lionel Dahmer opens up his memories and his family history as he gently leads us through the early life of Jeffrey Dahmer. We learn those childhood details, the days out, the funny moments but we also see behind the closed-door and into the marital problems, the dysfunction in the household and the slow descent which saw Jeffrey Dahmer begin to retreat from all those around him.

In an exceptionally personal memoir, Lionel Dahmer is exploring his child’s mental states while at the same time taking a close look at his own. He analyses his own difficulties in expressing emotions and wonders if he has passed this onto his son. Could this be the foundation for an emotionally disturbed young man to take a sinister turn?

Lionel Dahmer examines his own childhood where he struggled with many similar issues…confidence, self-esteem and the expression of feelings and emotions. He considers whether he guided and helped his son through these issues as his father did for him. He fears he didn’t, leaving Jeffrey to turn inward, become introverted and potentially enter the dark inner world of fantasy which he eventually made into a reality.

“Now, when I think of him at that point in his life, I see him caught in his own murderous fantasies, trapped in the memory of a murder he had already committed, barely able to connect to any other part of reality. For him, a sudden, uncontrollable act of violence and sexual mutilation had thrust any hope for an ordinary life into a world that was utterly beyond his grasp.”

Lionel Dahmer openly discusses his troubled marriage to Jeffrey’s mother, how this turmoil probably distracted him from his son and while he could escape the atmosphere in the house through his work, his son had nowhere to go and was left alone to endure it.

An unsettled and dysfunctional home life, with a father not there and a mother who appears to have had her own inner turmoil issues contributing to their unsettled way of life. They were distracted from their son, they did not notice things which were going on with him, behavioral issues, emotional issues, or at least this is the consuming concern of Lionel Dahmer.

There is a clear element of self-blame in that he somehow should have known, should have intervened or spotted something that could have stopped this from happening. He could have helped his son before it was too late. Powerful thoughts from a father who is in clear turmoil trying to understand and explain his son’s actions and behavior.

“By the fall of 1988, there were far , far more things that I did not know about my son than I did know about him. I didn’t know that he had already killed four human beings, two of them in the basement of my mother’s house.”

Chapter Eight recounts the harrowing circumstances of Lionel Dahmer finding out his son had been arrested for murder and slowly as more details are revealed about the extent of his son’s actions and crimes, his reaction to this news. A rare and honest insight into a father discovering his son is not who he thought he was.

This is a book that is deeply troubling and the sheer devastation and bewilderment of Lionel Dahmer jump out of the pages.  Equally A Father’s Story is an exploration of genetics, nurture and psychology in trying to find reasons for why a beloved son could become a serial murderer on the most horrific scale. It is a book you cannot read lightly and it is a book you are unlikely to ever forget.

You can purchase a copy of A Father’s Story by Lionel Dahmer at Amazon.

Jeffrey Dahmer, also known as the ‘Milwaukee Cannibal’ murdered 17 young men and boys between 1978 and 1991 in Milwaukee, Wisconsin. In ‘A Father’s Story’, Lionel Dahmer reflects and relives the childhood of his son in an attempt to understand and explain his behavior. A man who discovered at the same time as the rest of the world that his son was a serial killer, his devastation and horror are clear. In a deeply personal memoir, we watch a father ask if he was somehow to blame, analyzing and questioning his own emotions as well as his son’s. A book as disturbing as it is fascinating this is writing which is difficult to put down and will almost certainly leave a lasting imprint.