Jack the Ripper, Lizzie Borden, the Lindbergh Kidnapping, the Zodiac killer and the JonBenet Ramsey murder are all covered in detail with an analytical slant 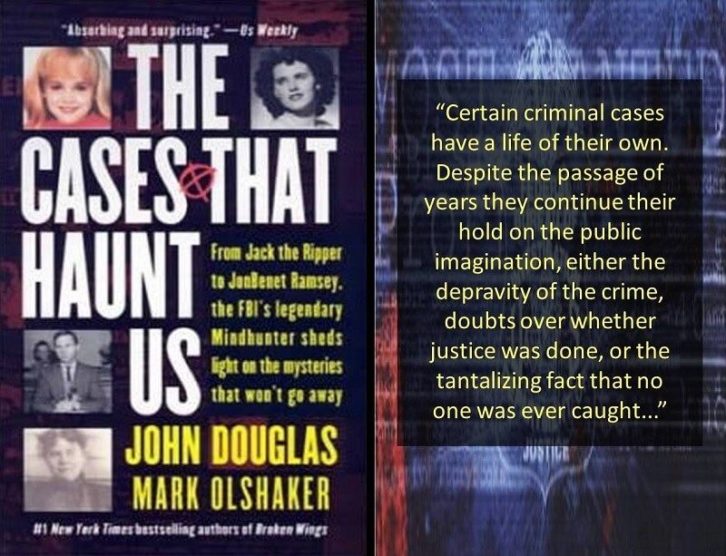 “From Jack the Ripper to JonBenet Ramsey, the FBI’s legendary Mindhunter sheds new light on the mysteries that won’t go away.”

Some crimes are impossible to forget and when these cases are high-profile with international attention, for those trying to solve them the pressure is on. Using psychological profiling and modern behavioral analysis, retired FBI profiler John Douglas opens the case files of some of the most haunting unsolved cases in America.

John Douglas is the former head of the FBI’s Investigative Support Unit and a leader at the forefront of the technique of criminal profiling.  He is a man who has worked on some of the most high-profile criminal cases in our history including the JonBenet Ramsey murder and has spent hours interviewing notorious serial killers including John Wayne Gacy, Jeffrey Dahmer, Charles Manson and Ted Bundy.

In ‘The Cases That Haunt Us’ eight shocking and unsolved cases are examined both from the history books and modern-day. John Douglas works through the evidence in each case applying criminal investigation and behavioral analysis in an effort to discover new evidence, build new psychological profiles and identify new suspects.

Jack the Ripper, Lizzie Borden, the Lindbergh Kidnapping, the Zodiac killer and the JonBenet Ramsey murder are all covered in detail and with an analytical slant. Further cases including the Black Dahlia murder, the case of Lawrencia ‘Laurie’ Bembenek and the Boston Strangler are also given attention.

If you have ever been curious about these cases, the evidence found, the suspects and the theories this is a book you will be interested in. First published in 2000, almost all of these cases remain unsolved, and it is a book just as relevant and educational today 17 years later as it was then. The focus is the use of profiling to gain an understanding of a killer, their motivations, and modus operandi and ultimately try to seek them out and identify them.  It is a book which provides a fascinating insight into how FBI agents use such techniques when assessing a criminal case and highlighting just how much the theory behind these methods has developed over the years.

Each chapter deals with an individual case. Exploring the case history of what we know already, through to any arrests made or trials which took place. Chapters are lengthy, and they are in-depth, ensuring you read all the facts and the evidence.  Included within each case analysis is what the behaviors surrounding the crime and methods of killing tell us about the individual responsible.  How psychology and behavioral analysis can give us clues about the type of person who has carried out this crime and how we can use knowledge of human behavior to gain an insight into a killer’s actions and state of mind at the time of a murder.

The scene of the crime is most often the starting point for such analysis where how a person has been killed, where the body has been found, and in what position, the clothing and belongings of that individual all can be used to begin to build a profile of the person that is responsible.

In the case of Jack the Ripper where five women were murdered and mutilated on the streets of Whitechapel in London in 1888, the investigative tools of the time were considerably less advanced than they are now.  Furthermore, not only was DNA analysis, fingerprint technology, and forensic science unavailable to the police officers of the era but the analytical thinking and analysis of the behaviors present in each murder was also not something that had yet come to the investigating officers.  At that time unless there was a witness or piece of evidence which clearly linked an individual to the crime, such crimes were rarely solved.  No doubt if these horrific murders had been carried out today it is likely forensic science would have provided the evidence needed to solve them.

Each chapter is split into sections exploring the critical aspects of the case; the victimology, suspects, the behavioral case and with some a full psychological profile is provided. This is a book which highlights the complexities of criminal investigation and the importance of the crime scene itself.  To effectively solve a crime all agencies and departments need to be working together, from the first police in attendance at the scene, to the forensic teams and the chief investigating officers.

This network is where mistakes can be made, irregularities and inconsistencies which can be the difference between finding the culprit and bringing them to justice and a crime lying cold and unsolved.

In the final chapter of The Cases That Haunt Us a discussion on the advances in technology, theory and training are provided alongside some clear points about the importance of different stages of an investigation, communication with others investigating the case and the use of psychological profiling and where it can help in a case.  This book also provides a full index allowing for quick reference to the various terms and subjects covered in the text.

A well-rounded, detailed and extensive book which delivers on its promise on the front cover.  If the nature of unsolved crimes and the application of psychological profiling through the FBI is why you picked up this book, you will be rewarded with a fascinating and satisfying read.

You can purchase a copy of The Cases That Haunt Us by John Douglas and Mark Olshaker at Amazon.

The Anatomy of Denials