In June 1994, Fairchild Air Force base in Washington State found itself at the center of two devastating tragedies, the rage of a single gunman Dean Mellberg and pilot Lt. Arthur 'Bud' Holland's daring manoeuvre in a B-52 bomber. 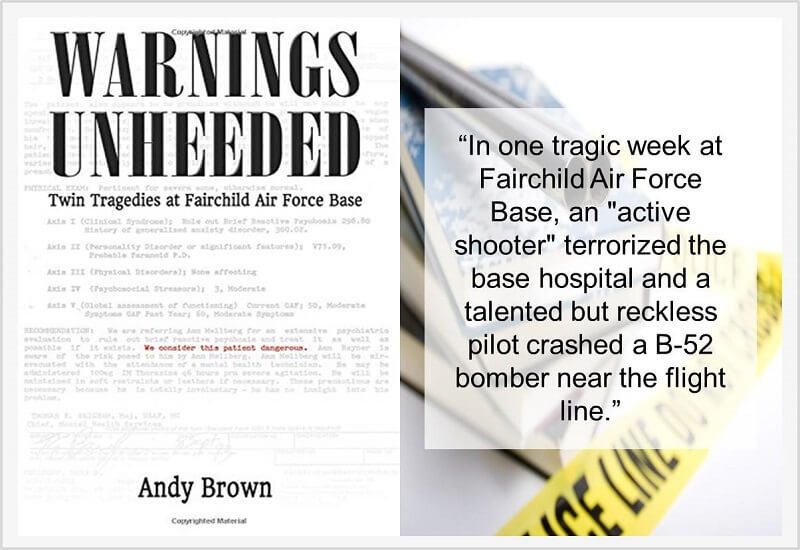 Share on FacebookShare on TwitterShare
“Using the words of the people who experienced the tragedies, the book provides an in-depth look at the before, during and after of a preventable “active shooter” incident and an avoidable fatal plane crash.”

In just one week in June 1994, Fairchild Air Force Base in Washington State saw two tragic events. One, a horrific act of violence by a lone gunman who entered the base hospital with an assault rifle, and the second, a devastating air crash that saw a B-52 bomber fall out of the sky and hit the ground in a ball of flames.

Andy Brown is a retired US Air Force Staff Sergeant and the man hailed as a hero within the mass shooting carried out by Dean Mellberg at Fairchild’s Hospital on 20 June 1994. On duty that day as a Security Policeman, Brown entered a scene of terror and brought it to an end by courageously shooting the gunman dead.

His book “Warnings Unheeded – Twin Tragedies at Fairchild Air Force Base” tells the untold stories of these two events and he tells them in parallel, highlighting the warning signs and the oversights made in the preceding months and years that led to both these tragedies occurring.

“I leapt from the bike and drew my Beretta as I knelt on the sidewalk. My hands gripped the pistol and brought it in line with my target as I yelled, “Police! Drop your weapon! Put it down!” The man continued toward me and fired again to his side. I yelled again, “Police! Drop it! Put it down now!” His pace quickened and he aimed the rifle in my direction.” – Andy Brown

On 20 June 1994, 20-year-old Dean Mellberg, a former US Airman, entered the Fairchild Air Force Base hospital and opened fire with an assault rifle. His first shots were targeted towards psychiatrist, Maj. Thomas Brigham and psychologist, Capt. Alan London had assessed him the year before and recommended he be discharged. Mellberg then walked through the hospital corridors firing randomly at anyone he saw.  He killed five people and injured twenty-two in three minutes of horror.

As he strode through the parking lot of the hospital he is stopped from his killing spree by Andy Brown, who shouts at him to lower his weapon before firing fatal shots as Mellberg refuses to comply and begins to fire at him. If not for Andy Brown’s actions that day, many more lives would have been lost.

Dean Mellberg had served in the US Air Force for 22 months since his joining date in 1992.  During that time he had repeatedly been referred for psychiatric assessment due to his demeanor and behavior. Initial reports suggested Mellberg suffered from “a generalized anxiety disorder with strong obsessive traits” and was unsuitable for service within the Air Force. The first of many recommendations was that airman Mellberg was suffering from mental health problems.

By September 1993 concerns were turning towards the risk he may pose to others. Months in hospital in a psychiatric ward over the winter of 1993 once again resulted in recommendations that he was “unfit for further military service” and discharged, however, senior military officials did not respond.

By the time Mellberg was discharged, just one month before he opened fire at Fairchild, he had been assessed and recommended for discharge at least four times. Andy Brown wrote Warnings Unheeded not to assign blame but to educate. To inform of what happened in each of these cases and highlight how improvements could be made to try and prevent such tragedies in the future.

Related: Kitty Genovese: A Public Murder and its Private Consequences

In the seven years following that devastating week, Brown has researched these two cases from start to finish.  He has poured over witness statements, investigation reports, and letters and personally interviewed those who were involved and affected.

Throughout this journey, he has not only tried to uncover the lessons that can be learned but also provide some healing to himself and others after battling his own feelings and emotions in understanding what it means to suffer from Post Traumatic Stress Disorder. It is a detailed and moving account of these two tragedies telling their stories as they unfold while equally serving as a solid reference for how two individual men on entirely different life courses when left to their own devices, caused so many deaths and impacted so many people.

On 24 June 1994, just four days after the mass shooting, a B-52 plane crashed on an air show practice flight at Fairchild Air Force base.  The pilot, Lt Col Arthur ‘Bud’ Holland, had attempted a full 360 degree turn around the control tower at a low altitude where he lost control of the aircraft.

The huge plane went down in front of the horrified ground crew and the wife and children of Col. McGeehan, the co-pilot on the flight, who were there to celebrate his last flight before he retired. Upon impact with the ground, the place exploded into flames. All four crew members on board, Bud Holland and his co-pilot, Mark McGeehan, the navigator Ken Huston and observer Robert Wolff, were killed. Bud Holland was an excellent pilot with a good track record however, he began flying aggressively, performing low flyovers and maneuvers to please the crowd rather than adhere to safety.

Repeated comments of “he was not reprimanded, he was rewarded” echoed around the base as people talked of Holland’s dangerous flying, his history of pulling off amazing but risky maneuvers, and how he was praised by the ground staff and the media for his showmanship, but when legitimate concerns about his safety and his attitude were raised, senior officials did nothing.

A number of Holland’s co-workers had refused to fly with him concerned about his disregard for safety. Reports to senior officers of such concerns fell on deaf ears.  No action was taken and this individual was allowed to continue to fly and continue to be dangerous.  The end result was this second tragedy in less than a week.

Related: A Good Month for Murder: The Inside Story of a Homicide Squad

“Based upon clear and convincing evidence, my opinion is that the 24 June 1994 aircraft accident was the result of pilot error, crew error, and several breakdowns in supervision and leadership. The accident was preventable.” – Colonel McConnell

Warnings Unheeded works its way through the details of events leading up to each incident, weaving chapters dealing with the two separate cases in between each other. What this successfully achieves is to explain the buildup to each tragedy, how these circumstances were unfolding in parallel over a number of years before they both exploded, leaving lives lost and lives destroyed.

Andy Brown has channeled his experiences and the clear understandable impact these events had on him into a book highlighting where intervention could have taken place, but he does this without blame and without accusation.

It is a detailed assessment with the benefit of hindsight in an attempt to provide lessons and insight into how such events can transpire, the visible warning signs, and why such warnings should never be ignored.

A moving piece of writing that has been created through deep thought, evaluation, and soul-searching. Through diligent research and rare honesty, Brown has provided a true insight into the aftermath of both these tragedies, a part of the story so many books do not explore. The effects on survivors in trying to deal with the trauma they have gone through, their nightmares, and their depression. He provides a subjective narrative on his own experience with PTSD, what he has learned and how he has found ways to deal with it day after day.

Both Dean Mellberg and Bud Holland displayed behavior that others recognized as red flags.  Behavior that caused enough concern for it to be reported through the appropriate channels in the expectation that action would be taken.  In both cases, this action did not materialize and the events on two separate days in one week in June 1994 will be a lasting reminder as to why warning signs should always be addressed.  In Warnings Unheeded, Andy Brown has encapsulated the importance of these lessons and provided a book that serves a very important purpose.

You can purchase a copy of Warnings Unheeded: Twin Tragedies at Fairchild Air Force Base by Andy Brown at Amazon.

In the last week of June 1994, Fairchild Air Force base in Washington State found itself at the center of two devastating tragedies which took the lives of nine individuals and injured twenty-two. The rage of a single gunman with a history of mental health problems followed by a daring maneuver in a B-52 bomber by an experienced but daredevil pilot whose desire for showmanship outweighed his respect for safety. ‘Warnings Unheeded’ is the insightful, honest and admirable book written by Andy Brown, the man who stopped gunman Dean Mellberg in the height of his shooting spree. It is a book which reflects on these two events and the two men who caused them, leading the reader through their histories and the clear mistakes that were made in both cases. Both Dean Mellberg and pilot Lt. Arthur ‘Bud’ Holland exhibited behavior in the preceding years which raised red flags, and both were enabled to continue with no intervention. The success of Warnings Unheeded lies in Brown’s engaging and heavily researched accounts of these cases and his reflections and understandings of the aftermath for himself, the survivors and families wrapped up in these two events. An in-depth and moving read telling the untold story with an important message to give.