Home » Book Reviews » A Good Month for Murder: The Inside Story of a Homicide Squad

Journalist Del Quentin Wilber's account of just one month following the homicide squad of Prince George's County in Maryland. A month which saw 12 homicides in 28 days and had detectives on the hunt for a series of killers. 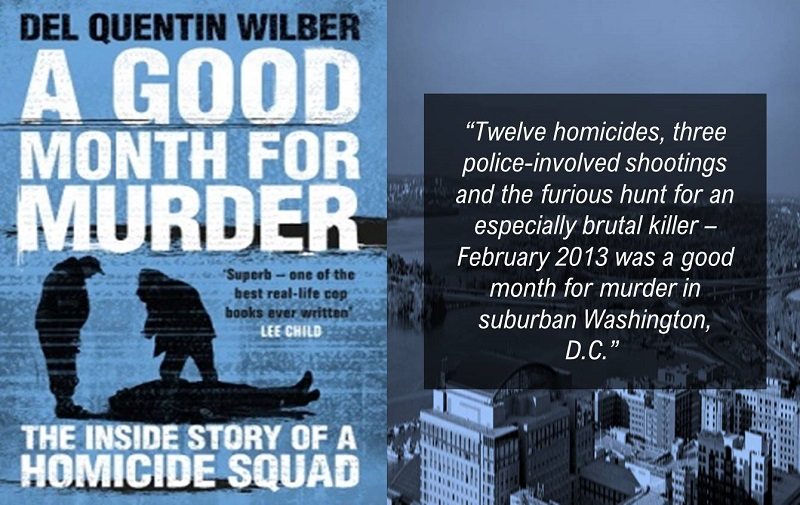 Share on FacebookShare on TwitterShare
“After gaining unparalleled access to the homicide unit in Prince George’s County, which borders the nation’s capital, Del Quentin Wilber begins shadowing the talented, often quirky detectives who get the call when a body falls.”

Prince George’s County lies on the border to Washington DC and author Del Quentin Wilber gains full access to their homicide squad, shadowing them from the moment they get the call of a murder taking place. The ebb and flow of cases are clear with some months giving up few calls for the eager and dedicated detectives to follow.  February 2013 however, was not one of those months.  February was busy with multiple cases keeping everyone on their toes.  February was a ‘good month for murder’.

There are twenty-five detectives and five sergeants in this homicide squad and February 2013 saw twelve murders in twenty-eight days. In A Good Month For Murder author, Del Quentin Wilber follows homicide detectives and documents this one month through their operations and their hunt for the criminals of Prince George’s County.

This book jumps straight in with a narrative in the Prologue following detective Ben Brown as he examines the crime scene of a shooting victim. There is no introduction, no explanation of what this book is going to tell you and how its material was gained. While this was a little unusual and for the first few pages leaves you with many questions you quickly become engaged with the trail these police officers are on to crack their case and catch their guy.

Opening with a map of Prince George’s County, Maryland displaying all the homicides that took place, their location, date and the names of the victims you are left in no doubt of the work required by the homicide squad in this area. Described as a ‘suburban sprawl of nearly 900’000 residents to the east of the nation’s capital’.  From 2001 to 2011, this county saw ‘at least 90 homicides a year, a staggering toll for a suburban jurisdiction of its size’.

Author Del Quentin Wilber is also the New York Times bestselling author of Rawhide Down an account of the attempted assassination of Ronald Regan.  He is a Baltimore Sun and Washington Post award-winning reporter who lives in Maryland himself.

What Del Quentin Wilber successfully achieves is portraying the frustrations, the tensions and the difficulties in trying to solve difficult and complex murder cases.  Working the crime scene, informing the victims’ families, following the evidence and interviewing and gaining useful information from suspects.

It is clear Wilber had the freedom to sit on the shoulders of these detectives as they desperately follow up leads. He watches quietly from the corner of ‘the box’, the windowless and barren interview room where suspects either sleep (a clear sign of guilt according to many) or fret and sob while they await the barrage of questions from two homicide detectives determined to get answers.

“As every homicide detective in the unit knows, only the guilty sleep in the windowless, eight-by-eight foot interview room known as ‘the box’.  The innocent pace, bounce on their toes, sob, even piss their pants in fear.  Who wouldn’t in this grim enclosure, with its grey walls, flickering lights, heavy door audible locked from the outside, and black video orb mounted in an upper corner? No, the innocent do not nap.”

Included also are the ‘rookies’ with their first time on the homicide squad and their eager determination, and desperation, to solve their first homicide and make a good impression on their superiors.  Being a homicide detective is an extremely difficult job where a case can come up that can throw even the most seasoned of detectives, especially if that case involves a child.

Their commitment, determination, and steel in doing their jobs day after day with no set hours and no clear boundaries is a takeaway message from this book. Day after day they are dealing with the kinds of acts from humanity that you cannot leave at the door when you go home. Obtaining justice for the victims and their families is a clear priority on the minds of all these detectives and this, in many terribly sad cases, is not always something they can achieve despite their best efforts.

Obtaining justice for the victims and their families is a clear priority on the minds of all these detectives and this, in many terribly sad cases, is not always something they can achieve despite their best efforts. The murder of 17-year-old Amber Stanley is one example. A young girl violently slain in her own bedroom by a bold intruder who left few clues. As the investigation wears on the motive for this murder is difficult to establish.  A girl with no enemies and no involvement in any activities or with any people, which could have led to her death.  Her step-sister, however, has a circle of friends who are more than questionable and could be the lead they are looking for.

This is an honest and unflinching account of the real-life work of homicide detectives.  It is not glossed over with a shine added for a TV show or a fiction novel, it is the true life reality of trying to deal with and solve homicides on a daily basis.  For anyone thinking of going into this field, this would be an excellent book to obtain an accurate sense of what the job is like.

The book is successful in highlighting not only the work and struggles involved in solving cases from a practical point of view but also the emotions that come with such work.  The upset, the frustration and the toll homicide cases take on the men and women that make up a homicide squad and on their own families.

“The veteran detective is PG’s version of Joe Friday – utterly ordinary, a forty-one-year old of average height and weight, with a round face and thick back hair speckled with grey.”

The narrative is easy to read and while it jumps from case to case and back again this serves to highlight the complex work carried out. When watching a TV crime drama, cases are sequential and nicely timed out with a satisfying conclusion at the end. The reality is much more brutal and the fast based nature and multiple case switching in this narrative does justice to this fact.  Once gripped it is difficult not to continue reading, wanting to know what happens in different cases, the outcomes of suspect interrogations and whether the case will be solved.

A Good Month For Murder reads like paced faced fiction, with vivid descriptions, detailed interactions and imagery which places you right there with the detectives.

The common terminology within such a squad is explained.  Terms which are openly understood within the unit such as ‘case face’; the ‘serious expression worn by all the units detectives when working a crime scene’. A case solved within 48 hours is called ‘a smoker’ and ‘a redball’ is  “a high-profie murder that must be solved, and solved yesterday”, such as the Amber Stanley case.

“Despite catching the new case Flores and Eckrich get not respite from midnight duty.  The unit’s workload is too heavy.  PG County’s homicide detectives do much more than investigate murders: each year they respond to scores of suspicious deaths, suicides, and police shootings.  Not infrequently, they have to waste valuable time investigating hoaxes involving text messages sent to strangers suggesting that someone has just buried a body.”

It is at the end of this book that you learn from the author how his collaboration with this police department came about.  A chapter you would normally find at the beginning as an introduction was a nice ending, answering those final questions in your mind about how this book was born.  As he states “Within two or three weeks I knew I had got lucky: it was obvious that PG County’s homicide detectives were as competent as they were colourful”.

An excellent read which I would highly recommend to any true crime fan or anyone interested in the true story of how a homicide squad operates and just what is involved in solving murder cases.

You can purchase a copy of A Good Month for Murder at Amazon.

If you didn’t know better you could easily mistake this book for fast-paced crime fiction. Cases develop and characters become more familiar the more you read. However, it is not fiction and what makes it all the more appealing is this book is journalist Del Quentin Wilber’s account of just one month following the homicide squad of Prince George’s County in Maryland. A month which saw 12 homicides in 28 days and had detectives on the hunt for a series of killers. A Good Month For Murder is a well put together narrative following cases, the evidence, the witnesses and the desire and determination to obtain justice for victims of brutal crimes. A rare insight into the internal workings of a homicide team, this book will not fail to satisfy readers of true crime and those with an interest in this field of work and the reality of day to day on the hunt for those who commit murder.

Where Chaos Reigns: Inside the San Pedro Sula Prison