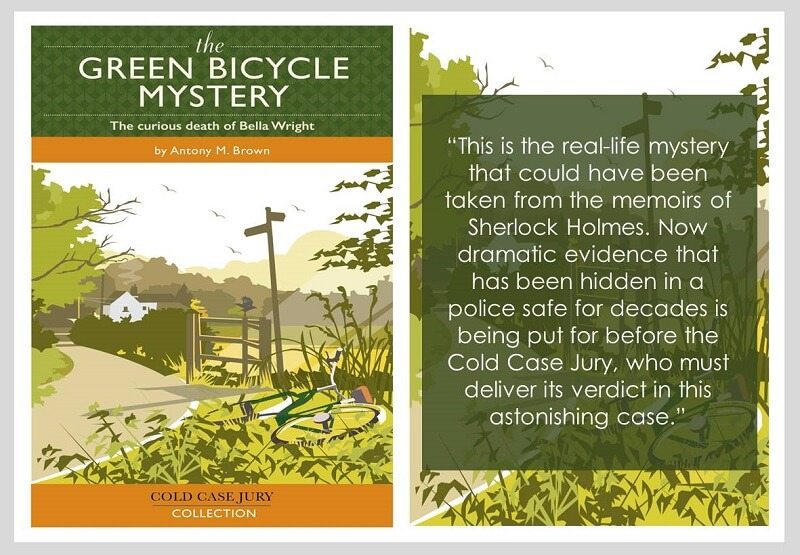 Share on FacebookShare on TwitterShare
“It is a case that could have been taken from the memoirs of Sherlock Holmes. A girl is found dead by her bicycle in a lonely country lane. The death is thought to be an accident, but the autopsy reveals that she was shot in the head. The only clue is that she was last seen with a man on a green bicycle, who seemingly vanishes into thin air….”

A farmer tending his land finds the grisly scene of a dead woman’s body next to her bicycle lying abandoned on a lonely lane.  It is the summer of 1919 in Leicestershire and a young woman has lost her life. One man stood trial for the murder of 21-year-old Bella Wright but a not guilty verdict set him free and sent this mysterious case back to cold and unsolved status.

Almost 100 years later questions are still being asked and the guilt or innocence of Ronald Light still unconfirmed.  Was it murder, manslaughter or misadventure?  Another case for the Cold Case Jury.

“The nature of the crime, the period in which it is set, the character of the victim and the sinister behaviour of the suspect each contribute to make this a classic case to put before the Cold Case Jury.” – Antony M. Brown

There are three theories as to what happened on that summer’s day in that isolated lane, each with their own merits but each without solid evidence behind them. In The Green Bicycle Mystery, historical true crime author Antony M. Brown reopens this cold case and painstakingly reviews the facts and the theories. Furthermore, in his unique style, he reconstructs the different versions of events which could have taken place resulting in the death of Bella Wright in accordance with the most plausible theories behind her death.

The Murder of Bella Wright

Bella Wright was a factory worker, living a happy, healthy life in the Leicestershire countryside.  She was a popular and social girl liked by everybody who encountered her making her untimely death all the more shocking.  On 5 July 1919, she left her parents’ home to visit her uncle and her cousin who she had not seen in some time.  It is here that the story of those last hours of this young woman’s life begins.

Arriving by bicycle, Bella’s relatives were delighted to see her. They were surprised however to find an older man hanging around outside their home waiting for Bella.

When asked, Bella told them he was a stranger who had overtaken her on the path on his own bicycle and she had exchanged pleasantries with him, but she could not think of a reason why he would be waiting for her. When leaving, Bella’s uncle spoke with the man.  He was older than Bella and had with him a distinctive green bicycle which featured as the topic of discussion. Despite his uneasiness, her uncle watched as Bella and the mysterious stranger rode off away from the house.  Less than one hour later, Bella Wright was found dead.

In the Green Bicycle Mystery, Antony M. Brown details what his known about this case.  About Bella herself, her background and her movements, that of her family and what was recorded regarding this older stranger who appeared to have taken an interest in her.  Using court transcripts, police statements, and previously published literary works, he has been able to build a complete picture of the events leading up to Bella’s death and the aftermath.  His writing is engaging and light and as a result, it is a pleasure to read.  Interest in the events of this tale is held throughout taking you deeper into the mystery the more you read.

Related: The Pearl Bryan Murder in Unwanted: A Murder Mystery of the Gilded Age

Upon first look, the scene where Bella Wright’s body was found appeared to be the location of a tragic accident.  A young girl riding home on her bicycle had fallen and hit her head.  A deep-thinking police constable, however, had too many questions and through dedication and determination and hours of searching found the piece of evidence which would blow this case wide open.  A single spent bullet found on the ground just yards from Bella’s body.  Bella Wright had not died from a head injury in a fall, she had been shot.

The man with the green bicycle quickly became the prime suspect in what was now looking like a murder case.  However, searches for his identity were fruitless until six months on a lucky find by a canal dredger. He pulled out of the river parts of a bicycle which was a distinctive color and of great interest to the police. Traces on the serial number led detectives to a Ronald Light, a man who had lived in Leicester at the time of Bella’s death but now resided in Cheltenham.

Ronald Light denied any involvement in the death of Bella Wright although admitted he was the mysterious stranger who cycled with her on the day she died.  He got rid of his bicycle in the river, he said, as he read about her death in the news along with the assumption that he was her killer and panicked, fearing he would be accused of a crime he did not commit.

Where this book comes into its own is the presentation of the various theories through reconstructions of events as to what may have happened that day. These reconstructions are in accordance with the testimonies and suggestions made at the trial of Ronald Light.

Firstly, the prosecution’s argument, that Ronald Light had made inappropriate advances towards Bella Wright after leaving her uncle’s home and when she rebutted him he became enraged and shot her dead. Secondly, the defense’s claim that while Ronald Light had met Bella on that day he had simply wished her a pleasant journey home and went on his own way leaving her alive and well that summer’s afternoon.

Her death due to a gunshot wound was, in this theory, a result of an accidental shooting by another party who may not have even known what they had done with the shooting of birds being commonplace in the area. His behavior in getting rid of his bicycle and not coming forward as the mysterious cyclist does not shine well on his character but does not mean he was a murderer.

“We have seen Light’s version of events on the fatal evening.  Not surprisingly, the story he tells is that he was innocently caught up in the tragedy.  This leads to perhaps the most important issues of all.  If this were true, why had light behaved as though he was guilty after the event?”  – Antony M. Brown

Another key feature of the Green Bicycle Mystery and the basis of the third theory in her death is the publication of a piece of evidence which only came to light after the trial and acquittal of Ronald Light.  Published in full at the end of this book, it is a statement by a Superintendent Bowley who claims after his trial had ended, Ronald Light confessed to him that he did indeed shoot Bella Wright but it was an unfortunate accident when his gun went off while he was showing it to her.  An intriguing statement which could turn the case on its head but, can it be relied upon as true?

A classic unsolved case which has all the elements to keep any true crime enthusiast asking all the questions.  Included in the book are complete timelines of events, minutes of the trial of Ronald Light and an overview of the books and their conclusions which have been written on this intriguing case.

You can purchase a copy of The Green Bicycle Mystery by Antony M. Brown direct from the publisher Mirror Books.

In 1919, young Bella Wright was found dead on an isolated lane in Leicestershire, seemingly from a fall from her bicycle. On closer inspection, however, it becomes clear that this 21-year-old had been shot in the head and what began as an accident investigation became a murder inquiry. In The Green Bicycle Mystery, historical true crime author Antony M. Brown brings this case back to life by examining all the evidence and looking deeper at the prime suspect, Ronald Light, and his distinctive green bicycle. A fascinating classic case which remains unsolved to this day. A great read for those who love a true crime mystery.