by Fiona Guy
in Book Reviews
Reading Time: 9 mins read
A A 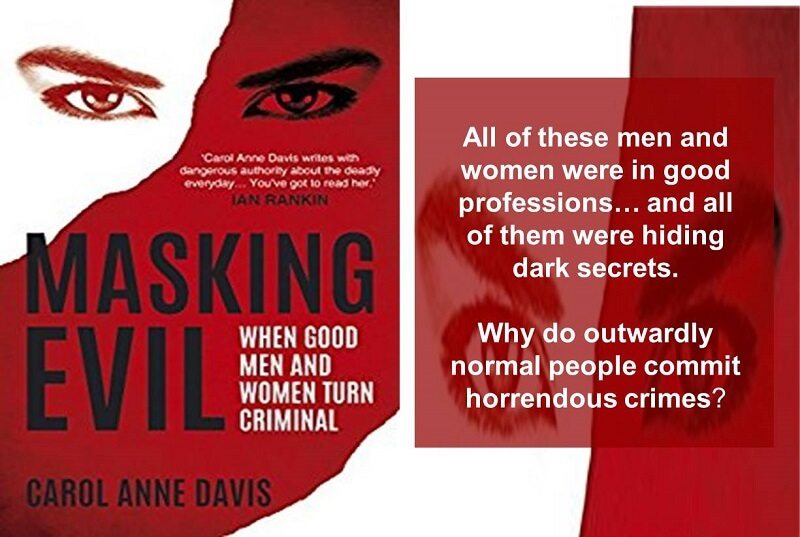 Share on FacebookShare on TwitterShare
“Why do outwardly normal people commit horrendous crimes? In this collection of incisive profiles, veteran crime writer Carol Anne Davis turns the spotlight on men and women from respectable backgrounds who crossed the line into depravity. Whether a model pupil, a trusted member of the clergy or the chief of police, these otherwise ordinary people revealed their hidden capacity for the darkest crimes.”

Killers are not always spotted in a crowd.  They don’t stand out and often entirely blend in.  An assumption that all those who go on to commit heinous crimes had clear warning signs and something obviously ‘wrong’ in their personalities is naive. Many of these individuals and such “otherwise ordinary people” can become the most frightening of criminals.

What’s more, carving out a successful career, achieving qualifications and gaining respect from peers due to an upstanding profession does not mean these individuals cannot commit some horrific crimes against others.  These are the criminals who cause more surprise and more shock when they do as it is taken for granted that those in such respected positions would never do such things.

For some, these professions are an attempt to curb inner feelings and turmoil and channel their energies into something worthwhile, honorable and valuable. For others, these professional roles, which automatically provide a shield, are being used solely to access their prey and provide them with the means to abuse their victims and give them the perfect cover.

“Some of the professionals featured here fit into the intelligent-but-hugely-damaged-in-childhood category.  Though they became everything from a church organiser to an Ivy League lawyer, they were at heart angry and neglected children with numerous unmet needs.” – Carol Anne Davis

In Masking Evil: When Good Men and Women Turn Criminal by Carol Anne Davis we see the truth behind these screens and the nature of the brutality hidden within these socially accepted roles. Bishops, charity workers, doctors and police officers are all featured in Masking Evil, highlighting just how easily individuals from respectable backgrounds can turn bad.

Successfully demonstrated in this book are the core emotions that can drive people to kill despite their intellect, education, and success in personal and professional lives.  The often primary causes of extreme violence leading to murder; fear, jealousy, greed, and rage can and do affect all of us.  No one is immune but for some, these emotions are so intense they drive behavior which is not only illegal but morally and socially abhorrent.

The chapters in Masking Evil are a pleasing length with each focused on an individual case which is well organized and structured for ease of reading.  Information on the cases covered is not unnecessarily repeated and facts are not speculated on.  A skill of Carol Anne Davis evident across her books is her ability to present these harrowing cases in a factual and concise manner while still providing all the information required for the reader to gain a real picture of what took place and, where possible, why it took place.

This is not simply a collection of readily available information on some well-publicized cases. Carol Anne Davis has focused on key aspects in the background, family history, and personality of each killer. Areas that are significant in the resulting behavior of the individual in question. It is a selection of cases which highlight with clarity how good people can go bad and as a result, it is a riveting and fascinating read.

This book spans not only a collection of ordinary individuals who turned into criminals but highlights the range and complexity of issues that can motivate such behavior.  The mental illness of Stephen Griffiths; the criminology PhD student who wanted serial killer status.  Stephen Griffiths targeted sex workers, determined to kill two or more to achieve his aim. His third attack was caught on CCTV with his terrified victim, Suzanne Blamires, being shot at with a cross-bow and a defiant Griffiths staring up at the camera seemingly unfazed by his actions being caught on film. A man who happily announced himself as “The Crossbow Cannibal” at his court hearing, he enjoyed describing his kills and his cannibalism to police officers.

The entire lack of empathy and remorse shown by Brian Blackwell through his extreme narcissistic personality disorder. An 18-year-old boy who had ideas of grandeur which his elderly parents just did not fit into.  Brian Blackwell was a very bright boy with no doubt controlling parents who rarely approved of his chosen friends. He retreated into a fantasy world where he was successful, a professional tennis player who enjoyed all the wealth that came with it. When challenged on his outstanding credit and outlandish spending, Blackwell exploded in rage attacking both his parents with a claw hammer before stabbing them to death. He then locked up the house and went on holiday with his girlfriend who knew nothing of his horrendous acts.

Brian Blackwell withstood countless interviews with police officers upon his return maintaining his innocence before he finally confessed to a psychiatrist. A psychiatrist who diagnosed him with narcissistic personality disorder at the most extreme end of the scale, a diagnosis which would be used as a defense for the first time in a British courtroom.

Children who kill their parents, termed ‘parricide’, are often individuals who see these two people as barriers preventing them from having the freedom and autonomy they want and feel they deserve.  The shocking case of Jennifer Pan in Canada in 2010 is one such example, a case study expertly explored by Jeremy Grimaldi in his book A Daughters Deadly Deception.

Carol Anne Davis has also explored children who kill in her previous work, most notably her book Children Who Kill which tells of the most shocking and brutal murders carried out by juveniles.

What Masking Evil also reveals is that the level of violence and personal involvement can vary dramatically within these crimes.  The rage and overkill exhibited by Brian Blackwell against his elderly parents, next to the passive indifference shown by Erin Caffey while she calmly sat outside listening to her boyfriend shoot her entire family at her own request.  The Erin Caffey case is a truly shocking example of juvenile crime and how the power of young love and adolescent emotion can drive individuals into deepest depravity.

16-year-old Erin Caffey began seeing 18-year-old Charlie Wilkinson, a boy her parents disapproved of.  In order to ensure her freedom to continue seeing her boyfriend, Caffey chose to get rid of her entire family and ask her boyfriend to do it.  In March 2008, Wilkinson and his friend 20-year-old Charles Ward entered her family’s home and shot her parents and two younger brothers before stabbing them.

Erin Caffey and Ward’s girlfriend 18-year-old Bobbi Johnson remained outside the house in the car, waiting for the boys to finish the job.  Her father survived the attack and was able to name Charlie Wilkinson as the attacker prompting the full story to come tumbling out.  Erin Caffey pleaded guilty to murder in 2009 and received two life sentences plus a further 25 years in prison.  Her father, who wholeheartedly believes his daughter was bullied into the crime and not part of the planning, visits her regularly in prison.

Masking Evil is another expertly presented book by seasoned true crime author Carol Anne Davis which strips back the sensationalism, the media reporting and the speculation on these crimes and reveals the true nature of the individuals behind them.

Additional insight is provided through an interview with true crime author R. Barri Flowers who is able to provide his thoughts on the homicidal children he has studied. Carol Anne Davis’s own research is supported throughout Masking Evil with interviews with leading psychologists and criminologists ensuring a full picture of these crimes and the people who carry them out is presented.

Each case provides a look into how ordinary everyday people can turn on even their closest friends and family when emotion and darkness gets the better of them.  An excellent addition to her published works and a book for anyone interested in gaining an understanding of just how these crimes can happen.

You can purchase a copy of Masking Evil: When Good Men And Women Turn Criminal by Carol Anne Davis at Amazon.

For many, killers are individuals who have clear personality faults and behavioral traits that can be spotted, picked up on and identified. The reality, however, is that those who kill can be anybody, from any background and in any profession. In Masking Evil Carol Anne Davis profiles 37 such killers. They are all individuals who held respectable positions from within the church, law enforcement and medicine to model pupils and PhD students. An excellent collection of case studies highlighting how even those considered to be educated professionals can turn criminal and sink into dark crimes against others. In her traditional style, the writing is light and informational providing a book that is easy to read but packed with insights and understandings of these crimes from her own research and interviews with psychologists and criminologists. A satisfying and enlightening read for those curious on just how good people can go bad.