Did attractive young Gay Gibson die of natural causes in an unfortunate incident in 1947 or was she murdered by the dashing James Camb? 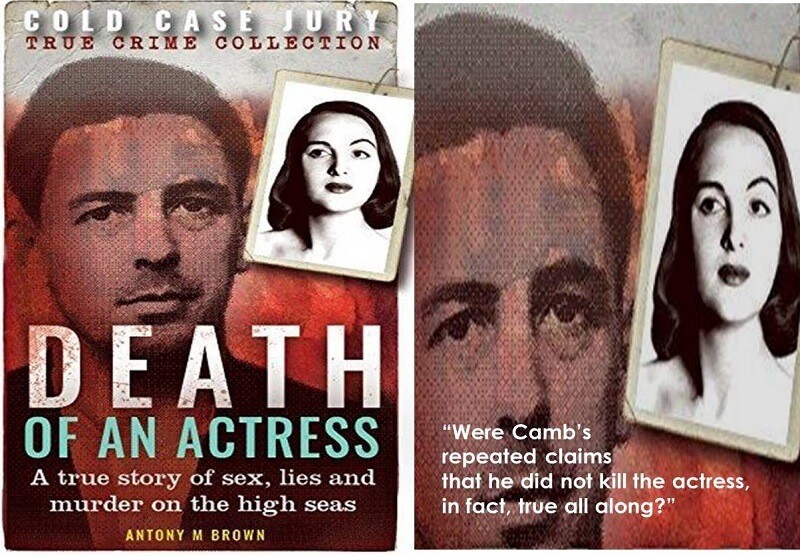 Share on FacebookShare on TwitterShare
“Did the jury convict Camb on the charge of murder solely because he had confessed to destroying the evidence? However callous and depraved it may be, throwing a dead body overboard is not the same as killing someone…”

In 1947 on board the ocean liner Durban Castle, actress Eileen (Gay) Gibson vanished. En route from South Africa to Southampton, a search of the ship yielded no sign of the young woman leaving only one conclusion; Gay Gibson had gone overboard into the crashing seas below. An investigation was launched and soon this case became more than a simple unfortunate accident. Deckhand James Camb admitted he had been inside Gay Gibson’s cabin the night she disappeared and was the last person to see her alive.

In Death of an Actress author Antony M. Brown invites you to sit on the Cold Case Jury, read all the evidence and be taken through the different versions of events in order to come to your own conclusion and your own verdict.

In a unique and exciting venture, Cold Case Jury presents true crime cases from history in a fast-paced, engaging exchange bringing these cases out of the dark and onto our modern e-readers. Each case is explored by highlighting the strengths and weaknesses of each working theory on what happened and then you the reader make your decision.  It is a thought-provoking process giving an extra depth to a true crime book.

In Death of an Actress, we have a confession from James Camb that he was indeed inside Gay Gibson’s cabin that night and was present at the time of her death. Furthermore, after a great deal of police questioning, he admitted that in a panic he lifted up her lifeless body and pushed her through the narrow porthole allowing her body to drop unceremoniously down the side of the ship and into the Atlantic ocean below.

He does, however, strenuously deny murder, claiming that Gay Gibson lost her life in the throes of passion where she simply died in his arms with no warning. His decision not to call for help or alert anyone of the situation, he claimed, was due to panic. He knew he was not supposed to be inside her cabin let alone in a sexual liaison with a first class passenger. His job and his relaxed enjoyable lifestyle would be at risk. Where Antony M. Brown’s true crime books differ from the norm is their focus and reconstruction of the plausible versions of events which may have taken place in each grisly crime. The reader is transported back to the scene of the crime in a narrative which reads like a gripping crime fiction novel.

James Camb was a dashing young deckhand, taking full advantage of his post in first-class who despite being married regularly enjoyed liaisons with the lone female passengers.  A confident if not narcissistic personality whose behavior was well-known amongst his colleagues.  Behaviour, which while questionable, does not make this young man a murderer.

Gay Gibson was a young attractive woman who dreamed of the big stage.  With acting parts in shows in South Africa, she was a girl remembered for her emotional behavior and in many reports her obsessive attachment to men.  In the weeks before that fateful voyage, rumors were rife that she was pregnant after another short but intense relationship.

Her decision to travel home to the UK using a ‘gift’ of $500 from a possible lover, all raised suspicions.  As did her state of health, with talk of ear infections and strange stays in hospital with no firm explanations.  A background which may, depending on which version of events is to be believed, have contributed to her death.

“The inordinate mass of tangled possibilities and unknowns makes it virtually impossible to disprove any claims about cause of death.” – Antony M. Brown

Antony M. Brown has undertaken extensive research on this case looking at case archives, newspaper articles and the books which have been written over the years, all trying to unravel the same mystery. James Camb went on trial for murder in March 1948.

The prosecution claimed he went to Gibson’s cabin that night looking for intimacy and when his advances were spurned he became violent and enraged and murdered unsuspecting Gay Gibson.

The defense claimed he was in Gibson’s cabin by mutual agreement and her death came unexpectedly during intimacy and not at the hands of this young deckhand.  James Camb was found guilty of murder and sentenced to death. A sentence that, by a stroke of luck, was commuted to life imprisonment when the House of Commons voted to suspend the death penalty for five years.  The question remains, however; was James Camb’s conviction for murder the correct verdict?

Death of an Actress is part of the Cold Case Jury series of historical true crime books by Antony M. Brown, published by Mirror Books.

How do you determine a cause of death and whether foul play was involved with no body to examine? In the case of Gay Gibson this was exactly the problem, however, based on circumstantial evidence alone James Camb was convicted of her murder. In a historical true crime case, actress Gay Gibson was traveling back to the UK from South Africa on the ocean liner Durban Castle when she mysteriously disappeared. A confession from deckhand James Camb that she was indeed dead after dying suddenly in his arms in her cabin the previous evening also included the chilling details of how, in a panic, he pushed her body through the porthole and out into the sea. In Death of an Actress, author Antony M. Brown examines this case, the evidence available and the key witness statements and hands the case over to readers directly; did Gay Gibson die of natural causes as Camb claimed or did he commit murder? A fascinating read on an intriguing case which will have you asking questions all the way through. If you like true crime and enjoy solving mysteries, this is the book for you.