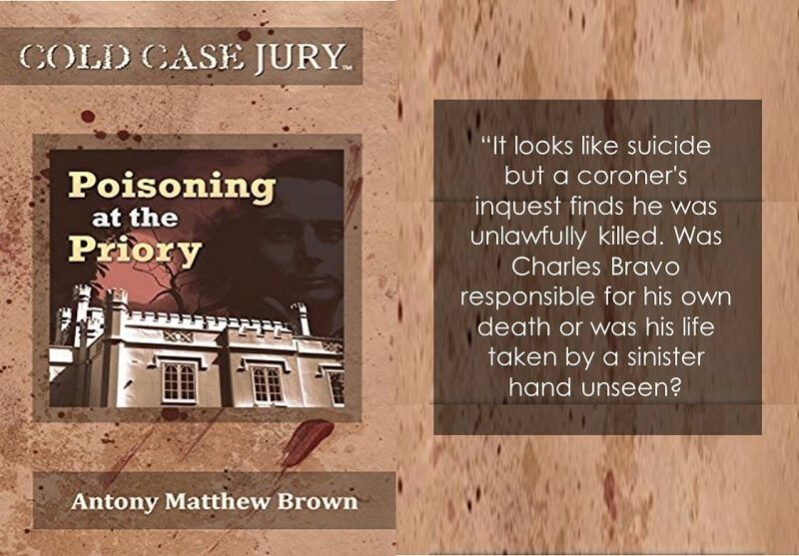 Share on FacebookShare on TwitterShare
“When a dying barrister is told by his doctors he has ingested a rare poison he seems strangely indifferent to his plight. It looks like suicide but a coroner’s inquest finds he was unlawfully killed. Over a century later debate still rages: was Charles Bravo responsible for his own death or was his life taken by a sinister hand unseen?”

In a classic who-done-it, the prolonged and painful death of Charles Bravo from antimony poisoning in 1876 has baffled true crime buffs for over a century.  This is a famous poisoning case surrounded in mystery; was it suicide, misadventure or murder?

Author Antony M. Brown reignites this intriguing case in his book Poisoning At The Priory, in his ongoing Cold Case Jury series.  Here the evidence is presented and the different scenarios which could have transpired that day resulting in Bravo’s death are dramatically reconstructed, giving you the reader the challenge of determining what really happened and who was responsible.

Described in the British Medical Journal as a case which “began in mystery and ended in mystery”, over 100 years after Charles Bravo’s death there is still no clear conclusion.

Balham Priory sits within south London and is an imposing building overlooking the city. On 18 April 1876 events unfolded which led to the agonizing death of Charles Bravo, a lawyer with a sharp tongue and a determined nature. On this day, Bravo had taken one of his horses out for a ride around his land.

He managed to stay mounted on his horse throughout this ordeal but on return to the stables was in terrible pain from his abdomen. A ride which became frightening when the horse bolted, leaving a startled Charles Bravo clinging on for his life across a distance of four miles.

Was it simply a coincidence that on that same evening, Charles Bravo began to suffer the deadly effects of poisoning? The first potential suspect, in this case, is Bravo’s wife Florence. Born into a wealthy family, Florence married Captain Alexander Ricardo at the age of 19, an extremely wealthy man in his own right.  Despite their separation seven years later, upon his early death from alcohol poisoning, he had not altered the details of his will and Florence inherited his entire estate.

Four years later Florence married Charles Bravo. Their marriage was a rocky one with Florence seemingly turning to alcohol, suffering numerous miscarriages and the couple sleeping in separate rooms.  An illicit affair with a Dr. Gully also lurked in the background overshadowing the relationship, a fact which may well have played a part in the death of Charles Bravo.  On the night of the poisoning, the couple had been married for less than four months.

Florence had a faithful companion, Mrs. Jane Cox who had remained by her side for previous years providing her with support and attending to her every need.  Mrs. Cox was also in the house on that fateful night and it was her who not only came to the aid of Charles Bravo in the first instance but was to later claim he uttered a statement of suicide into her ear.

Antony M. Brown very successfully re-enacts the events of this case in accordance with each theory as to what may have happened leading to the same mysterious outcome. He has a great writing style keeping you engaged in these narratives and eager to discover more. Whether you are familiar with this historical case or not, this book provides an exciting new approach drawing you in and enabling you to become involved in the drama which unfolds.

Throughout this book, the author reviews the evidence and highlights the key facts which are pivotal to the case and will need to be taken into account when reaching a verdict on who was responsible for this man’s death. An evidence file contains a detailed timeline of events, details of the poison which killed Charles Bravo and a review of the reports in the medical journals of the time such as The Lancet in relation to this case.  The statement given by Florence Bravo and the account of events provided by Mrs. Jane Cox is also included.

In Poisoning at the Priory, you are being invited to reach a verdict on how Charles Bravo most likely died.  You as a reader are guided through this case, paused at relevant points to review the evidence and consider motivations, opportunities and potential scenarios.

“In this case there are more conjectures than facts and more questions than answers, but this should not deter you from reaching one of the four possible verdicts.” – Antony M. Brown

It is a book which invokes independent thought and provides the means for full consideration of the facts available in order to reach a conclusion. A very different approach to the telling of a historical true crime tale but one which is most enjoyable.  If you are looking for a book which allows you to become truly immersed in a mysterious true crime case, this is a read you will not want to miss.

Poisoning at the Priory is part of the Cold Case Jury series of historical true crime books by Antony M. Brown, due to be published soon by Mirror Books.

The poisoning of Charles Bravo, a successful lawyer in London in 1876 is a case many are familiar with. The imposing Belham Priory overlooking the city saw this man die an agonizing death over two days as a result of ingesting the rare poison antimony. Was he murdered or did he commit suicide or, was it a terrible accident? In Poisoning at the Priory, author Antony M. Brown re-investigates this case. The events of that April evening in 1876 are dramatically re-enacted looking at the different theories on what could have happened and who may have been responsible. Did his wife, Florence take the life of her husband? Did her trusted aide, Mrs. Cox, take it upon herself to kill? A refreshing approach to a famous mystery which allows the reader to fully engage with the story.