Domineering and demanding, Mrs. Isabella J. Martin was a woman determined to execute her revenge on those she believed had wronged her. 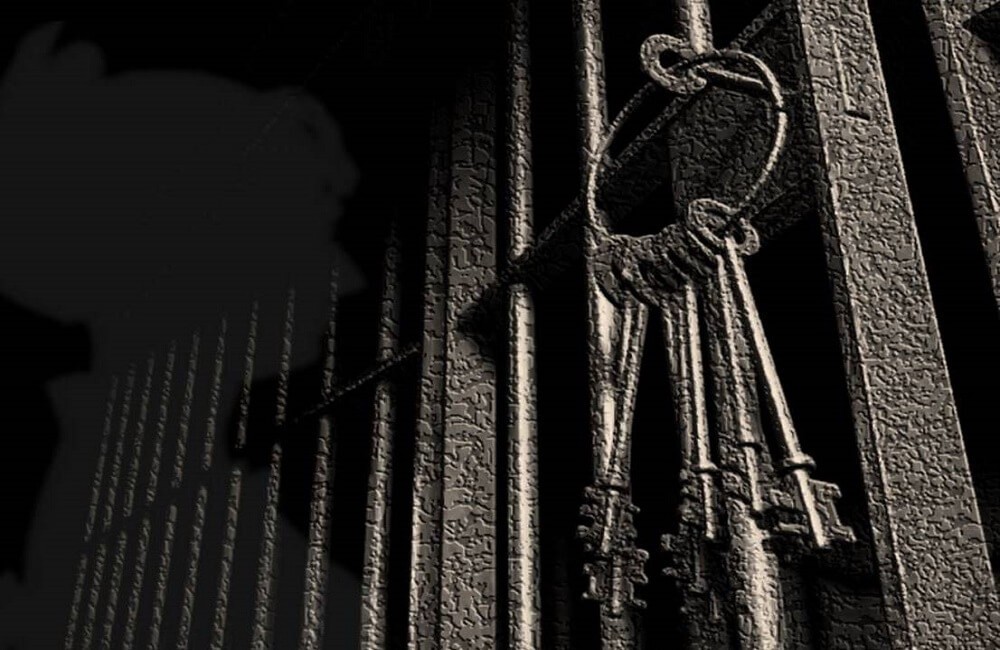 Share on FacebookShare on TwitterShare
Loud and brash with an air of glamour, Isabella Martin’s antics across California’s courtrooms earned her a wild reputation. It was a reputation that continued to darken when her control over her son emerged along with the range of crimes she had forced him to commit in her name. By the turn of the 20th century, Isabella Martin was a name California’s legal system had come to loathe.

If “holding grudges” was an Olympic event, Isabella Martin would have won the gold medal.  For 15 years she was the bane of the Northern California legal fraternity. Just the sight of her in a courtroom was enough to send seasoned attorneys screaming into the night.  But her extra-legal activities were even more frightening.

Born Isabella Bidwell in New York State in 1861,  Isabella, once divorced, moved to Weaverville California, a gold mining town, in 1890 to go husband prospecting.  She struck gold when she married 58-year-old John Martin, a wealthy mine owner.   Isabella went to New York in 1891 and returned with a baby, who she named “Baby John Martin” after his father. But Isabella’s irascible disposition soon alienated the townspeople.

When John Martin died in 1892, Isabella reached out to John’s wealthier brother Henry, claiming that the people of Weaverville were conspiring against her and her two-year-old son. Henry Martin, however, wanted nothing to do with her.  He suspected Isabella of killing his brother John and didn’t believe that John was the father of Isabella’s son.

When Henry died in 1893, Isabella sued his estate on behalf of her son.   According to Isabella, she and Henry had a very close secret relationship, implying that Henry was the father of “Baby John”.   She produced some letters he had written to her along with a second will which she claimed that Henry had written just before he died.  In this will Henry gave his beloved nephew, “Baby John” Martin, one third of his estate. The sensational three-month battle over Henry’s estate became the Bay Area’s hottest ticket.  “Baby John” was a constant presence in the courtroom and he was doted over by both sides. Isabella added a note of glamour by wearing a fashionable new dress each day of the trial.

Isabella loved the spotlight and would make outlandish statements to the press, even statements that went against her own interests.  She told a reporter that she had fired Crittenden Thornton, one of her attorneys, for “writing her letters of too friendly a nature.”  This was news to attorney Thornton, who emphatically denied the allegations and resigned from the case. During another tantrum, Isabella threw a civil code law book at a lawyers head.  As a result of Isabella’s behavior, a policeman was stationed in front of Judge Coffey’s desk “to prevent Mrs. John from biting Attorney Delmas or otherwise inflicting great bodily injury upon the person of that gentleman.”

Arthur Rodgers, the opposing attorney, shredded Isabella’s reputation.  He showed extortion letters that Isabella had written to wealthy Andrew Crawford claiming that Crawford was the father of her child.  Witnesses testified that Henry Martin was too sick to have written the will, and handwriting experts testified that her letters and Henry’s second will were forgeries.  Rodgers even cast doubt on Isabella’s maternal claim by showing that she was betting at the racetrack just the day before she allegedly gave birth.

With virtually no evidence on Isabella’s side, her attorney fell back on his oratory skills.  He told the jury in essence, “We’ve implied that Henry was Baby John’s father but if he isn’t it doesn’t really matter.   Just look at this cute little kid! We’re not asking for Henry’s entire fortune, just one-third of it.  His widow will still be rich.”  Referring to the biblical story of Saul and the witch of Endor he said:

“Had I had the power of the witch of Endor I would summon him here.  I can almost hear the air rustle with her presence. Give baby John his fortune. Give him the fortune I would have given him and right the wrong I have given him.”

Unsurprisingly the jury ruled against Isabella.   Isabella lost the case but she gained a new enemy, attorney Rodgers, and immediately set about to make his life miserable.  She wrote Roger’s fiancé in which she said, “I shall watch the career of yourself and husband with great interest and fervor, for Arthur Rodgers can never, while life lasts, undertake or attempt anything that will not be closely followed by myself.”  In 1898 she filed two $500,000 lawsuits against Rogers for defamation of character on behalf of herself and “Baby” John.

Isabella was in court almost continually over the next twelve years. She was arrested for threatening an actor’s life and for trying to evict her tenants with an ax.  She was sued for non-payment by numerous hotels, grocers, lumber dealers and the Bay District Race Track. She also initiated many lawsuits, often acting as her own attorney.

In 1901 two of Isabella’s Oakland cottages burned down, followed by a number of suspicious fires in the area. The Westchester Fire Insurance Company refused her claim on the grounds that the fire was arson.  Isabella sued and the case was assigned to Judge Ogden.  The case went on for years and was dismissed in 1905.  Dissatisfied, Isabella went east and threatened the life of the president of the insurance company.  In 1907 Judge Ogden’s home was partially destroyed by a mysterious dynamite blast.

The next year the mystery was solved.  Sixteen-year-old “Baby John” was arrested in Weaverville for setting fire to a barn.  While in jail, John made a horrifying confession to his jailor.  Under his mother’s orders, he had burned her cottages for the insurance and bombed Judge Ogden’s house.  In addition, he and his mother had constructed bombs to blow up the houses of the head of the Contra Costa water company, and a police judge.  They had dynamited an irrigation ditch, burned a barn, poisoned a sugar barrel in a grocery store, and attempted to kill the inhabitants of Weaverville boy poisoning their water supply.  Fortunately, the current went the other way and only some animals were poisoned. 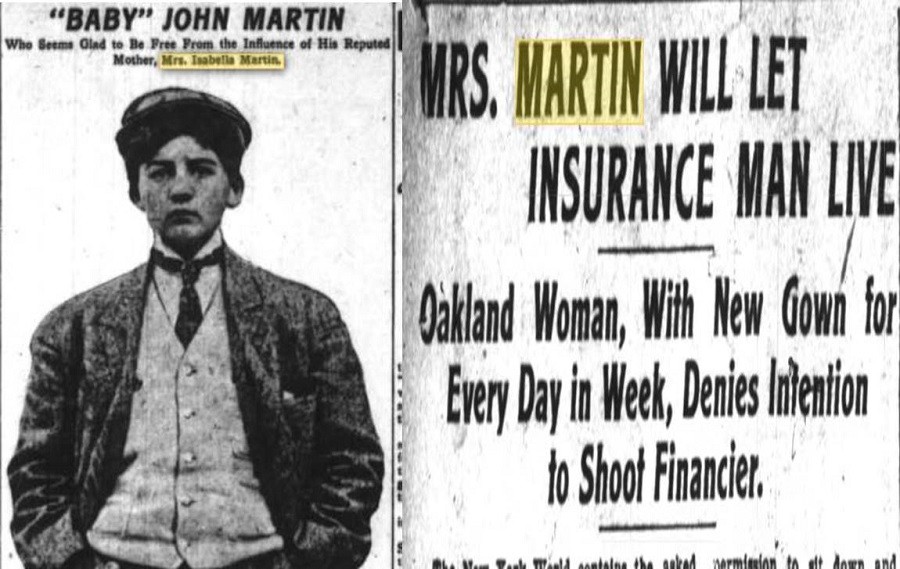 For six years, “Baby John”, under constant beatings and death threats from his mother, had become the instrument for settling her many grudges.  He showed authorities numerous caches of explosives that he and his mother had hidden.

Isabella was arrested and put on trial for the bombing of Judge Ogden’s house. She admitted that her son was adopted. Isabella then showed her true maternal feelings by blaming everything on her son and called him a “degenerate.”  “John has never had anything but good advice from me,” she claimed.  “He has been insane from his early youth”, she added. Isabella blamed all the crimes on her son’s heredity.

Isabella conducted her defense with her usual fury while her court-appointed lawyers competed to see who could sit furthest away from their client.  Almost all the witnesses she called for the defense ended up testifying against her. Despite days of fierce cross-examination, John’s story remained intact. Other witnesses testified to Isabella’s mistreatment of John, including breaking his nose. It took the jury only six minutes to declare her guilty and she was sentenced to life imprisonment.

Even in prison, Isabella maintained her reputation as a fashionista. “Mrs. Isabella J. Martin is very anxious to have a good picture of herself put in the rogues’ gallery. She made the photographer pose her three times after she had made a very careful toilet. When he showed her a proof of the picture she was very well satisfied”, reported the San Francisco Call.

During her appeal in 1910, she explained to the judge that her wearing of men’s trousers while at her home in Weaverville was in keeping with the prevailing fashion.

“I am surprised at your ignorance.  Don’t you know that in Europe and in other centers of fashion women wear what is known as touring trousers? I was not wearing men’s clothing or attempting to disguise myself. I was only wearing the latest fashion. Why, John Pierpont Morgan’s daughter wears them.”

Isabella managed to get a new trial, but the verdict was the same. In this trial, she added more histrionics by attempting suicide in court.  After saying “I will not go back to jail. I will die right here,” she slit her wrists with broken glass.

Freed of his mother’s domination, John returned to Weaverville and emerged as a popular honor student.  The nickname “Baby” John followed him into adulthood.  Upon graduation, he became a miner and managed what was left of his mother’s properties.

Isabella’s time in prison did nothing to soften her temper.   She threw hot soup on one matron and kicked another into unconsciousness.  She filed constant appeals to the courts.  In 1914 she was committed to Napa State mental hospital where she died in 1929.