in True Crime & Justice
Share on FacebookShare on TwitterShare

With procedural dramas like Law and Order and CSI glamorizing police work, many people feel drawn to the lives of those individuals who dedicate themselves to solving crimes. For those with an artistic leaning, forensic photography represents the melding of two attractions: image-making and morbid curiosity.

While forensic photography sounds like a romantic profession and a crucial element of police work, most people don’t realize what really goes on behind the yellow tape.

What Is Forensic Photography?

The real merit of a forensic photographer’s work lies in the neutrality of the photos. Creating a visual narrative of the crime scene provides nothing useful for investigators.

The photos must not contain any artistic or interpretative elements so they can be used in an unbiased manner to determine what occurred.

Crime scene photographers must always consider these three crime scene elements: the subject, the scale, and a reference object. This way, investigators and eventually a jury, have a clear picture of what happened at the scene of the crime.

Edmond Locard, known as the “Sherlock Holmes of France,” theorized that the perpetrator of a crime will always bring something to the crime scene and always take something with them.

This commonly referenced principle among forensic experts demonstrates the importance of forensic science, and why photographers must be meticulous when documenting all pertinent evidence.

Born in 1853, Bertillon also standardized early methods of crime scene documentation that became popular in the early 20th century. Using a high tripod that held the camera facing down, Bertillon took a bird’s eye view images of crime scenes. His intricate set-up produced some of the most haunting and bizarre images in the history of forensic photography.

His contemporaries viewed Bertillon as something of an eccentric, and certainly, despite his contributions to the field of criminology, he was no saint. In 1894, the criminologist testified against Albert Dreyfus in the infamous political scandal known as the Dreyfus Affair. Bertillon pretended to be a handwriting expert to frame an innocent man.

Today, curious spectators can see some of Bertillon’s crime scene images in art museums, where curators house them as art objects. His distinctive method of capturing a crime scene on film is still unsettling to this day.

English forensic photographer Nick Marsh served with the London Metropolitan Police Department for more than 20 years. He has stated that his job permeates all parts of his life. When he goes to a restaurant with his wife, for instance, he can’t help but pick up his knife and examine it for fingerprints.

He calls what he does “proactive photography.” It’s focused on enhancing images or small details that may prove helpful in solving a crime. He considers a large part of what he does art, as well as science. Going to work, he never knows what the day will bring. In a morbid way, the job is attractive to him due to its unpredictable nature.

For Marsh, forensic photography equates to efficiency; he wants to make a case with as few photographs as possible. Often, this doesn’t require a fancy camera, just a proper light to illuminate the critical sections of the crime scene.

Lighting can become very technical. For example, at sexual assault crime scenes, forensic photographers must remain aware of body fluids’ sensitivity to light at wavelengths of 440 to 460 nanometers. Crime photographers identify and document the fluids using a special lamp, ultraviolet light, or a green laser. 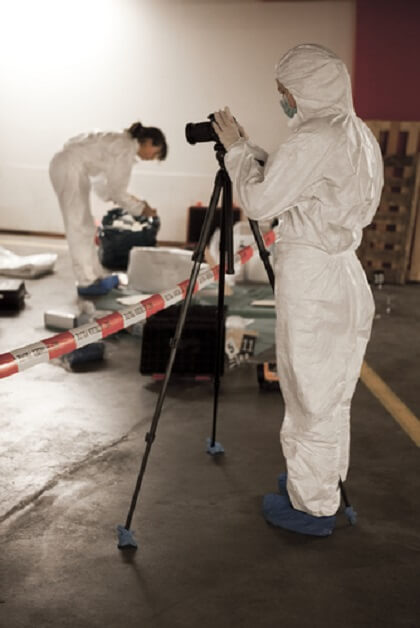 Marsh recounts the story of a string of murders in the St. Pancras area of North London he helped solve some years earlier. When the police arrested the suspect, they found a dismembered torso in his bedroom. Despite this grisly discovery, they needed further evidence to link him to the other murders.

As the police combed the suspect’s apartment for blood and other evidence, the forensic team came upon something curious: a name written on the wall. They couldn’t quite make it out with the ultraviolet light, but switching to an infrared camera, they made an extraordinary discovery.

The suspect had written the names of his previous victims on the walls and then painted over them before the police arrived.

Marsh worries that forensic photographers are becoming a dying breed, as police departments hire fewer of them every year. He blames the present-day ubiquity of cameras; in the digital age, everyone carries a smartphone in their pocket. And contrary to what some contemporary art exhibits might postulate, Marsh doesn’t think owning a camera makes you a photographer.

An untrained photographer can spoil a court case if he or she presents a distorted image to the jury. When the guilt or innocence of the suspect hinges on unbiased testimony and evidence, shoddy photography can easily sway an opinion. An untrained eye may not notice critical evidence.

Though some might balk at the prospect of endless crime scenes and close-ups of the grisly details, it’s just part of the job for a forensic photographer. They are critical to any criminal investigation and the justice it brings to the victim. “There is a sense of satisfaction,” Marsh explains, “in knowing that the amount of effort you’ve put in has a reward at the other end.”

Despite their depiction on the television screen, the work of a forensic photographer is hardly glamorous. On any given day, they may be photographing car upholstery or taking close-up shots of dollar bills, yet the work they do is vital to police investigations.

A good forensic photographer is meticulous, neutral and technically trained, with knowledge of different forms of light and various camera techniques to extract the most information from a crime scene.

Despite the realities of the profession, capturing images of unthinkable acts still gives true-crime readers a thrill as they imagine themselves as part of the action when they read another riveting account of depravity.

About the Author: An article by Harry Parsons from Arcadia Publishing, the largest and most comprehensive publishers of local and regional books in the United States. Explore the history of crime in America with fascinating accounts of prison life and the stories behind some of the nation’s most notorious criminals.