A book giving a lesson in history at the same time as providing thought-provoking and intriguing narrative on some of the most famous criminals in British true crime. 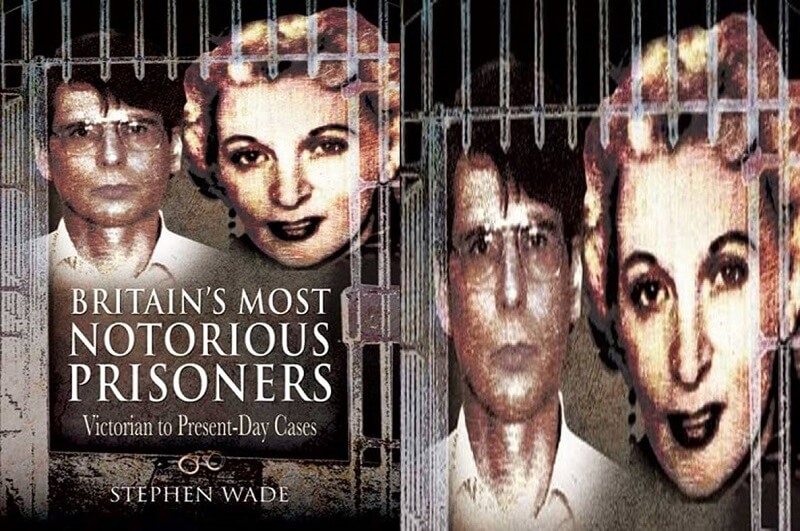 “Prison is an unknown world for most of us. It is a place where time stops and lives are held in suspension, taken out of circulation. Amongst the gaol population are the dangerous inmates: killers and rapists, gang ‘hit-men’ and serial offenders.”

There are around 150 prisons in Britain today. Prisons that have seen famous criminals pass through their gates from the pettiest to the most extreme. The notoriety of a prisoner can come from their crimes, their personality, and behavior or it can be their portrayal in the media. Charles Bronson has seen 160 prison stretches since 1974 and is famed for his antics and his writings. Oscar Wilde was imprisoned in 1895 with the poems stemming from his time behind bars giving the world great insight into prisons in the Victorian era.

In Britain’s Most Notorious Prisoners, writer Stephen Wade explores some of these cases. He takes us behind the scenes of their criminal histories and puts us in prison with them. From the Victorian gallows of the early 1900s to our modern-day prison cells, we learn what does make priswhooners notorious and just how much Britain’s prison system has changed as the years have gone by.

In a surprising but very welcome start to a book, which was expected to jump straight into true crime tales of the past, is a thought-provoking and meaningful discussion on experiencing prison and what it means to be incarcerated.

Britain’s Most Notorious Prisoners is more than just a collection of fascinating cases. It is a lesson in the history of the British prison system. In how legal procedures have changed and how prisons and conditions have developed through the years. When we do delve into those case studies, we start with the late Victorian era. A period so drastically different from our modern-day conveniences, we see the difference in penal experience and get a feel for what it must have been like to be put in jail and await your execution in those days.

Stephen Wade is a seasoned author and writer with first-hand experience of prisons. Not through being jailed personally, but by working in prisons and with prisoners for many years. This is a man who has clearly met and got to know a range of prisoners, from those who have committed petty crimes to some of the most dangerous. He has seen the men behind the headlines and understands that while crime, and particularly serious crime, cannot be put to one side; these are individuals and people just like you and me.

They are not necessarily the monsters portrayed in the press. Furthermore, regardless of how sensational your crimes are, in prison, you are simply another prisoner with the same mundane routines as everybody else. That is not to say some of these individuals do not pose an extreme danger and should not be let out to roam in society but, they are still human beings.

“I have met and worked with murderers of all kinds, from the men and women who kill from within the routine framework of their normal lives, and kill with intention…”.

The writings of Stephen Wade extend across many books. ’Notorious Murders of the Twentieth Century’, ‘Notorious Prisons of the World’ and ‘DNA Crime Investigations’  are just a few of his titles which sound just as intriguing and appealing. An author who has easily built a following due to the quality of his work.

Just what is ‘notorious’? A question asked and discussed early in Britain’s Most Notorious Prisoners alongside the complex question of the existence of evil. Both are terms that have a large foundation within the media and the portrayal and sensationalist writing that often surrounds particularly nasty and violent criminals.

Right before the casebook of British notorious prisoners is opened, a timeline of prison history is given. The first recommendation that hanging should take place in private and behind prison walls in 1856; the 1983 Charles Bronson rooftop protest at Broadmoor.

A fascinating rundown of some key events in the history of British prisons, placing the criminal tales to follow inside their slots in history and within the era in which they occurred. Cases have been carefully chosen from the many available and Stephen Wade has chosen well. Some are simply just too interesting not to include. Others have the flair of the bizarre. Florence Maybrick and her conviction for the murder of her husband using arsenic. A crime that she most likely didn’t commit, if indeed a crime occurred at all.

Oscar Wide, the famed writer, and poet who is more popular now than he was when he was alive. A man who experienced a number of prisons during two years of imprisonment starting in 1895 including Pentonville, Wandsworth, and Reading. His experiences have told us much about prison life in the late 1890’s, information that would be hard to come by elsewhere and they have inspired some of our most treasured writings.

While many books have been written featuring criminals and some of the very ones covered here, most focus on their crimes and the grisly details. This book is different. While their crimes and the reasons for becoming prisoners are adequately covered, the focus is on the fact they are prisoners. The prisons, the conditions, their experiences, and the bigger issues surrounding incarceration and the death penalty, if applicable, at that time.

While you are engaged in the details of a case, the narrative does at times jump forward in time and then back again to continue the story. This can cause the occasional re-reading of paragraphs to clarify the timeline, however, this affects readability only slightly.

“Prison….is a place where time stops and lives are held in suspension, taken out of circulation.”

While reading it becomes clear that the word ‘notorious‘ when applied to crime and criminals conjurors up a rather glamorous image of the film star criminal, most probably pushed forward from media reporting.

Evading the law, getting away with their criminal deeds, or committing acts so horrific they are elevated into the history books. The case of Harry Roberts for example, a man who shot and killed three policemen in 1966 in London, known as the Shepherd’s Bush murders. His notoriety is within society to the point a football chant was created about him, sung at football grounds, and pushing his crimes and his mugshot into national recognition.

Dennis Stafford, a lifelong criminal and notorious gangster, whose crimes and lifestyle inspired the 1971 classic film ‘Get Carter’, starring Michael Caine.  An individual whose life has become a complex web of murder, legal trials, a movement for wrongful conviction, inquiries, and police hearings.

Charles Bronson is covered in Chapter 19, aptly entitled ‘Prison Superstar’. This is a man who holds the title of the most ‘notorious’ prisoner in British history. Bronson is a huge public image with personal writings published one after the other from behind bars. With only four years since 1974 being spent within the general population inside the jail, Charles Bronson has spent the rest of this time in solitary confinement.

“In March 2009, he undoubtedly achieved the status of what is called now a ‘legend’. This is because a feature film was made about him, with Tom Hardy in the title role. This was simply Bronson, and the man himself told the press “I never dreamed I would ever have a movie made of my life. I have never glamorised crime or violence. All I ever do is expose the system for what it is.”

There are many personal touches embedded in these chapters from author Stephen Wade. Sections that share personal communications, whether verbal or written, regarding these prisoners. The added insight and further information they provide about prisoners characters and their circumstances add value to this book. They are details that bring originality.

What this book doesn’t do is present chapters on known criminals giving the standard summary of their crimes, their arrests and their prison time, and I am glad it doesn’t. Such details can easily be found from a simple Google search if you so wish.

In Britain’s Most Notorious Prisoners, you are treated to an insight into individual’s time in prison, their behaviors and interactions and how this fits with the notorious prisoner image. Ruth Ellis, the Krays, Charles Bronson, Peter Sutcliffe, Dennis Nilsen, Ian Brady, and Beverley Allitt are just some of the prisoners you will find detailed and explored. An insightful and thought-provoking piece of writing structured to keep you turning pages; this is a book which does not disappoint.

You can purchase a copy of Britain’s Most Notorious Prisoners by Stephen Wade at Pen & Sword Books.

Britain has seen its criminal justice system and prison system change dramatically since the Victorian era. Author Stephen Wade explores and details some of the country’s most notorious prisoners during this time, from the Krays and Charles Bronson, Oscar Wilde to Ruth Ellis and Beverley Allitt. A fascinating insight into these prisoners, their prison time and just what is it that makes some prisoners ‘notorious’. A book giving a lesson in history at the same time as providing thought-provoking and intriguing narrative on some of the most famous criminals in British true crime.