Home » Book Reviews » The Psychopath Test: A Compelling Adventure Into The World Of Madness

by Guest Author
in Book Reviews
Reading Time: 6 mins read
A A 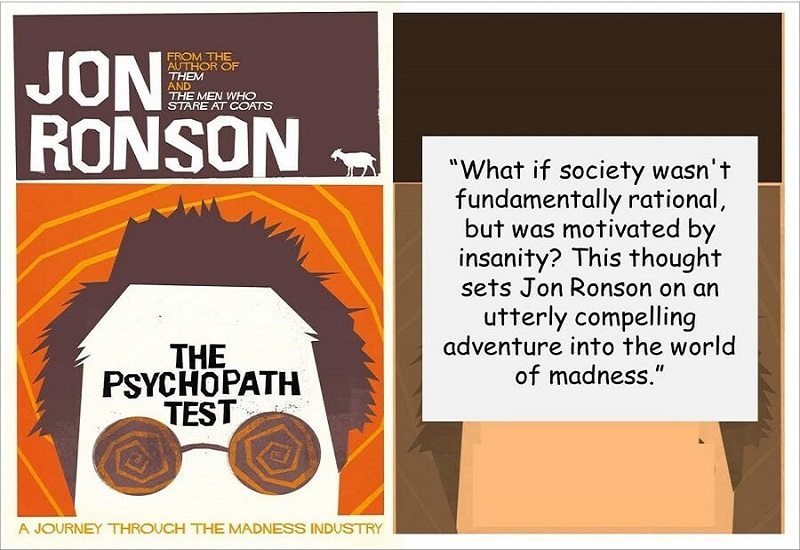 Share on FacebookShare on TwitterShare
“Along the way, Jon meets psychopaths, those whose lives have been touched by madness and those whose job it is to diagnose it, including the influential psychologist who developed the Psychopath Test, from whom Jon learns the art of psychopath-spotting”

They’ve scared away the monsters from under your bed, they’ve frightened that skeleton from within the closet. They have been delivering strange books in secret to academics across the globe, managed death squads and led countries, some sit in Broadmoor hospital or in executive positions – they all have one thing in common…… They are all PSYCHOPATHS!!

From the Welsh valleys, the enigmatic Jon Ronson has authored nine books thus far – all with a passion for the strange dark places lurking on the fringes of our society that few of us are even aware exist.

An author, journalist, documentary and film writer, he has published work for The Guardian newspaper, commercial radio, BBC and Channel 4. Some of his previous books include: ‘Them: Adventures with Extremists’, ‘Out of the ordinary: True tales of everyday craziness’ and ‘What I do: More tales of craziness’, all of them published with him at the centre of the controversial topic.  Jon sums up his book The Psychopath Test by saying:  “this is a story about madness.”

If you were asked to describe the word psychopath, what would come to mind? A serial killer? An evil master mind? Or maybe you would have a picture come into your head that resembles ‘Johnny’ from the cult film “The Shining”?

Jon, very accurately, reveals that although these individuals can be evil, psychopaths are just like you and me! According to page 53, Jon highlights a portion of a book called the Diagnostic Statistical Manual or better known as the DSM-V.

This manual is written and used throughout America and most other countries worldwide to diagnose mental health diseases or disorders.  But not once does it categorise the term ‘Psychopath’ as a diagnosis. This is a word that is abounded about by the media and authors a like and has embedded itself into the psyche of societies minds, into our minds.  The DSM and the World Health Organisation’s equivalent uses the term “Antisocial Personality Disorder” and unless you were a Forensic Psychologist or Psychiatrist, you would not even know if one was your neighbour!

Jon takes us on a roller-coaster ride from University College London to an unknown town in Sweden called Gothenburg to investigate a mysterious book that academics are receiving.  Then he tries to understand the secretive section of the Christian cult of Scientology, better known as CCHR or Citizens’ Commission on Human Rights.  They specialise taking down the medical community in particular psychiatrists (thankfully I’m training in psychology).  They take him to Broadmoor (is he mad, no one gets out!).  Thankfully Jon did.

His next adventure takes him to a conference on how to test people who might have psychopathy led by the Professor Bob Hare.  For years, this famous American professor of clinical and forensic psychology, has tried to get his clinical diagnosis and name into the DSM but to no avail.  On page 101, Jon introduces us to Hare’s PCL-R’s checklist (check it out and diagnose a friend or even yourself for fun).  To you and me, this is a list that most of my colleague’s use to diagnose psychotic episodes and dangerous criminals who might have Antisocial Personality Disorder or as its better known: be psychopathic.

After Jon attended this conference with his new armoury, he decided to visit the former president and death squad leader of Haiti, now in a very secure mental institute in the middle of nowhere in America.  The chapter heading “Night of the living dead” really describes the next person he meets – an American multi-millionaire Al Dunlap, a very ruthless and successful businessman who would quite happily kill his grandmother if he thought it would go in his favour.  Finally, he visits the UK again to investigate a former MI5 agent David Shayler and those ever increasing conspiracy theorists who deny such actions as 9/11 and 7/7 ever happened.

The one thing that ties in all Jon’s country hoping (apart from building up those air miles), is that every main person in this book is a psychopath.  The Psychopath Test is a fantastic book that Jon intricately weaves together with various people and stories to show us the darker side of mental health and how such individuals don’t just kill people, but rule our lives and run big businesses.  It’s worth setting the time to read this great book.

This book is best summed up by Jon’s own words on page 283, near the end of the book:

Jon: Then he shot me a pointed look.

Meet the Reviewer: My name is Benjamin Thompson and I am a final year honours student in Forensic Psychology and hope to start my Masters in 2018/19 academic year. My passion is for all things legal and medical, and this field mixes the two. I hope you enjoy my review on this great site. .

‘The Psychopath Test’ by Jon Ronson is published by Picador and is available at Amazon.

Psychopaths are all around us so a famous psychologist says. Politicians, our boss to the old lady next door. Jon Ronson in this acclaimed book ‘The Psychopath Test’ uncovers the dark and seedy side of society, the one nobody knows exists! Delve in at your own risk, you might become a psychopath……

Juvenile Life Without Parole Sentences: Are They Justified?