A book which brings together the psychological theory of criminal profiling with numerous examples from serial killers themselves, it is an interesting and informative read 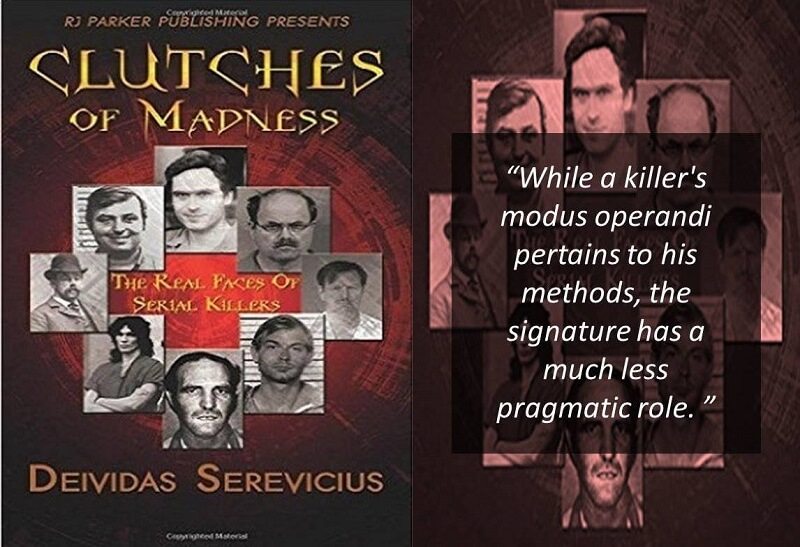 Share on FacebookShare on TwitterShare
“Invisible until they don’t want to be, some are charming and almost all manipulative. This book is an introduction to serial killers, including their traits, attributes, why they kill, how they get caught, profiling, and characteristics.”

What makes a serial killer?  The most terrorizing act a human can carry out is to take the life of another.  Serial killers do this repeatedly and often get away with it for years before they are caught.  The intrigue of those who kill has captivated the nation with a curiosity and an interest in the crimes themselves and in the criminal minds that have carried them out.

Criminologists and psychologists have long debated the motivations and personalities of these individuals. The research into how a person may evolve into a serial killer is increasing with neuroscientists now examining the brains of multiple murderers through neuroimaging techniques in order to try and distinguish any differences which may explain their behavior.

The personal history of each individual has also come under scrutiny.  Aileen Wuornos for example, a female serial killer who robbed and murdered numerous men, is discussed in Clutches of Madness as a solid example of the influence of childhood.

Abandoned by her mother while still a toddler and with her father in prison, Wuornos was raised by her grandfather who subjected her to horrific abuse.  Her attitudes towards men and clear anger at the world were no doubt molded by her childhood experiences. The lack of love and care that every child should receive creates a block for a young mind to develop the common social interaction skills, the emotions such as empathy and the healthy relationships that help shape a well-balanced adult. However, not all serial killers have had a childhood history as traumatic as that of Aileen Wuornos.

Jeffrey Dahmer, for example, grew up with both parents in what could be said to be a loving home. His home environment was still fraught, with his mother distracted by her own mental health issues and his father generally out of the home to avoid the tension, Dahmer was left to his own devices. He began to show disorganized and disturbed behavior at a young age with an unhealthy interest in dead animals and a difficulty socializing and making friends. However, no one could have predicted the brutal acts Jeffrey Dahmer would go on to carry out against 17 young men and boys.

“Milwaukee Cannibal Jeffrey Dahmer had a hobby of biking around the neighbourhood, collecting dead animals (roadkill) to dissect.”

What is clear, is that not all serial killers necessarily have those signals in their history which could lead to conclusions as to why they kill.  Equally the factors involved for one individual may not be applicable to another, highlighting the complexity of the nature-nurture debate and the ongoing search for reasons why.

Author Deividas Serevicius has successfully brought together the psychology of those who kill and the information we currently know from research, with a wealth of examples from serial killers themselves.  For those unfamiliar with the so-called ‘high profile’ serial killers, this book provides an excellent overview of their crimes and their states of mind.

I did feel that early chapters would benefit from some sectioning and headings introducing each concept that is discussed. Furthermore, in places, the narrative does not always flow smoothly with snippets of information followed by an example serial killer. While informative this does leave you wanting more and feels a little jilted.

Some areas do read more like a list than a book chapter; ‘How Do They Choose Whom To Kill’ for example provides just one paragraph discussing the role of fantasy in the behavior of serial killers and then multiple single paragraphs giving brief information on a serial killer and how fantasy was involved in their crimes. ‘Why Do They Kill’ was a much better read, providing a breakdown of the seven categories the FBI have specified for motivation, which is interesting and informative with examples of serial killers who fit into each category and why.  ‘Profiling A Serial Killer’ in Chapter 6 was probably the most comprehensive and engaging section of this book.

“Mission-orientated killers generally aren’t psychotic. They want to make the world a better place to live according to their own attitude.  They think that they need to get rid of people who shouldn’t be a part of society or even walk on the Earth along with them.”

This chapter does go into some depth behind the techniques and methodologies of criminal profiling including some history on how it was created and how it has been used.  The different stages of profiling are discussed giving a sequential idea of how a profiler goes from the details of the crime through to creating a profile and applying it within a criminal investigation.

These sections do give an informational and educative read on these cases and what we know about the crimes and the individual responsible. A full collection of serial killers are included in this book, with information and analysis provided on The original Night Stalker in Southern California, The Long Island Killer, the elusive Zodiac Killer, Dennis Radar the BTK killer, UK serial killer Dennis Nilsen, the Yorkshire Ripper Peter Sutcliffe and of course Ted Bundy and Jeffrey Dahmer.

“While a killer’s modus operandi pertains to his methods, the signature has a much less pragmatic role.  It just serves the emotional or psychological needs for him.”

This book overall is a fairly quick read at 136 pages but does give some good information on the well-known serial killers. For a basic introduction to serial killers and criminal psychology this book is illustrative and filled with examples and facts on many serial killer cases. The numerous photos included do very much add to the narrative. Reading about the horrific crimes carried out by an individual hits home much harder when you see a photo of that individual.

There are some crime scene photos included however although some are graphic, these have been tastefully chosen and are not the gruesome and undignified photos of crime victims that can be found elsewhere. Clutches of Madness: The Real Faces of Serial Killers does indeed live up to its title.  A behind-the-scenes look at the lives and the minds of some of the worst serial killers which have operated in the US and the UK.

It is a collection of case files but with a deeper analysis exploring the techniques involved in criminal profiling alongside the varied and complex motivations which can often drive these individuals to carry out their horrific crimes against others.

Geared more towards those new to the subject of serial killers and criminal profiling, this book provides an excellent introduction to the topic and certainly a useful refresher for those more familiar. If you are looking for a book covering the major serial killers giving a glimpse into their criminal minds, Clutches of Madness will not disappoint.

You can purchase a copy of Clutches of Madness: The Real Faces of Serial Killers at Amazon.

Trying to understand how and why a serial killer can carry out their brutal and terrifying crimes against others is a topic of ongoing interest. In Clutches of Madness, a number of the high profile and most well-known serial killers are covered, providing detail on their crimes and their states of mind. A book which brings together the psychological theory of criminal profiling with numerous examples from serial killers themselves, it is an interesting and informative read for those curious about the subject. A detailed chapter on the methodologies of criminal profiling is written alongside chapters on how serial killers can get away with murder and how they have been eventually caught. A book more for those new to the subject, it provides a solid overview populated by images which enhance the text. A quick but illustrative read into the crimes of serial killers and what hides behind their seemingly normal exterior.