No longer can a criminal commit a heinous crime and disappear into the night leaving no trace of their presence. 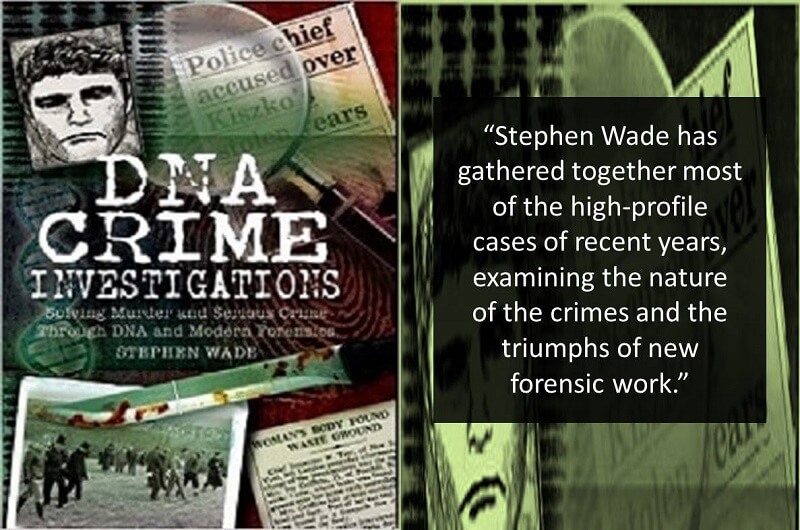 Share on FacebookShare on TwitterShare
“When Professor Alex Jeffreys worked with Leicestershire police on the Colin Pitchfork case in 1986, a revolution started in the application of forensic expertise. With new DNA sampling in their armoury, officers throughout the land are having successes when reinvestigating serious crimes. Cold cases are hot again.”

In DNA Crime Investigations author Stephen Wade has provided a thorough account of how DNA testing and evidence has been used in some of the most high-profile criminal cases in the UK. The science of DNA has not been omitted with comprehensive information on the biology of DNA, its structure and the methods used in testing DNA within criminal forensic science. This introductory chapter is well-written, logical and clear giving a solid base for anyone interested in the mechanics behind the science.

Particularly interesting is how this applies to crime scene analysis and the different sources of DNA which can be found in the aftermath of a crime. No longer can a criminal commit a heinous crime and disappear into the night leaving no trace of their presence.

Each chapter discusses an individual case, showcasing the range of circumstances where DNA testing and evidence can be used. Chapters are ordered chronologically, moving through the years towards modern-day in a logical and well-received design.

The case of Colin Pitchfork is discussed early in DNA Crime Investigations. The conviction of this individual was the first in UK history for a murder charge based on DNA evidence. The rape and murder of two young women had been solved due to the techniques of DNA testing. Furthermore, it was evidence which led to a full confession from Colin Pitchfork and a prosecution case which ensured he would not be released from prison for a very long time.

In some places, the sentence structure in this book can be a little disjointed. Long sentences appear frequently which can cause overload and a trip back a few lines to reaffirm what you have just read. The subject matter of DNA Crime Investigations, as the title suggests, has a scientific undercurrent and this is not a book for someone who is simply looking for a skim read of cases involving DNA evidence.

Paragraphs move through topics somewhat rapidly with a lot of information to take in. A great advantage in terms of informational gain and it does make for fast-paced reading; however, an alert mind is needed to keep up.

While DNA evidence has been a huge breakthrough in science and criminal investigations, in particular, there are some cases that science just cannot solve despite high hopes. The murder of Keith Lyon is one such case. A 12-year-old boy heading off to the local shops was set upon and killed in Brighton in 1967. He suffered a vicious attack with 11 stab wounds to the stomach.

Despite a knife being found near the murder scene, the trail of his killer went cold and both his parents died never knowing who had done this to their child and why. In 2002 a discovery in a storage room led to a bloodstained tissue and a cigarette end being tested, giving hope that these items would give up his attacker.

This hope, however, was in vain, despite renewed testing no new information could be gained and in this case, the senseless murder of an innocent 12-year-old boy still lies unsolved.

“It is dust….we can work with cells that have been ignored for years, not least because they are invisible to the naked eye. As long as they have not been got at by the damp or mould, they could still be used even after all this time” – Forensic Scientist Jonathan Smith, Keith Lyon case, 2006

There are many famous cases covered in DNA Crime Investigations including the Rachel Nickell case, where a 24-year-old was brutally murdered on Wimbledon Common in London in 1992 involving a complex and controversial police investigation.

The Cardiff Three and the murder of Lynette White in 1988, resulting in a large scale miscarriage of justice and the World’s End Killings in 1977 which saw two 17-year-old girls murdered in Edinburgh and a debatable acquittal of the only suspect in the case, before a conviction of the same man in 2014.

The use of criminal profiling within complex cases is also touched upon by author Stephen Wade, particularly when discussing the case of Rachel Nickell and the wrongful perusal of Colin Stagg for her murder. Stephen Wade refers to a number of influential criminal profiling books including “The Jigsaw Man” by criminologist Paul Britton and “Criminal Shadows” by Psychology Professor David Canter.

The ethical and legal aspects of DNA profiling and specifically the UK government maintaining a nationwide DNA database is also given attention. A complex debate which has been raging for many years and still today causes many to state their opinion and their concerns.

Returning to this issue in the final chapter of DNA Crime Investigations, Stephen Wade gives a comprehensive summary of the issues at hand and discusses the ethical concerns involved.

This completes a well-rounded inclusive book on the use of DNA in criminal investigations. Written in an authoritative yet comforting style giving the reader confidence in the facts they are reading, DNA Crime Investigations is a book I am sure all readers will learn from. It is an enlightening and enjoyable read and a definite winner for any true crime enthusiast who is keen on the mechanics and science behind the modern-day forensics within criminal investigations.

You can purchase a copy of DNA Crime Investigations: Solving Murder and Serious Crime at Pen & Sword Books.

The scientific development in DNA testing has not only led to the identification of criminals responsible for some very serious crimes but has also been able to prove individuals innocent. In DNA Crime Investigations, author Stephen Wade provides a comprehensive book on the science behind DNA, the methods within criminal investigations involving DNA collection and testing and a chapter by chapter analysis of criminal cases where DNA evidence has been used. This is not a book for those looking to skim read, it is a book which requires an alert mind to follow the science and one which in places long sentence structure causes some rereading. Overall this is a fascinating book delving deep into some of the most high profile criminal cases in the UK and providing insight into the use of DNA evidence in those cases. An enjoyable book I am sure readers will learn from and will certainly appeal to those interested in the mechanics behind the science.