by Fiona Guy
in Book Reviews
A A 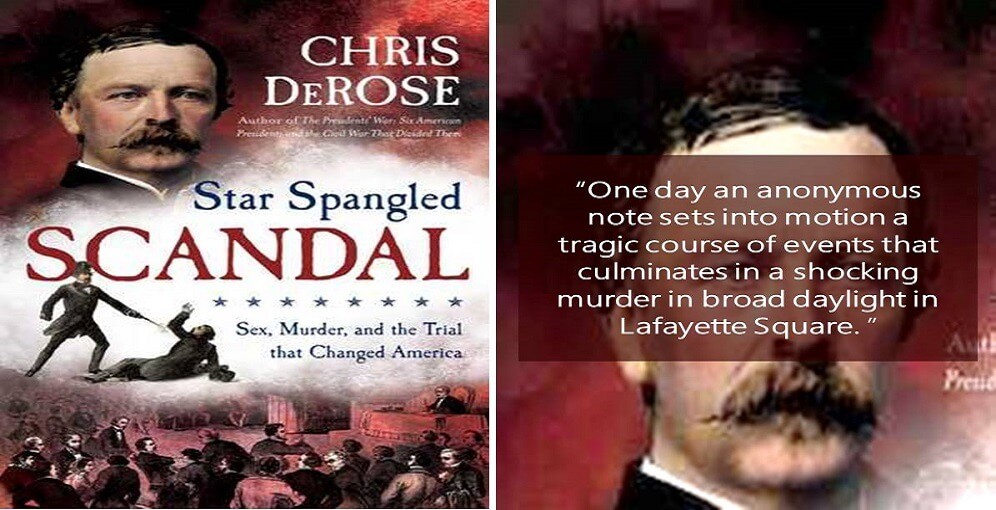 “This is the riveting true story of the murder and trial that sparked a national debate on madness, male honor, female virtue, fidelity, and the rule of law.”

The cold-blooded murder of a US Attorney in broad daylight had captivated the nation. As the assailant advanced firing his pistol, if the multiple shots he aimed at his target didn’t prove his intent to kill, the words he shouted at the same time left no doubt. “You villain, you have dishonored my house, and you must die!” This was the scene on Sunday 27 February 1859 in Lafayette Square, the famous picturesque location that sits quietly overlooked by the White House in Washington D.C, with Andrew Jackson proudly depicted in a casting mounted on his reared up horse Duke, at the Battle of New Orleans.

The assailant was Daniel Sickles, a US Congressman distraught and in a state of madness after the discovery of his wife’s infidelity. Her affair was with Philip Barton Key II, the U.S. Attorney for the District of Columbia and the son of Francis Scott Key, the man who wrote America’s national anthem, ‘The Star-Spangled Banner’. This murder had passion, grief, high-powered influentials and a sordid affair, elements that sent the national press and public wild with curiosity and speculation.

Sickles was a public figure, a member of Congress. To have carried out such a shocking brutal public murder stunned and fascinated the nation in equal measures. Everyone wanted to know what had happened and why and what the outcome of the impending court case would be.

The murder of Phillip Barton Key, known as Barton to those who knew him, has gone down in history as an infamous event, discussed and written about repeatedly in the 160 years that have now passed since it happened. Few however, have managed to piece together the full story of these events and present them in their entirety.

Star-Spangled Scandal: Sex, Murder and The Trial that Changed America by Chris DeRose gives a detailed, in-depth and fascinating insight into this case from start to finish. Using newspaper articles of the time, eyewitness testimonies and trial transcripts, DeRose has shown this murder in its raw form giving readers the opportunity to discover who these two characters were and how their lives entwined, leaving one dead and the other facing trial for murder.

“A horrible, horrible thing has happened! Sickles has killed Key, killed him most brutally, while he was unarmed!”

In the immediate aftermath of the murder, news spread quickly and a huge crowd amassed outside the Sickles home. Teresa Sickles was still inside in her room where she had remained since confessing to the affair the previous evening, and her husband told her simply “I’ve killed him”. Sickles was then arrested and taken to prison.

In 1859 infidelity, illicit affairs, extramarital romances were taboo subjects. Not to be spoken about or openly discussed. Of course, there were comments and rumors but it was widely frowned upon and certainly not the open dialogue like it is today. To discuss the details of such events was strongly disapproved of and altogether socially unacceptable. Daniel Sickles knew of rumors circulating about his wife but it was a blunt and graphic letter signed only by an R.B.G. that informed him of the detail.

Daniel Sickles shot Barton Key multiple times. There was no doubt he wanted him dead and he succeeded. Many felt Barton sealed his own fate by having an affair with a married woman and Daniel was in his rights to shoot and kill him for it. Others felt murder can never be right and even a Congressman cannot be excused from the arm of the law.

Newspapers published that the public were losing sympathy towards Daniel as they began to learn the stories of his past emerging very much encouraged and sought out by the Key family; stories of Daniel’s history with women. The longer the trial was delayed for the more his defense team especially feared this would manifest bringing Daniel closer to a certain conviction.

Star Spangled Scandal is a meticulous account of the events of the shooting, the trial, and the aftermath but it also gradually leads up to the events. We learn who each character is in this story, their backgrounds, how they came together and how their lives then dramatically changed overnight. By the time we reach the details of the shootings, we already have a feel for these characters.

Act I: The Washington Tragedy that opens this book, is very much background focused containing information and detail on the politics of the time; who was who in the White House, the various elections and presidential campaigns and of course, where Daniel and Barton fitted in. It is an interesting section but can be bogged down a little with this detail in parts. The final chapter describing the shooting itself is where this book livens up and becomes a more riveting read. Certainly, this is helped by the knowledge and sense of familiarly we now have for each of the key characters involved due to those earlier chapters.

The author makes use of quotes abundantly throughout the book. From newspapers articles and headlines, opening and closing statements in court, letters and witness testimony. Most are informative and aid the narrative but it can be quote-heavy.

When the case did come to trial in April of 1859, the issue of temporary insanity populated Daniel Sickles’ defense. They presented a man torn up with despair and humiliation at his wife’s affair heightened that morning by the man she was seeing being was so brazen as to come by his house trying to get his wife’s attention. He saw red and in an uncontrollable rage was unable to stop himself. Was Daniel Sickles insane at the time he shot and killed Barton Key? He was described by one witness who saw him after the murder …“He was in a state of frenzy and I feared if it continued he would become permanently insane. Screams of the most frightful character, unearthly and appalling, something between a sob and a moan.”

The trial chapters in Act II of the book are an insightful glimpse of how the trial was approached from the prosecution and the defense. The various witness testimonies, questions they were asked, cross-examinations and the response to unfolding events from the national press. Different newspapers took differing opinions on the relationship between Barton and Teresa, on Teresa herself, Daniel and the shooting. Some blamed Daniel, some laid responsibility at Teresa’s feet. “It is convenient after the shame has been made public, for the guilty one to allege that she was seduced.”

Remember this was 1859, New York. The argument over whether evidence of adultery could be admissible evidence in a courtroom was a thought-provoking read. In today’s world, there would be no question, yet in 1859 it was a heated debate and an important decision.

The prosecution said evidence of adultery had never been admitted in such a trial before. The defense were desperate to have the evidence heard in open court as proof of the affair that sparked the murder.  The eventual decision from the judge to allow the evidence caused quite a stir. Private details of Daniel, Teresa and Barton would now be aired in court. Airing information on the anonymous letter and intimacy between the two lovers alongside the inner private writings from a wife to her husband confessing her sinful liaisons with another man, was a shocking and sensational turn during the trial of Daniel Sickles.

The newspapers didn’t know what to do. Torn between wanting to report the goings on in the trial but still respecting readers and not wishing to offend by publishing the details thought of as private and taboo. Some did, some didn’t, and some published only parts but the public were captivated. “…the crowd flooded in like water through a broken dam. Some climbed in through the windows…” such was the desperation of the public to get a seat inside the courtroom for the murder trial.

This is a well-researched book. It is clear DeRose has trawled the archives and no doubt spent many hours piecing everything together and debating just how to present this story in its entirety. The three sections of the book make sense. There are numerous chapters within each section, some very short which at times was distracting. It would have been nice to have seen some of this information interweaved into the story more than separate chapters; however, this did not detract too much from the powerful story that was being told. Overall a very enjoyable book that is successful in telling a historic true crime tale forever in the annals of America’s history.

‘Star-Spangled Scandal: Sex, Murder and The Trial that Changed America’ by Chris DeRose is published by Regnery Publishing and available at Amazon

In 1859 in the beautiful Lafayette Square overlooked by the White House in Washington D.C. a brutal murder shattered the areas wealthy and respected image. Congressman Daniel Sickles had shot and killed the man he discovered had been having an affair with his wife. US Attorney Phillip Barton Key was shot repeatedly leaving no chance of his survival. In Star Spangled Scandal, author Chris DeRose has painstakingly searched and collated the records of this tragic event, from trial transcripts and witness testimonies to newspaper articles informing the fascinated public of each development in the case. With quotes used throughout, he explores the backgrounds of each of those involved, the shooting itself and the sensational murder trial and aftermath leaving no stone unturned. A fascinating and insightful book providing the full story of this historic crime certain to satisfy the true crime curious.