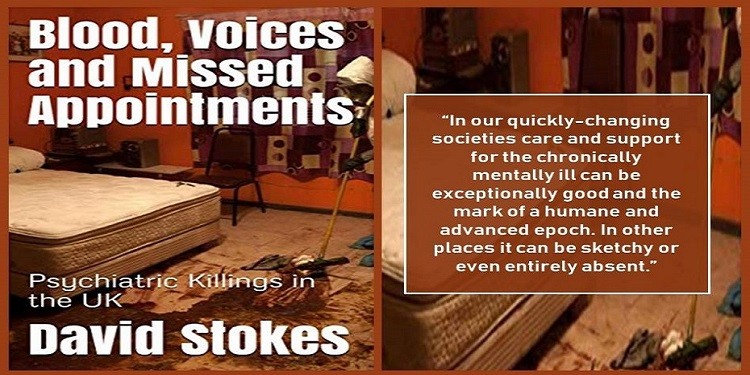 In the UK, 11% of homicides are carried out by someone who is mentally ill. For the past 26 years, experts at Manchester University in England have examined every case of psychiatric murder. Their aim was to identify any patterns in these cases, any failures that need to be addressed to reduce the risks of future attacks, and their research has improved the care and support for thousands of mental health patients. In 2018, their £100’000 per year funding from NHS England ended.

Blood, Voices and Missed Appointments by David Stokes an honest and unflinching look at psychiatric murders in the UK. It is an area not often discussed and Stokes is careful not to place blame or point fingers. He is sensitive to the extreme difficulties and anguish those suffering with a severe mental illness have deal with every day. This book has no sensationalist language and is not aimed to suggest all those with mental illness pose a threat of violence. It is a close look at the mental health system within the UK at the current time, examining nine case studies and discussing the difficulties faced by the frontline staff, the social and political issues which come into play and the overall challenges that are present. The innocent victims of these crimes, in most cases strangers to the offender, are also discussed.

While Stokes does of course advise of the crime committed in each of these case studies, he does not focus on the gruesome details. Instead he is concerned with how these crimes happened and the areas in which they highlight. Rather than use media reports he has focused on the court documents, the official reports, the patient’s own statements and their families’ statements to help tell their story and examine each case.

Nicola Edgington is one such case covered. In November 2005, Nicola murdered her mother with a knife. She spent four years in in-patient treatment before being discharged into community accommodation with ongoing support in place. In October 2011, she attended a local London hospital emergency department for her mental health and while waiting to be assessed made numerous calls to 999 in a distressed state telling operators she was very unwell, being ignored and had killed before and could do again if police did not attend.

Nicola was taken into the hospital’s adjoining psychiatric unit but escaped through a faulty door. She purchased a knife and stabbed two women in the street before she was arrested, seriously injuring one and killing the other. Nicola Edgington had a diagnosis of paranoid schizophrenia and doctors believed she was in a psychotic state at the time of the attacks.

David Stokes has met and interviewed frontline mental health workers as part of his research and indeed has his own experience as an agency worker within health rehabilitation units to draw on. He makes use of academic studies and official investigation reports when discussing these issues providing solid grounding for his discussions.

While there are clearly frustrations expressed by Stokes within these topics and in places his views and thought patterns are more apparent than others, this is obviously a topic he has put a great deal of thought into and feels passionate about. Throughout the book key terms and phrases are in italics which initially are useful for emphasis but this can get a little tiresome towards the end.

Blood, Voices and Missed Appointments is not a simple rundown of case studies but rather an ongoing discussion. It is reflective and active in narrative. It asks questions and provides thought-provoking chapters. In his writing David Stokes is not shy in posing these questions and he presents a frank and bold discussion of areas such as deinstitutionalization, community mental health care, NHS support and the availability of mental health residential places and ongoing treatment and monitoring for mental health patients.

Another case discussed in this book is that of Daniel Gonzalez. Daniel murdered four people stabbing them to death before attempting to kill two others in a period of 48 hours across London and Sussex in September 2004. His mother begged for help for Daniel before he committed these crimes, knowing he was struggling with his mental health and not getting the help and support he needed. She wrote to her MP and asked “Does my son have to actually murder someone to get help?”

Daniel modelled himself on the Freddy Krueger character from the Nightmare on Elm Street films and was labelled the ‘Freddy Krueger Killer’ after the murders as a result. Stokes discusses the reports that were published examining this case and what happened. Failures in the system in not supporting Daniel, difficulties in engaging with Daniel when support was there, lack of resources and human error were all noted as factors.

Stokes looks at the care and support for Daniel in the years before he committed this crime and the attempts to provide help for him in the aftermath. Daniel was sent to Broadmoor secure hospital after the murders. After numerous self-harm incidents, he took his own life by cutting into his arm with the edge of a broken CD case and bled to death before medical staff could save him.

Blood, Voices and Missed Appointments is a well-researched book that provides an eye-opening and interesting read into an important area within criminological studies and the current condition of mental health provision within the UK.

If you would like to read Blood, Voices and Missed Appointments, the book is available at Amazon.

Blood, Voices and Missed Appointments shines a spotlight on UK cases of psychiatric killings, where those within the grips of psychosis have committed murder. It is an honest examination of this important topic through the use of case studies and as a wider social and political issue. Budget and funding cuts, a lack of resources, staff, and training are all factors that undoubtedly affect the care and support that can be provided to those who need it most. Author David Stokes has done his research and consistently refers to academic publications as well as official reports into the particular cases he discusses. He provides a thought-provoking and informative read on an area of murder that is not often discussed.