Home » Book Reviews » I, a Squealer: The Insider’s Account of the Pied Piper of Tucson Murders

The publication of a manuscript written in 1967 records in expressive detail the real story of serial killer Charles Schmid. 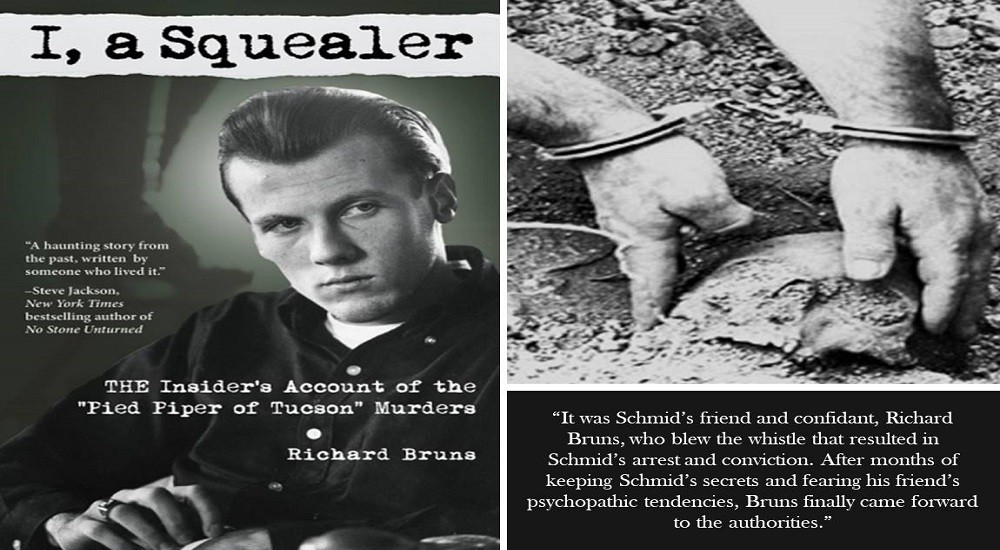 “Richard Bruns is the man who turned Charles Schmid into the authorities and was the star witness for the prosecution. I, a Squealer is his firsthand account of his friendship with that psychopath, the details of getting involved way in over his head, and how he finally summoned the courage to come forward to the authorities in order to end Schmid’s deadly rampage.”

What would you do if you discovered your friend was a serial killer?  In 1965 in Tucson, Arizona an appalled and shocked 20-year-old Richard Bruns couldn’t quite get his head around the idea that the man he thought he knew as a close friend, was not only murdering women but he was enjoying it. In late autumn, unable to cope any longer with what he knew, Bruns told the police everything. Now in fear of his own life and that of his ex-girlfriend, Bruns was trapped in an unimaginable situation. He told them that his friend Charles Schmid, who he affectionately knew as ‘Smitty’, was a serial killer.

“I had a premonition, a frightful premonition, that I could be walking to my death. He might kill me. Of course. Why shouldn’t he kill me? I knew too much. Maybe that was why he’d agreed to bring me there, to kill me.”

Barely out of his teens, Bruns gave evidence against his friend, including showing police where the bodies of two of his victims lay.

He faced down Charles Schmid in an enclosed interview room, where he discovered his pal was intending to blame him for the murders of 15-year-old Alleen Rowe, 17-year-old Gretchen Fritz and her younger sister 14-year-old Wendy Fritz. “He was going to say that I did it, that I killed the girls,” he writes, “He’d planned it this way. I could only think that it had all been planned.”

After reporting Charles Schmid and testifying against him in his trials for murder, Richard Bruns wrote down his story and traced his journey from a carefree teen in the vintage city of Tuscan, hanging around with friends and chasing pretty girls, to watching his friend descend into a dark and sinister world which he relished, displaying increasingly disturbing behaviour as each day went by.

I, a Squealer is the publication of the manuscript that Richard Bruns wrote in 1967 after Charles Schmid had been sentenced to death for the murder of the Fritz sisters. It tells his story in candid detail, noting his experiences with Schmid and his own introspections at the time that he lived them.

“I wanted to plead with him, to make him understand. Man, you’re sick Don’t you know that? I had to. You’re sick. You need help.”

Today, this is a memoir that would be almost impossible to write, with memories skewed by the passage of time and thoughts altered through life experience in the intervening years.

In cases of serial killers and ones who received as much publicity as the Charles Schmid case, it is rare to have the opportunity to see an insider’s view. To feel the fears he faced and experience the horror of a person wrapped up in cold-blooded murder through no fault of his own.

Charles Schmid is the man nicknamed the ‘Pied Piper of Tucson’.  As a teenager he was charismatic and charming, drawing people to him and hooking in young teens who looked up to him and wanted to be around him.  This personality, however, began to slowly reform, witnessed up-close by his friend who struggled to comprehend the person Schmid was becoming.

Related: Absolute Madness: A True Story of a Serial Killer, Race, and a City Divided

Richard Bruns is a somewhat reluctant author. Having written this manuscript back in 1967, it was filed away with no real desire to pull it back out and certainly no intention to publish his words for the world to read.  Eventually persuaded by his daughters that his is a story that should be told, Bruns has allowed his writings to be published in the public domain. Considering the media interest in this case during the 1960’s when it broke and the years of speculation and accusation that Richard Bruns faced himself due to his association with Schmid, this decision was a brave one and took courage. As a reader, I am left in no doubt that it was the right one.

This is a book which is impossible to put down once you begin reading.  From page one, the reader is absorbed into the story ensuring a necessity and desire to keep turning the pages. The writing is free-flowing with an edge, because of the subject matter and the knowledge that these words are a first-hand account of events, the narrative is engaging and powerful.

“I was so horror-stricken I couldn’t even think. I was too stunned to even feel emotion. The gruesomeness, the brazenness of it was impossible for me to grasp right away. It was too horrible a sight to accept as the reality I had come in search of.”

It is a reflective piece of writing in many ways and a personal one. The author has opened up a very painful chapter in his life that changed him as a person, and now he has invited others to read his story.

The publication of this work also serves to correct many of the myths, perceptions and simply incorrect facts that were included in the whirlwind of press and media coverage of these murders.  Richard Bruns was accused by Charles Schmid of carrying out these killings.

Many in the area of Tucson believed he was involved, and some believed he had faced criminal charges, both inaccurate beliefs but ones which made staying in that area after the trials a difficult process for Bruns.

I, a Squealer is the true story of Richard Bruns and how he blew the whistle on the serial killer who became known as the ‘Pied Piper of Tuscan’.  It is a gripping read telling a personal story of a startling dilemma a young man found himself facing and the internal battle that followed to adhere to his moral conscience.  It highlights the normality of life that can twist and transform into sinister darkness as the human mind sinks lower and lower, almost too fast for others to keep up with.

Day by day Richard Bruns watched as his buddy became more unstable, more dangerous and more psychopathic. In order to understand the criminal mind, how the everyday individual can become a figure who can rape, strangle and kill is a transformation that needs to be examined. I, a Squealer is an opportunity to do just that through a rare witness account of how one man unraveled and spilled into the darkest layers of depravity.

‘I, a Squealer’ by Richard Bruns is published by Twin Feather Publishing and available at Amazon.

The discovery that a person you considered to be a close friend had begun to murder local girls in cold-blood, and seemingly relished the task, is an impossible scenario to imagine. For Richard Bruns, he didn’t need to imagine for in 1965 his friend Charles Schmid revealed himself as a serial killer. The roller coaster ride that followed saw Bruns argue with his inner conscience and sense of moral right and wrong in a battle of how to handle the situation he had found himself in. Charles Schmid, who became known as the ‘Pied Piper of Tuscan’ was stopped from killing more innocent women because of the actions of Richard Bruns. I, a Squealer is the publication of the manuscript he wrote in 1967 recording in expressive detail the real story of Charles Schmid and how his complex relationship with him deteriorated as his friend’s mind continued to spiral out of control. In an honest and gripping account, I, a Squealer gives a rare opportunity to read an insider’s view. It provides a thought-provoking read that is absorbing from the very first page.