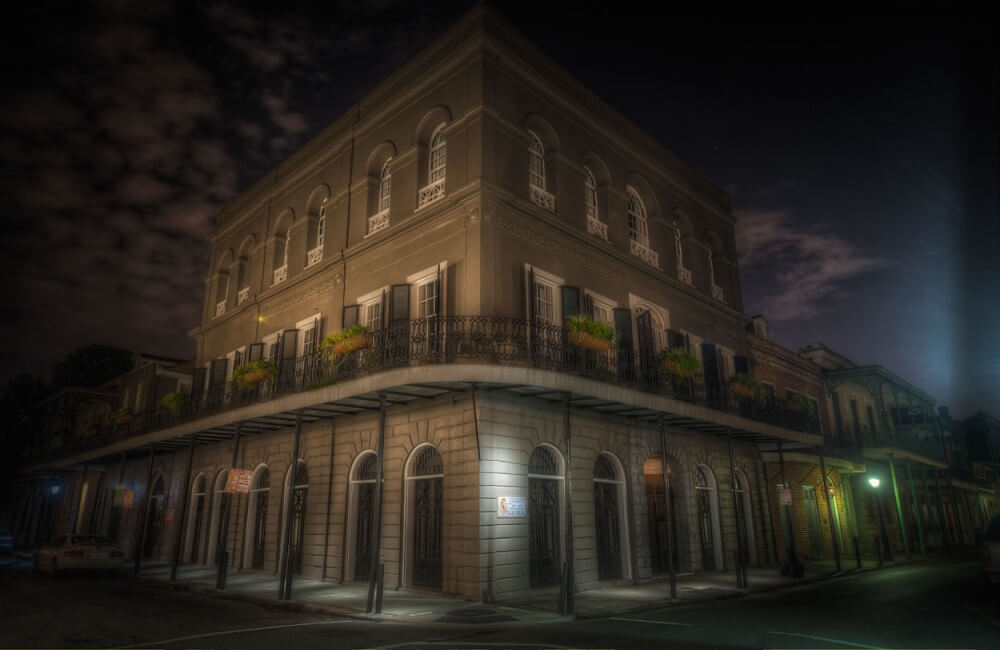 An article by Harry Parsons from Arcadia Publishing, the largest and most comprehensive publishers of local and regional books in the United States. Explore the history of crime in America with fascinating accounts of prison life and the stories behind some of the nation’s most notorious criminals.

Actress Kathy Bates played Madame Delphine LaLaurie in American Horror Story: Coven for the third incarnation of the bizarre, terrifying show, but few know that Lalaurie was actually a real person. The legendary LaLaurie mansion is generally considered one of the most haunted houses in America due to the demonic brutality that occurred there. Of course, the writers of the show took creative liberties with the history, but LaLaurie was as real as the horror that took place in her home.

When Dr. Louis LaLaurie and his wife, Delphine arrived in the French Quarter of New Orleans to buy their mansion in 1832, the two made quite an impression. The local society knew Delphine was related to the city’s mayor, and word quickly spread of her beauty and grace.

The couple kept the outside of their home simple and tasteful, but those invited inside experienced a world of luxury. The LaLauries designed the interior specifically to impress and entice visitors. Hundreds of candles in great chandeliers kept the house glowing as guests walked through mahogany doors hand-carved with flowers and ornate faces.

The servants carried delicious food on delicate china to the grand table, and the dancing for the evening took place on plush, Oriental rugs. Madame LaLaurie had beauty, style, influence, and prestige. Even her daughters became known for their fine dresses. The ultimate hostess, LaLaurie pampered her guests as they ate, laughed, and danced in her home. No one suspected the horrors taking place right above them in the home’s attic.

LaLaurie and her slaves

In public, LaLaurie was kind and thoughtful to slaves. Slavery was legal at the time in New Orleans, but there was a law in place to prevent mistreatment of slaves by their owners. The LaLaurie’s lavish lifestyle required a large staff of slaves.

Contrary to public appearance, Madame LaLaurie had no regard for the lives of her slaves. All those lavish dinners meant their cook spent hours in a hot kitchen. To prevent rest, she chained her kitchen helper to the stove.

Eventually, rumors began to circulate about the private activities in the mansion. A neighbor had the misfortune of witnessing LaLaurie chase a young slave girl named Leah, 12, with a whip. Leah was Delphine’s personal servant. The young girl ran up to the roof of the house to escape the whipping, but her mistress followed. Desperate, Leah jumped from the roof and fell to her death.

The neighbor reported the incident to a local lawyer, and he was dispatched to the residence to remind the LaLauries of the law. Although he saw no mistreatment during his visit, the rumors of misconduct continued. Witnesses continued to cite instances of slaves being in the house one day and gone the next, with no explanation.

The authorities impounded and auctioned the LaLaurie’s slaves, but the cunning LaLaurie convinced several relatives to buy the slaves and then sell them back to her.

The cruelty comes to light

LaLaurie may have been beautiful and smart, but she was also evil, and ruled her slaves through fear. Although many families beat their slaves, the atrocities carried out by Madam LaLaurie were truly horrific.

The alleged cruelty eventually influenced the couple’s social standing. The polite society of New Orleans began to turn on them. People declined dinner invitations, and Madame found herself alone more often as the whispers of terrible tortures intensified in town.

In April of 1834, a fire broke out in the home, exposing the secret torture chamber on the attic level. Firefighters chopped down the door to the attic, and the sight they encountered was appalling. The New Orleans Bee, the local city paper, reported even those with the strongest stomachs had a difficult time viewing and reporting on the contents of the attic.

The original article offers the following account of the scene:

“…Seven slaves more or less horribly mutilated were seen suspended by the neck, with their limbs apparently stretched and torn from one extremity to the other. Language is powerless and inadequate to give a proper conception of the horror which a scene like this must have inspired. We shall not attempt it, but leave it rather to the reader’s imagination to picture what it was.”

Journalists printed the exposé some days after the fire, but by then, the LaLaurie family had left town. Furious, their neighbors mobbed the home, looting and wrecking what remained. The reporter had a hard time containing his glee as he wrote:

“Since the above was in type, the populace have repaired to the house of this woman and have demolished and destroyed everything upon which they could lay their hands. At the time of inditing this fury of the mob remained still unabated and threatens the total demolition of the entire edifice.”

So, what happened to Madame LaLaurie? Many rumors circulated about their whereabouts after the gruesome discovery. At the time, many people believed they were being kept safe by relatives in small towns around the city, yet most historians believe they escaped to France.

While history remains unclear, the legend of Madame LaLaurie lives on today in stories, films, and television series.

The LaLaurie mansion still stands today, and people consider it one of the most haunted properties in the country. Throughout the years, various landlords renovated the building, turning it into apartments and even a school. Several families even attempted to live there, but none made it beyond a few months, reporting that they heard horrible cries and groans calling out in the night.

While the horrors may have been embellished through the decades, there is no doubt Delphine LaLaurie abused her slaves, subjecting them to shocking cruelty. She became a grisly legend who continues to horrify everyone who hears her ghastly story.