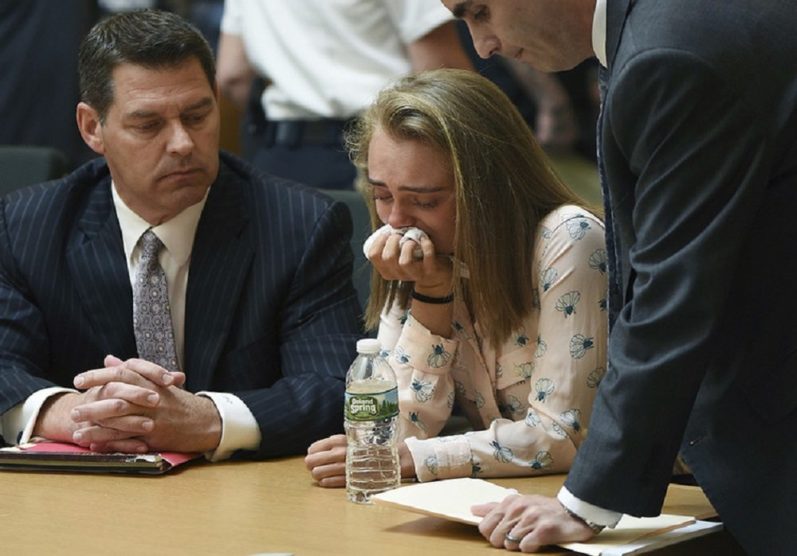 This article is by David Rossman, Professor of Law at Boston University, republished from The Conversation, a collaboration between editors and academics to provide informed news, research, analysis and commentary committed to knowledge-based, ethical and responsible journalism.

In Massachusetts, a 17-year-old girl named Michelle Carter repeatedly urged her boyfriend, who had a history of mental illness, to kill himself. And then, he did. As Conrad Roy III sat in his truck in 2014 and was overcome by carbon monoxide, he had second thoughts. With everything going as planned, he got scared, opened the door and got out. That’s when Carter sent him a text message that said, as she recounted later to a friend: “I fucking told him to get back in… because I knew he would do it all over again the next day and I couldn’t have him live the way he was living anymore. I couldn’t do it I wouldn’t let him.”

After reading Carter’s message, 18-year-old Roy, who’d been receiving Carter’s text messages throughout the evening urging him to go ahead with his suicide plan, got back into the truck and breathed his last.

A tragedy? Of course. An atrocious and cold-hearted action by Carter? Obviously. Morally contemptible? By almost any ethical standard.

But as a law professor and defense attorney, I note two additional questions that come to my mind. First, was it criminal? And second, what are the implications for the judge’s verdict finding Carter guilty of manslaughter?

Massachusetts does not have a law specifically outlawing one person encouraging another to commit suicide. Some have criticized the verdict on that ground. But the common law (that is, the law developed over time by judges) of homicide in the Commonwealth of Massachusetts has recognized for 200 years that what Carter did was a crime.

In 1816, George Bowen, described at the time as a “hardened and abandoned wretch” serving time in the Northampton jail for petty larceny, convinced a prisoner in the cell next to his to kill himself, one day before the prisoner’s scheduled execution. Bowen was placed on trial for murder. Isaac Parker, the chief justice of the Supreme Judicial Court, instructed the jury that if they were convinced beyond a reasonable doubt that Bowen’s words “procure[d] the death” of his prison neighbor, then they should return a guilty verdict. Bowen’s jury acquitted him. But the legal principle remained, a point recognized by the United States Supreme Court in 1997 when it relied on the Bowen decision in a case holding that there is no constitutional right to assisted suicide.

In 2016, when Michelle Carter’s lawyers challenged the manslaughter indictment against her, Justice Parker’s successors upheld the notion that someone’s words alone can be the deciding factor in a homicide case if they are uttered in a context that makes them reckless and wanton, and actually cause another’s death.

The judge in the Carter case, who decided the case once she chose to have a trial without a jury, found exactly that. He concluded that the evidence showed Carter’s words actually caused Conrad’s suicide that night, and that she uttered them with a reckless and wanton disregard for their probable consequence. The guilty verdict, for all the controversy over whether words alone can kill, was well within the mainstream of Massachusetts law.

But what is more troubling are the implications of the verdict.

Of course, the judge’s actions decided only the case before him. But now the genie is out of the bottle. Who else might find the engine of the criminal justice system bearing down on him or her because of words less morally bankrupt than Michelle Carter’s?

Do doctors advising patients about end-of-life decisions have to worry about criminal prosecution if a patient stops taking medicine and dies as a result? Will family members have to urge their terminal relatives to do everything in their power to stay alive, lest they be prosecuted on the same theory as Carter’s?

In practical terms, such prosecutions will be possible only when the authorities find out about them. Unless you leave a trail of emails and text messages behind, you’re less likely to be found out. But that is not solace enough. A criminal law that is broad enough to encompass behavior that should not be punished can create unwarranted fear. And no one seriously contends that doctors or relatives counseling mature adults close to death should have to act in the shadow of a potential homicide prosecution.

We could just depend on the good sense of our elected prosecutors to stay their hand in such cases. But those who responsibly participate in end-of-life decisions by others should not have to rely on the discretion of people who are in the business of administering our system of punishment.

The Massachusetts Supreme Judicial Court’s opinion allowing the Carter case to go to trial gave a subtle hint that it would not look kindly on an extension of its ruling to these kinds of cases. The opinion took pains to point out that what Carter did was substantively different from the situation of “a person offering support, comfort, and even assistance to a mature adult who, confronted with such circumstances, has decided to end his or her life.”

But this kind of limiting language in a court’s opinion is simply dicta, or nonbinding. To provide a concrete and meaningful limit to the principle on which Carter was convicted would require legislative action, certainly in Massachusetts where the Carter verdict will have the most impact.

Perhaps it is now time for the Commonwealth’s laws to address this issue directly, eliminating all doubts about whether “words can kill,” and providing a safe harbor for those whose soothing words seek to make a dying person’s last days more tranquil. Massachusetts’ reaction to this tragic case can be a model for the nation.

David Rossman, Professor of Law, Boston University. This article was originally published on The Conversation. Read the original article.

In 2016 the FBI and Houston police were on the hunt for a real-life sniper believed to be a serial killer and robber whose M.O....