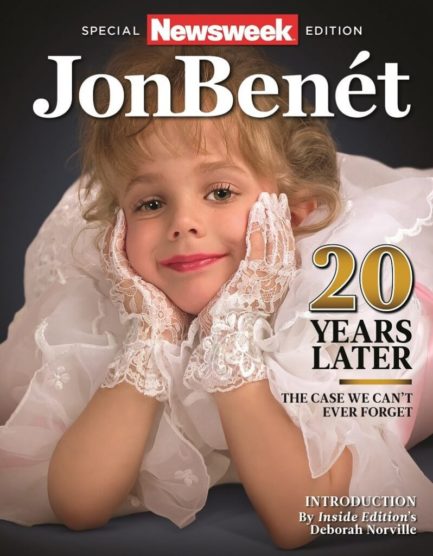 Share on FacebookShare on TwitterShare
Twenty-two years ago, 6-year-old JonBenet Ramsey was found murdered in the basement of her home.  A devastating and tragic death that to this day remains unsolved. The JonBenet Ramsey murder is a case ingrained in the minds of Americans. A case which involved a curious ransom note and a cloud of suspicion over who took the life of this innocent little girl.

JonBenet Ramsey was the daughter of John and Patsy Ramsey who lived in Boulder, Colorado. In 1996 on Boxing Day, Patsy Ramsey made a terrifying discovery at the bottom of the stairs inside their home.  A ransom note which claimed, “we have your daughter”. With a ransom demand of $188’000 and a promise that a phone call would come providing more information, the Ramsey’s called the police.  Upon a search of the house, the devastating truth was found with the body of JonBenet Ramsey in the basement of the home.  This little girl had been strangled, assaulted and her mouth sealed with tape to prevent her screams.

To mark the 20th anniversary Newsweek Special Editions put together a 100-page magazine focusing the murder, it’s aftermath and the hunt for the truth. The murder of JonBenet Ramsey captivated the nation in a way that few other crimes have.

It is a case remembered often for the beautiful child JonBenet was, a child who regularly entered beauty pageants following in the footsteps of her mother, a former beauty queen herself. The case sparked debate over dressing up a child, putting makeup on them and parading them within various beauty pageants, making them look much older than their years.

“The tragedy of JonBenet’s murder remains  cultural touchstone from the entire nation because the case was covered by the media like few events before or since.”

Parents who knew they were under suspicion and hired defense lawyers immediately which only caused more speculation. When they did agree to a formal interview with police they were once again slammed with speculation that they knew police were coming for them. Arguments on grooming, the risks of sexualizing young girls circled while still no further information came to light about who killed this little girl. JonBenet’s parents and family were under suspicion immediately, standard practice in a homicide inside a home, but the case drew speculation and accusations from all sides.

“Newsweek has delved through the archives and pieced together how we covered the case as it was unfolding.  None of the stories have been corrected using the benefit of hindsight to preserve the urgency, heartbreak and mystery we all experienced over the decades.”

Newsweek followed this case from the start, reporting on key stages and this special edition brings all these reports together for the first time. This includes analysis of the ransom note which Newsweek obtained a copy of and had former FBI head of document operations and research unit, Gerald Richards to analyze and provide his results. Analysis of the investigation, whether mistakes were made in the early stages after the murder and whether this hindered the progression of the investigation and cracking the case. The mystery of John Mark Karr and his false confession to the crime and the speculation, interviews, and theories behind the initial thoughts that it was JonBenet’s own parents who took her life.

This special edition is on sale at newsstands revisiting the murder of JonBenet and presents the reports, discoveries, accusations and mystery that surrounds this case.  For anyone who has been following the story of JonBenet Ramsey, this is a collection that should not be missed.

5 Types of Inmate Abuse In Prisons: It’s More Common Than You Think