Home » Book Reviews » Prince of Cons: The Revealing Autobiography of A Conman 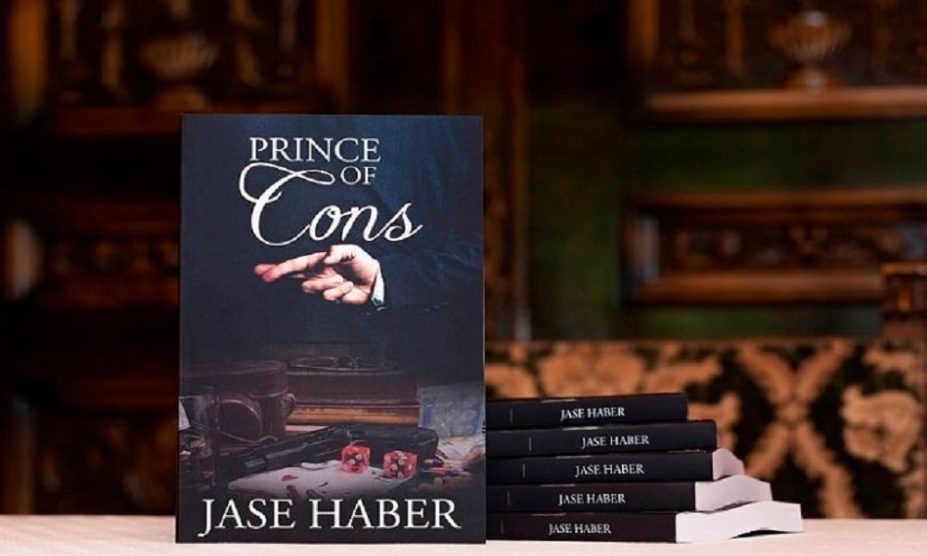 Share on FacebookShare on TwitterShare
“Read the true story of a modern conman whose biggest gigs pit him against giants of industry, fellow con artists, and even his own best interests. When you want to be the Prince of Cons, there’s no goal too high..”

Jase Haber is an interesting character who certainly has a story to tell.  His book “Prince of Cons” released this month is an autobiography of his life to date telling the true story of his scams and frauds developed at a young age that made him huge sums of money.  It charts his progression into a full-time dedicated fraudster and conman, but also provides a glimpse into his character and attitudes and the change within him as time moved forward as he realized what was important to him.  The awe of cash gradually wore off, replaced by a desire to find the one thing that makes him happy as a person, something that money can not necessarily buy and for Haber that was acting.

Jase Haber is the youngest child of three and it was apparent from an early age that his IQ fell within the gifted range. Placed within high achiever classes in school, Haber soon lost interest in school work and instead focused on something else he had discovered he enjoyed; scamming people. Selling items door-to-door for a local organization, Haber learnt he could make more sales by acting vulnerable, get more people to buy things they didn’t need by telling them the right tale. Not only did this acting role come easily to him, he was very good at it.

Door to door sales soon became online scams, utilizing the newly launched eBay website to accept payment for items that he had no intention of sending people. Online fraud became face to face conning when he opened a storefront selling non-existent computers to unsuspecting buyers. A professionally drawn up contract ensured victims agreed to pay 25% of the total cost upfront in a non-refundable payment, leaving them no options when the goods never materialize.  Jase Haber was making thousands of dollars and he was still a teenager in high school.

In the early chapters of Prince of Cons, Haber charts his childhood and teenage high school years.  They highlight a confident fearless young man with an air of arrogance who was beating the system and knew it. He was outsmarting his teachers, making more money than they could dream of.  Add this to the rock star status he was enjoying from his peers due to his available income and it is not hard to see why Haber had a somewhat disrespectful attitude to authority. He was using his intelligence to gain the one thing that, for him, provided respect and enabled him to have anything he wanted – money.

Haber’s writing flows well making this an easy and enjoyable book to read with plenty of personal photographs to illustrate his story and add to the building impression of Jase Haber and his life. Chapters are not too long and Haber moves the reader through his life at a comfortable pace.

The style of writing is relaxed and informal with a definite swagger in early chapters. There is a bravado and an assurance when discussing his exploits and scams as a young adult with some crass language when it comes to his relations with women, a tone which moves into a more modest narrative as the book, and his life, progresses.

The more confident Haber became the more the stakes got higher, the profits bigger and the people he was ripping off more dangerous, with Haber taking more risks of reprisals. In between various scams, his desire to be an actor resurfaces sending him in a different direction for a time, trying to break into film with little success. Haber eventually moved into property fraud, a much more profitable scam for much less effort.

This is a story that does hold your interest with a building curiosity as to just what is going to happen next in Haber’s life. While plenty of detail is provided on his activities giving a clear sense of how he was conning people and making his money, no particular scam is focused on in detail with time frames moving quite quickly. It is not repetitive and the insights each part of his story provide build on each other highlighting the progression Haber experienced.

Over time Haber falls in love and has a child.  An experience which came when reflection and re-evaluation had begun to shift his attitude towards more legitimate activities and a pursuit of what he really wanted; an acting career.  His past however, was catching up with him and just when he is beginning to feel settled in his life with the people and things around that fulfil him, he discovers he is going to be held accountable and responsible for his scams and there is no amount of money or persuasion which can get him out of it.

“I don’t think you get this. When the federal government goes after you, you go to prison. Listen, there’s nothing stopping this. You owe them prison time.” – Haber’s Lawyer.

A hard lesson and one which throws him into a parallel world when he is offered a chance to reduce his imminent prison sentence if he agrees to become an informant.

His connections make Haber ideal to go undercover, getting close to pre-selected targets to find the information needed to convict them. An uneasy position for Haber, crossing the line from conman evading the law to supergrass helping the law, but one he takes in order to protect himself and keep him at home in his young son’s life.

These final stages of the book are where the change in Jase Haber can really be seen with the difference in attitude and priorities in his life evident. Here, his writing is insightful and reflective with a distinct change in tone from earlier chapters.

Jase Haber, despite his efforts, does find himself serving a prison sentence and undergoing some eye-opening experiences while behind bars. Knowing his son was growing older without him caused clear heartache to this conman with a fear his son would not remember him. Prison time at this stage in his life was the final nail to confirm he did not want to continue with a life of crime and while money gains you a great deal, there are simply more important things in life. “I knew I would never commit a crime again” he says, “…the hell I had been through was not worth the money I had made“.

Jase Haber has finally been able to enjoy success as a traditional actor achieving roles in various films (including “Recession,” “Thieves,” “Swipe,” and “Blind Hell.”), roles which no doubt he has been able to enhance due to his experiences in his past life. Prince of Cons is a successful book and an insightful look at the life of a conman alongside how and why he changed his life.

It is an honest and reflective piece of work, piecing together the stages in his life and events that have led him to where he stands today. For those curious about how a successful conman focused on money evolves and comes full circle to a life without crime, Prince of Cons will be a satisfying read.

You can purchase Prince of Cons by Jase Haber on Amazon.

Jase Haber was a young boy who discovered early he had a skill for deception and for scamming people; lying to get them to hand over their cash for a product or merchandise which most of the time didn’t exist, came very easily to him. From selling candy to selling computers, this young man began to earn more money than his peers could dream of and this made him popular, gave him power and gave him a confidence and arrogance few could match. Prince of Cons is an autobiography describing the life of a successful conman. Jase Haber explores the scams he pulled off, the money he made and the near misses alongside how the law eventually caught up with him and made him pay for his actions. An insightful read which also highlights the progression in Haber as he has a family and his dream of becoming an actor gets stronger, as does the realization that there is more to life than money. A relatively fast paced book that is easy to read and will appeal to both true crime fans and those curious on how one man built himself into a modern day conman and walked away to live a life without crime.