Home » Book Reviews » I am D.B. Cooper: Startling Confessions Examined in ‘Getting The Truth’

The new book by Forensic Linguist Joe Koenig evaluates the confessions of Walter Reca, claiming to be the man who successfully hijacked a Boeing 727 in 1971 and skydived out of the plane with $200,000 in cash. 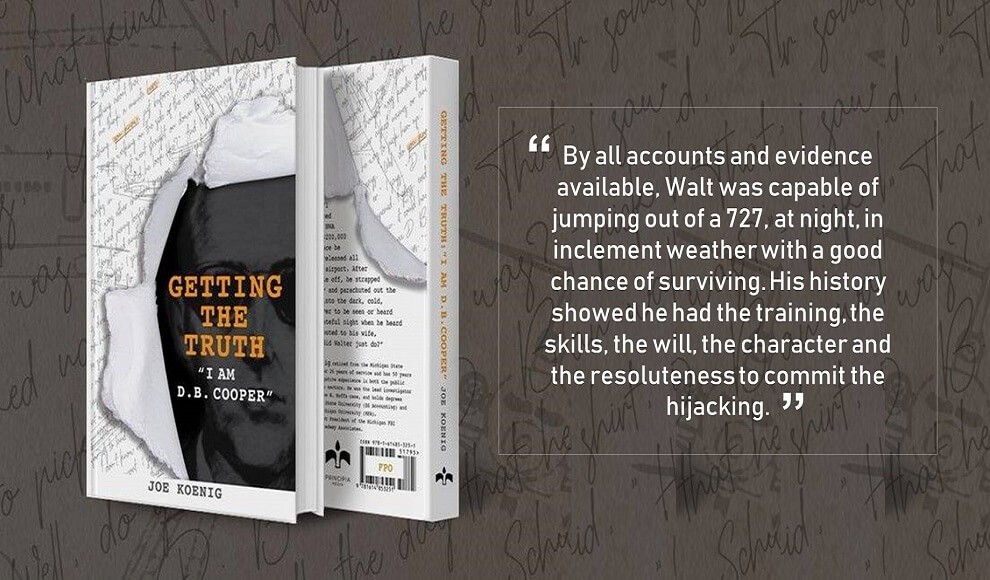 On 27 November 2008, Carl Lauren listened as his friend told him “I am D.B. Cooper.” 37 years almost to the day since the hijacking, 75-year-old Walt Reca had confessed to being the mystery man behind the biggest unsolved air piracy act in American history. “Why now, Walter?” Carl asked. “Because it’s time” Walt replied.

Now for the first time, the confessions of Reca along with witness statements and communications between Lauren and Reca are examined and analysed to determine their accuracy and whether Walt Reca really was the infamous D.B. Cooper.

On 24 November 1971, a Boeing 727 bound for Seattle was hijacked in the air by a passenger whose plane ticket read Dan Cooper. He passed a note to a stewardess claiming he had a bomb on board. After ordering the plane to land in Seattle, Cooper allowed all 36 passengers to leave the plane in exchange for $200,000 and four parachutes. Once airborne again and at 10,000 feet he jumped from the plane with the money never to be seen again. It was a daring and dangerous hijack and a spectacular skydive which left many believing Cooper could not have survived the jump.

“Perhaps Cooper didn’t survive his jump from the plane. After all, the parachute he used couldn’t be steered, his clothing and footwear were unsuitable for a rough landing, and he had jumped into a wooded area at night.” – FBI in their case history article “D.B Cooper Hijacking”.

In July 2016, the FBI announced they were scaling back the investigation into the D.B. Cooper case, one they had been diligently working on for 45 years under the operation name NORJAK. Today, two years on the case of D.B. Cooper remains officially unsolved.

Echoing the Jack the Ripper case, the UK’s most notorious unsolved serial murderer case of Victorian times, the identity of D.B. Cooper is one people have been scrambling for decades to uncover. A number of suspect names have been published and discussed but what is unique about the Walt Reca name, is that this suspect actually confessed to being Cooper and carrying out that hijacking almost 50 years ago.

Due to be released in January 2019, Getting The Truth: I Am D.B.Cooper for the first time details in full the confessions of Walter Reca, expertly examined and analysed by Forensic Linguist Joe Koenig. “There is no wiggle, no hesitancy, no misdirection.” Koenig says on Walt’s confession. “Walt’s statement powerfully compelled me to take on this project.”

Three fascinating hours of audio-taped conversations between Carl Lauren and Walt Reca that took place in the final months of 2008 have been professionally scrutinised and evaluated. Both Carl and his wife Loretta gave author Joe Koenig permission to analyse all these communications and publish his findings. This is in line with the wishes of Walt Reca himself who left a Lasting Testament before his death in 2014 that his confessions could be publicly released and published but only after he had died.

Past cases and a wealth of research informs us of how taking the words of another as entirely true when speaking of involvement in a crime, no matter how historic or serious, can be a dangerous approach. Not everyone is truthful and false confessions to a criminal act occur for a variety of reasons ranging from a desire for attention and fame-seeking to a genuine belief of committing the act in question. The science of linguistics provides one avenue of analysis in such situations, where both the spoken and written word can be examined and analysed to try and uncover the real meaning behind the communication and crucially, whether such words are actually the truth.

Forensic linguistics is about words, phrases, sentences, emphasis, patterns and changes in those patterns. It is a methodical and detailed process. Skills and experience highlight where focus should be while patience and attention to detail provide the insights that uncover truths.

Joe Koenig is a 26 year veteran of the Michigan State Police. He was the lead investigator in the James R. Hoffa case and is a certified Fraud Examiner and Forensic Linguistic specialist.

Koenig had one question to evaluate “Could Walt Reca have been D.B. Cooper?” On distinguishing truth from deception, Koenig writes “People don’t tell complete lies; they tell partial truths.” His first book, Getting The Truth, explains this concept in detail.

Walt Reca was a former paratrooper and Rescue and Survival Specialist with the Air Force Reserve and an experienced expert in skydiving. He also had a chequered past carrying out an armed robbery of a restaurant in Detroit, Michigan in 1965 and going on the run. Within a year of the Boeing 727 hijack, Walt began using the surname ‘Reca’ in place of his real name ‘Peca’ and ensured he had official documents and a passport supporting his new identity. A simple amendment of one letter providing him with an adequate cover.

Getting The Truth: I Am D.B.Cooper provides double value for the eager reader. Not only is it an excellent and insightful look into the complex case of D.B Cooper and the daring hijacking in 1971, but a detailed examination of forensic linguistics and how it can be applied to a real criminal case. Joe Koenig writes in accessible language using metaphors to explain the concepts of communication and how with the right knowledge and experience, a person’s choice and use of words can reveal patterns which are very telling of their real meaning. I found this enjoyable and fascinating to read, however the level of detail required by linguistics and demonstrated here, stripping down sentences and word choice for analysis, does require ongoing attention from the reader.

Koenig explains the process of communication, its complexities and how cues, not always in the control of the speaker, can be combined and understood by the listener and observer. Using this foundation, Joe Koenig discusses and explains the techniques he used to analyse Walt’s statements and communications to Carl with regards to the D.B. Cooper case.

Koenig compared all the information gathered and obtained by Carl with the information released on the case by the FBI. The entire transcript of Walt’s statements and conversations with Carl are included in this book alongside Koenig’s analysis. A rare approach and generous decision which allows the reader to fully appreciate both the power of Walt’s statements and the detailed linguistic analysis carried out by Joe Koenig.

“I concluded that there is no question Walt Reca was a capable candidate. He was wild, impulsive, daring and desperate. Yes, Walt Reca could have been DB Cooper.” – Forensic Linguistic expert Joe Koenig

Getting The Truth: I Am D.B.Cooper is an enlightening insight into the complexities of verbal and written communications and the numerous factors involved which most of us are entirely unaware of. It is detailed and in some ways technical with an intricate analysis laid bare through the case of D.B. Cooper and the confessions of Walt Reca. It is difficult to refute the extensive evidence presented in this book and as a result the identity of D.B. Cooper, I believe, has finally been revealed.

‘Getting The Truth: I Am D.B.Cooper’ by Joe Koenig is due to be published in January 2019 by Principia Media Publishing. Find more details at The Real D.B. Cooper website.

Few historic crimes have generated as much attention, intrigue and investigation as the case of D.B. Cooper. A successful and fearless hijack of a Boeing 727 in 1971 above Seattle resulting in an audacious skydive from the plane carrying $200,000 in cash. The identity this man has never been uncovered although many names have been discussed. In Getting The Truth: I Am D.B. Cooper, the new release from former investigator and now expert Fraud Examiner and Forensic Linguist Joe Koenig examines in fascinating detail the confessions and communications of Walter Reca. A former paratrooper and experienced skydiver, Walt confessed to his friend Carl Lauren in 2008. Only now after Walt’s death can the details be fully revealed. This book provides a compelling analysis of the communications between Walt and Carl and engrossing detail on the intricacies of forensic linguistics. Well written in engaging language I Am D.B. Cooper also includes a full transcript of Walt’s confessions. A captivating read that will appeal to those seeking answers to the D.B. Cooper case and those interested in the science of linguistics and how this can be applied to a real true crime case.

Elton John's "Ticking" As The Soundtrack for a School Shooting