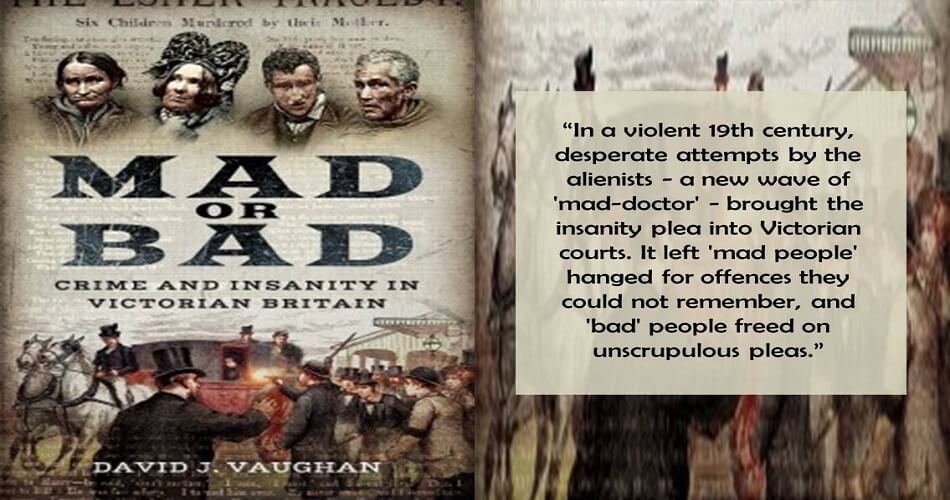 Share on FacebookShare on TwitterShare
“In a violent 19th century, desperate attempts by the alienists – a new wave of ‘mad-doctor’ – brought the insanity plea into Victorian courts. Defining psychological conditions in an attempt at acquittal, they faced ridicule, obstruction – even professional ruin – as they strived for acceptance and struggled for change. By the end, there remains one final dilemma: did mad people suffer, or the guilty escape?”

The idea of insanity invoking criminal behavior in the Victorian era was an unknown territory that few were willing to walk upon. Until then those who committed criminal acts were simply bad people with sinister intentions and no care for the impacts or consequences of their actions.  Psychology and madness were new entities and not ones that were well received when they did start to creep into criminal justice in 19th century Britain. Today we have knowledge and understanding that the human brain is a complex organ. An organ that controls thinking, reasoning and action and for some thoughts can become distorted, realities blurred with fantasies and such processes are not always controllable.

In the early 1900’s however, such science had only just begun and it’s theories and conclusions were looked upon with skepticism and suspicion.  Whereas today a great deal of faith and respect is given to doctors of the criminal mind, over 100 years ago their knowledge and expertise were questioned, belittled and when presented in a courtroom often dismissed as simple ridiculous untruth’s engineered to provide an evil soul a method to escape justice.  Mind doctors were classed as entirely inferior to the trusted and respected testimonies of traditional medical doctors.

The forensic psychologists of Victorian Britain, the ‘alienists’ who assessed a defendant and determined their state of mind for the courts, were a small group who faced great resistance. Judges in particular, the most respected rank within the criminal justice system, told juries to pay no attention to their views.

The skeptical cannot be entirely blamed for their distrust of diseased mind defense theories. The science was in its infancy and the explanations of the mind and its defects were confusing, complicated and difficult for many to fathom. There was a huge divide between the lawmakers and the alienist medics with regards to crime and insanity and how a potentially insane defendant should be regarded in terms of criminal responsibility for their actions.

His definition for determining guilt was simplified; was the accused insane at the time? If yes, has it been proved the crime was unrelated to this insanity? He shifted the burden of proof from the defendant to the crown prosecution.  The law, he said, should prove insanity, not the defendant. Issac Ray, an influential American medic offered some clarity in amongst the confusion and varied opinions.

When it came to women and insanity in the Victorian era, excuses were given for their criminal behavior by themselves and others. Committing a crime during their time of the month which “made them liable to madness,” was a popular view at that time.  Killing their children, arson, the murder of other adults, all could be carried out “owing to sympathy of the brain with the uterus,” said forensics professor Alfred Swaine Taylor in 1873.

Mad or Bad, Crime and Insanity in Victorian Britain is a well-presented book serving as an excellent reference guide to terms and procedures, prominent figures and case histories surrounding insanity and madness in the criminal system in Victorian Britain.  The book includes a glossary of terms and a ‘who’s who’ section of influential figures with clear factual explanations on the complex debates and considerations of the time.

“In Victorian Britain, another issue arouse: was the defendant in control of their mind? In an era with the sentence of death, resolving this quandary was a matter of life.”

Part Five sees the beginning of 25 case histories from across the United Kingdom.  Isabella Blyth who murdered her mother in November 1851 in Fife, Scotland and spent the rest of her life in a lunatic asylum as a result. Simon Fraser who murdered his son in Glasgow in 1878, claiming his nocturnal nightmares and visions of being attacked by wild animals ended in him viciously jumping on one such animal to wrestle it away from his son, before he awoke and discovered his 18-month-old son dead on the floor from a fractured skull. In the first sleep-walking trial of the country, Fraser was neither found guilty, acquitted or fully insane, instead somewhere in between where he was to spend time in an insane asylum and must for the rest of his life always sleep alone.

Cases are organized alphabetically through the defendant’s surname rather than chronologically on the date the crime occurred.  A decision which does confuse the topic somewhat with cases jumping time-frames preventing a smooth sequential understanding of cases across history.  The cases studies do however provide an insight into the complexity of the insanity plea put forward and the swirling debates around its validity.

On 10 June 1845, an officer of the law who shot his wife with a borrowed pistol in a jealous rage resulting in her death was acquitted of murder due to the crime being carried out in a state of passion and not through pre-meditation. The jury concluded he had shot his wife “in a state of great mental excitement” and their verdict was delivered as not guilty due to state of mind.

In a particularly gruesome murder 14 years earlier, on 2 December 1831 in Edinburgh, Martha Geddes was found dead inside her own home with her head split in two by a spade found at the crime scene. Twenty-four hours later 44-year-old John Howison was arrested. A man known for his kindness to some, in the period before the murder Howison had displayed some disturbing behaviors; he became unkept, regularly revealed his temper and appeared to be suffering from delusions.

Dr. Combe, an alienist concerned for Howison’s state of mind, offered up the insanity plea.  Howison stood trial at the High Court in Edinburgh.  He told the court he was entirely sane but the testimony of his landlady and those who knew him painted the picture of a reclusive man obsessed with his religious beliefs.

“The medic – the alienist – who saw exculpation in madness; and the law, rejecting it all as an easy escape.”

“It was probable he had laboured under some hallucination or mental delusion when he committed the deed,” the medics said at his trial. The jury however saw a violent man who clearly knew right from wrong.

John Howison was convicted of murder and sentenced to hang. Just hours before his death, John Howison announced he had killed a number of men and children before the murder of Martha Geddes. They were claims rejected by all who heard them as a desperate man’s attempts to delay his fate. In debate after his death, it seems many felt Howison had been hanged for a crime he either didn’t commit with just circumstantial evidence against him or if he did, it was out of clear madness.  He was taken to his death “a raving maniac” said Alfred Dymond from the Society of the Abolition of Capital Punishment.

A very complex topic has been deeply researched and thought about by author and historian David Vaughan. The case histories are factual and fascinating with earlier chapters serving well as a quick reference guide to who someone is, what their role was, and a full explanation of a term or a law referred to. There is unusual formatting and organization with the book starting with reference material rather than ending with it, but if not too eager to jump into case studies these chapters lay the foundations for the details to come. Mad or Bad is definitely successful in its objective to keep information factual and to fully educate the reader and provides an excellent reference text many readers will return to again and again.

‘Mad or Bad: Crime and Insanity in Victorian Britain by David J. Vaughan is published by Pen & Sword Books and available on their website.

Introducing the notion that a person could be of diseased mind at the time of committing a heinous crime, was not one well received in the British Victorian era. Emerging forensic psychologists were termed the ‘alienists’ facing fierce resistance in their attempts to explain criminal acts stemming from madness rather than simply badness. Historian David Vaughan has written an informative and factual text on the thorny issue of crime and insanity in Victorian times. Collating 25 fascinating case histories where the insanity plea was presented alongside reference chapters of terms, significant figures and the debates of this period in history. Readers will need to persevere through the reference material to reach the case studies in Part Five, but if interested and curious in Victorian crime and the introduction of insanity as a defence, readers will be rewarded with a wealth of material collated in one easy to read enjoyable book.

Blaming Violent Video Games For Violence: It's Time To End The Debate

A Tale of Two Theories: Murder or Suicide?