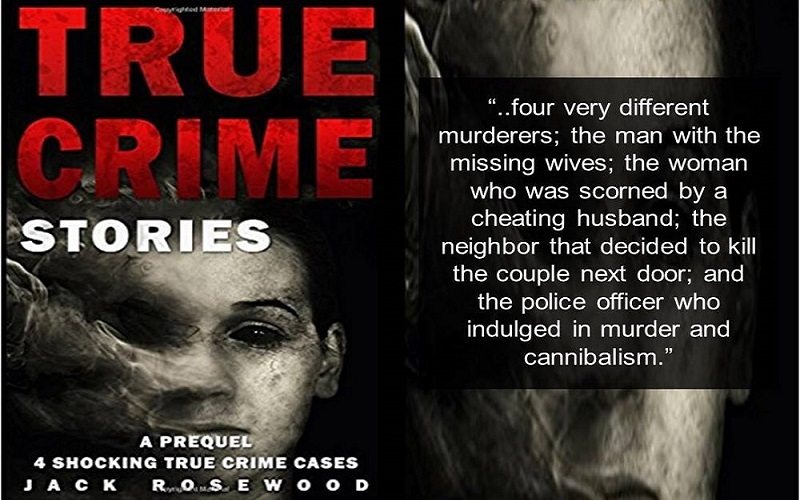 Share on FacebookShare on TwitterShare
When it comes to murder there are no end of different circumstances that can drive someone to kill. Jealousy and rage, power and control, secret desires and dark twisted fantasies, all can come into play and in the four true crime cases explored in True Crime Stories: A Prequel by Jack Rosewood, we see them in vivid detail.

These cases are entirely different from each other highlighting the range of shocking acts us humans can do to each other and the motivations behind them. Providing a taster of the writing and true crime you can expect from Jack Rosewood’s full True Crime Stories anthology series, these are fascinating tales of murder leaving you in no doubt that you want to read more.

This prequel is currently available FREE, simply visit Jack Rosewood’s Instafreebie page and you can download the book for your Kindle or eReader.

I am not going to reveal all the details of these shocking cases and ruin the book for you, but each case in this prequel is indeed more shocking than the last as promised and by Chapter 4, it is impossible to put down.

“We are all a little intrigued by the act of murder… For some it is the details of the crime itself, but for others it is the meaning behind the killing.  What makes a person cross that line between thinking about murder and actually committing it?” – Jack Rosewood

Explored first is Felix Vail, the man whose wives and partners repeatedly either died or mysteriously disappeared leaving Vail the grieving widow, but was he? In one of the oldest cases in America, Felix Vail is a man who tragedy seemed to follow around.  Deaths which did not get recognized as what they truly were until his second wife vanished without a trace.

When authorities take a closer look after a journalist picks up on the death of Vail’s first wife fifty years ago, a trail of deceit and suspected murder is revealed. Rosewood charts the strange deaths and disappearances that surround Vail for most of his life, leading you through his history, his relationships and though his murder trial in Louisiana in 2016, the oldest conviction of a suspected serial killer in U.S. history.

Following on is the case of Betty Broderick in San Diego in 1989, a scorned wife whose anger and frustration boils over into a murderous rage.  This is a woman who crept into her ex-husband’s house and shot him and his new wife dead in their bed in the early hours.  Rosewood successfully draws you into this case giving a real insight into how she was disrespected by her cheating husband who was having an affair behind her back for years. While no excuse for cold blooded murder, they are circumstances many woman can identify with and provides a history and a build-up to just what drove this middle age mother to kill so brutally.

“Daniel and Linda were sound asleep in their bed when Betty entered their room.  Betty opened fire on the couple, killing Linda instantly with one bullet to the head and one to the chest.” – Jack Rosewood

Chapter 3 tells of 31-year-old Scott Tomaszewski, a young man who committed a most heinous crime seemingly for no other reason than he could and he wanted to see what it was like to kill.

The elderly couple he terrified and murdered on the night of 10 May 2015 in Montgomery County, Maryland were his neighbours who had done him no harm, yet they died horrific deaths in their own home.

As brutal as his crime was his behaviour in the aftermath is equally shocking. Tomaszewski feigned shock and fear at what had happened, even posting updates on his social media telling of his horror at the crime and his disdain at the police for not finding the person responsible.  Manipulative and arrogant in his attitude, he was intent on getting away with murder.

Jack Rosewood follows the same format for this case as the previous two, walking you through the crime and the aftermath giving a full picture of what happened and how this individual was brought to justice. An exploration of Tomaszewski’s possible motives is included, looking at the possibilities of brain injury and mental illness or whether this individual was simply just evil.

The most shocking of these stories is reserved for Chapter 4 looking at the case of 58-year-old Detlev Guenzel, a forensic specialist for German police who had some incredibly twisted fantasies, ones which he became determined to take out of his imagination and into real-life.

Consensual cannibalism is a little explored, intriguing but horrifying act which raises some interesting questions for criminal justice.  If, as it was in this case, an individual gives their full consent to be killed and eaten by another, is such an act then in fact murder or indeed a crime at all?

“But this respectable citizen had been secretly exploring the possibility of engaging in consensual cannibalism for quite a while.  Tucked away in his B&B, Guenzel spent hours upon hours….searching for someone who would help him live out his morbid fantasy.” – Jack Rosewood

A fascinating chapter which also explores further known cases of mutally agreed murder, suicide and cannibalism, all as jaw dropping as each other but addictive reading.  Rosewood has a talent for discussing such cases in detail driving home the true horror behind them but with a flowing narrative that is easy to read. Few cases have shocked me as much as this one, and ‘vorarephilia’ the official term for the desire to eat or be eaten by another which leads to consensual murder and cannibalism is something I struggle to get my head around.

True Crime Stories: A Prequel is a great read.  It’s a short book and the perfect prequel to introduce the work of this author. To date Jack Rosewood has published six books in his True Crime Stories series and if you like gritty well-written true crime, pick up a book from Jack Rosewood and you will not be disappointed.

Four gripping and recent true crime cases make up this prequel to Jack Rosewood’s True Crime Stories series. A quick but fascinating read giving a taster of the level of true crime on offer in Rosewood’s books. Each chapter is more shocking than the last with cases including the jealous and enraged woman who murders her ex-husband and his new wife in cold blood, the ordinary man who decides to slaughter his elderly neighbours simply because he could and the German police forensic officer who kept his dark fantasies about eating human flesh secret until he met the perfect partner who wanted to be killed and eaten. Written in a free-flowing style this is a book you cannot help but keep reading and most definitely highlights Jack Rosewood as a true crime author to look out for.