Each as enthralling as the next, these true crime stories are hidden tales that have lain unreported in the depths of history until now. 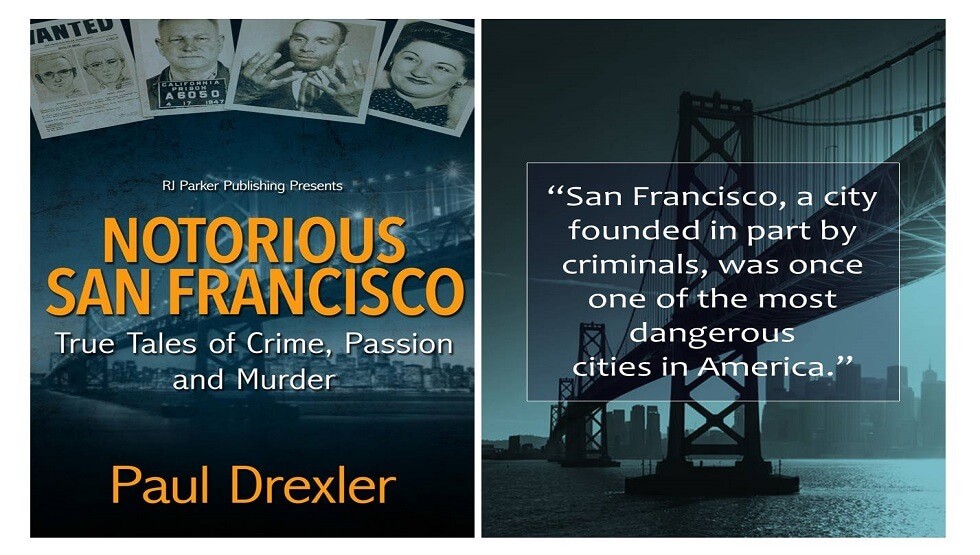 Written by true crime history expert and Director of Crooks Tour of San Francisco Paul Drexler, each story is a fascinating insight into a criminal world with tales dating back to 1870 and running up to the early 1970s. These are true crime stories that most will never have heard of. Easy to read in a free-flowing rrative, Drexler’s years of research and writing on San Francisco’s crime history shines through. His skill is telling these historic stories in a way that brings them to life with each and every one being as juicy, lively, and engaging as the next with twists and turns fit for any modern-day documentary.

Take Dr. Albert Abrams the so-called ‘Father of Electrical Medicine’. A medical degree at 19-years-old and a Pathology professorship soon after, Abrams was a respected medical man. In the early 1900s, the invention of electricity swept the world with its potential and opportunity and this was not lost on the bright Albert Abrams.

In 1908 he invented Spondylotherapy, claiming that manipulating the spinal column with electricity could diagnose medical issues. He developed various techniques and machines, most using electricity in some form for diagnosis, testing, and cure of diseases and afflictions. Renting out his inventions to practitioners and raking in percentage cuts from profits he became quite a rich man. However, his inventions and claims had shaky foundations and his desire for money outweighed his commitment to medicine. The medical community eventually became very suspicious and rather concerned over his claims and began taking a closer look at his inventions.

When people think of San Francisco and crime, the Zodiac Killer springs to mind, and no true crime history book focused on the city would be complete without coverage of this infamous case. The Zodiac serial murders are one of the most notorious crimes in the world that remains unsolved. A serial killer with no identity except this self-assigned moniker

In 1969 a killer began sending letters and cryptograms to the San Francisco Chronicle signing them ‘The Zodiac’. In Notorious San Francisco, Drexler takes a look at the case, the suspects, and some of the various theories surrounding the murders. This includes with a focus on deciphering the cryptograms the Zodiac sent into newspapers and Radian Theory.

The ‘Dark Strangler’ of San Francisco is also explored, a serial killer later dubbed the ‘Gorilla Killer’ by the press due to his unusually large hands. In 1926 elderly women began to be murdered, in eerily similar ways. In total, 22 women were killed by this man often in quick succession and across numerous cities. When the prime suspect was finally located, the discovery of a rotting corpse under his bed confirmed he was the man police had been hunting. He escaped from custody however by picking the locks of his handcuffs with a nail file while in his cell. Once recaptured his true identity was revealed amongst all the aliases he had been using. He was Earle Nelson from San Francisco.

Within each chapter including Dangerous Women, Serial Killers, Con Artists, and Unsolved Mysteries, each story is concise yet brimming with detail which keeps you hooked. Both criminal men and women are included in this fascinating book highlighting that when it comes to crime, passion, and murder, females can indeed be just as deadly as males.

Take the young Dorothy Ellingson, who at just 16-years-old in 1925, shot her mother dead at their home before heading on out to her favorite jazz hall. In 1925 a daughter killing her own mother was unheard of, a most unusual crime and it was one that made headlines as a result. Her act also prompted interesting debate and discussion among psychologists of the time. She should have been picked up and “placed in a like-minded school for degenerates at first hint of her delinquency” wrote one.

The dance halls and jazz venues she regularly attended were raided and sweeping arrests were made on the basis that their influence had somehow pushed this young girl into the depths of murdering her own mother. After ongoing debates on the sanity of this teenager not aided by the outlandish attention-seeking behaviors of Dorothy herself, she was eventually brought to trial and faced punishment for her ghastly deed.

Among the many true crime books now available, especially those which feature a collection of true crime stories, Notorious San Francisco stands out. The quality of Drexler’s writing telling these sinister tales of the past provides a unique and exciting book any true crime fan will enjoy reading from cover to cover.

‘Notorious San Francisco’ by Paul Drexler is published by RJ Parker Publishing and available in paperback, kindle and audiobook formats at Amazon