Home » Book Reviews » A Murder Over A Girl: The Shooting of Teenager Larry King

The shocking murder of 15-year-old Larry King, a teenager struggling with his gender identity, by his fellow classmate 14-year-old Brandon McInerney in 2008 in California raised some challenging questions. 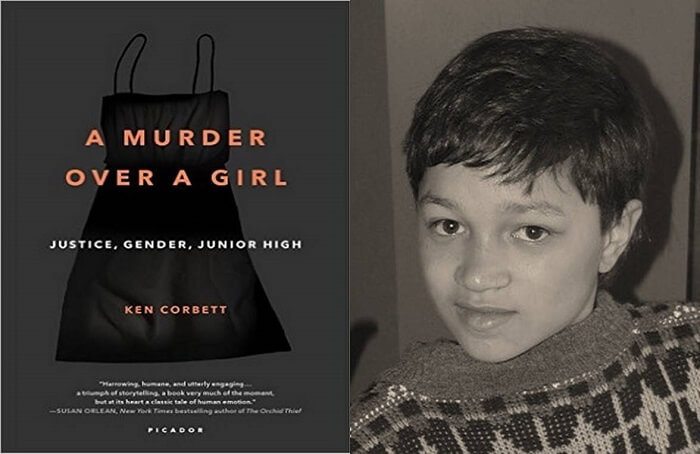 Share on FacebookShare on TwitterShare
“A psychologist’s gripping, troubling, and moving exploration of the brutal murder of a possibly transgender middle school student by an eighth grade classmate.”

On 12 February 2008 at Green Junior High in Oxnard, California, 14-year-old Brandon McInerney shot and killed 15-year-old Larry King inside their computer class. A violent act carried out in front of 26 horrified classmates and their teacher. In a case which sent shock waves through a small community, the issues of juvenile violence, gender identity, prejudice, and race have become intertwined. The brutal murder of Larry King, a gender variant brown teen by his white teenage classmate resulted in people trying to understand whether society’s response and attitudes towards this crime were appropriate or acceptable.

Ken Corbett is a clinical psychologist and Assistant Professor at the New York University Postdoctoral Program in Psychoanalysis and Psychotherapy. He has spent years of his career researching boyhood and crime and specifically the variables found among young males and their behavior “no two boys are the same, no one boy is invariable” he notes.

Also the author of Boyhoods: Rethinking Masculinities, he was shocked by this case and intrigued as to how it was being treated in the media. Ken Corbett attended the trial of Brandon McInerney every day to follow and research the case for his latest book “A Murder Over A Girl: Justice, Gender, Junior High”.

The Murder of Larry King

Larry King was a teenager struggling to find who he was. Specifically, he was struggling with his gender identity and in the weeks leading to his murder, he had begun identifying himself as female, asking to be called ‘Leticia’. Adopted as a toddler, reports of child abuse within his adopted home circled his childhood until he was removed from the home for vandalism and theft.

He was placed into a local run shelter for abused and neglected children where he had been living for the 3 months before he was killed. Here it seems, he found a much more supportive and encouraging atmosphere about his gender identity compared to what he experienced at his school or from his classmates. On the day of the murder, halfway through a routine computer science class, Brandon McInerney stood up behind Larry King and fired a small caliber handgun twice, striking Larry in the head before the gun jammed. Brandon had taken the gun from his home, a home which when searched by police officers was found to contain a total of 15 guns, alongside what was recognized to be Nazi and white supremacy related material.

The trial of Brandon McInerney started on 5 July 2011 with a total of 98 witnesses called the stand.

“Telling the story of a murder is not simply a recitation of facts or a pragmatic account of the living and the dead. The trauma of murder speaks beyond what we can see and understand.”

The prosecution claimed Brandon hated Larry and had planned to kill him due to Larry’s “perceived gender or sexual orientation”. The testimony of both boys’ school friends and teachers was heard. The comments made by Brandon about harming Larry, the teasing suggestions Larry made towards Brandon, the altercations and tension between the two boys were highlighted and exposed.

The issue of race was not a prominent one during the trial.  A white boy killing a brown boy did not feature as a motivating factor. Larry King could not tell his side of the story and Brandon McInerney did not testify, as is perfectly within his right. In trying to comprehend such an act from a young adolescent, the psychology, social attitudes, and unsettlement society have with issues of gender are explored by Ken Corbett. Detailed accounts of the trial and the proceedings which played out before him are illustrated. Society is still greatly uncomfortable with the idea that an individual could feel that they should be the other gender.

The idea of a man or a woman changing their gender, identifying as the opposite gender or being attracted to the same gender, is not fully accepted and as such prejudice bubbles away. When it is a young adolescent who is displaying such gender transitions, this reaction appears to be even stronger.

Watch the documentary-film “Valentine Road” discussing some of the key issues of this case with those who were involved.

A Murder Over A Girl is a rare insight into the proceedings of a complex and emotional trial.   The author has captured not only the procedural workings of this case but the behaviors and the emotions of the witnesses and of the families involved.

These are aspects which his experience as a Clinical Psychologist has enabled him to observe and to reflect on, aspects which I think greatly enrich this book.

Related: Kitty Genovese: A Public Murder and its Private Consequences

It is impossible to read this narrative without feeling and without your own emotions finding their way to the surface.  In a case where through defense lawyers, the victim of this brutal crime, Larry King, was portrayed to be at fault, it is hard not to question how this can be in our modern society.

An adolescent teen from a broken home with violence, disruption, and identification with white supremacy ideals takes the life of a fellow adolescent, not by accident, not through self-defense but through anger.  A criminal act which he openly confessed to, which there was no doubt he had carried out yet a defense was mounted which told the tale of a stable and well-balanced boy who had been pushed over the edge by the ‘unacceptable’ behavior of his victim. The behavior of a teenage boy displaying gender variance.

“Living gender, especially as it blooms in adolescence, brings forth a host of emotions and counter-emotions or defenses.”

In this case, the actions of Brandon McInerney were defended based on the notion that Larry’s behavior and gender choices brought himself trouble. This case proceeded as if Larry King was on trial not that he was the victim of a brutal murder. Brandon was portrayed as a normal child who could not deal with the ‘harassment’ as he may have seen it from another classmate who he perceived to be gay.  His actions, according to the defense, were a direct reaction to Larry’s behavior.

The abusive background of Brandon and its influences were brushed aside. The community and local society did not appear to recognize the dangers of an abused child growing up and how violence and aggression can manifest in them. Ken Corbett is a psychologist and his book has therefore been written from that perspective, setting it aside from the usual true crime books written by journalists or interested parties.

This is not a crusade against Brandon for his actions and how society and his community excused it. This is writing which has tried to be a balanced look at these two boys, their differences, and their outcomes. It is a hard-hitting and emotional journey through the destruction of both the lives of Larry King and the boy who took his life, Brandon McInerney.

It is not a narrative that simply recounts the facts of this highly publicized case; it is a narrative which considers and assesses the wider issues at play.  The notion of gender identification particularly in adolescents’ and societies attitude towards such issues. The challenges of violence and aggression in teen boys, their upbringing, their internal psychology and its influence on their behavior.  Overall this book presents this case as it really is, in devastating clarity including the areas we as a society should be thinking about and desperately need to address.

You can purchase a copy of A Murder Over A Girl by Ken Corbett at Amazon.

The shocking murder of 15-year-old Larry King, a teenager struggling with his gender identity, by his fellow classmate 14-year-old Brandon McInerney in 2008 in California raised some challenging questions. Larry King was shot dead in front of his class and teacher in a shooting said to be motivated by his perceived gender orientation. Ken Corbett, a clinical psychologist, followed this trial in order to write A Murder Over A Girl which explores how the case was treated in the courtroom, the issues of gender variation and teenage violence and how in this case the blame for this horrific crime was laid at the door of the victim. An insightful, engaging and emotional book providing not only the grim details of this murder and court case but a wider look at how at adolescence and violence, gender identity and societal attitudes. This is a thought-provoking read that leaves its mark.