Founding member of the Essex Boys firm, Bernard O'Mahoney reveals the true story behind the brutal triple murder of his former gang partners in Essex in 1995 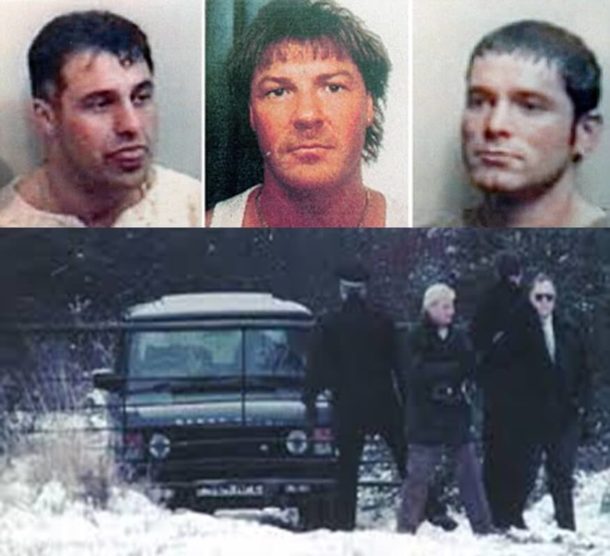 Share on FacebookShare on TwitterShare
On 6 December 1995, three leading members of the Essex Boys gang, Tony Tucker, (38), Pat Tate, (37) and Craig Rolfe, (26) were found dead from gunshot wounds inside a range rover on a lane next to the A130 at Rettendon, Essex.  It was a brutal triple gangland murder that sent shockwaves through the local underground community. In Essex Boys: The Truth, the real story of what happened and the ensuing fallout is finally revealed.

In December 2015 on the 20th anniversary of the Rettendon murders, Bernard O’Mahoney, a founding member of the Essex Boys firm and author of a tell-all book, reveals the truth of what happened on that December night. He left the firm just two weeks before his former partners were found murdered inside their range rover. In 1990’s Essex, the underground drugs trade was ruled by ruthless individuals who would stop at nothing to gain wealth from their illegal operations.

“Bernard O’Mahoney knows the real story of what happened that night and the ensuing fallout and wants to put to rest the ghosts of those violent years, to see justice served for all and finally, to open the way for the truth to come out.”

Tony Tucker ran a lucrative security business throughout Essex, employing bouncers for nightclubs and thereby providing a vehicle to channel his drug supply. He worked with Michael Steele, a drugs smuggler bringing drugs in from abroad and distributing them through local clubs under the menace of Tucker and his associates.

Bouncers would control who could enter the clubs and sell the drugs, taking a portion of their profits in the process to feedback to Tucker. Bernard O’Mahoney, who today is a crime writer, has a chilling past littered with violence and intimidation. Working the doors of Essex nightclubs he soon began working with Tony Tucker and over time he became acquainted with the other players, Patrick Tate and Craig Rolfe.

The death of 18-year-old Leah Betts in November 1995 brought a media storm to the town of Basildon in Essex with the activities of these men soon coming under the spotlight.  Leah Betts died after taking an ecstasy tablet purchased at Raquel’s nightclub where Bernard O’Mahoney ran the door. The media attention and realization that a young girl had lost her life began to cause rifts between the men.

Internal arguments rose between former friends and they began to turn on each other. In the world of gangs and drugs, this meant death threats and continued ruthless violence.  Just weeks after the tragic death of Leah Betts, the Essex Boys as they had become known, were found dead.

In early 1996 Darren Nicholls, a local small-time criminal, was arrested and charged with conspiracy to import cannabis. In trying to avoid a lengthy prison sentence, he began to tell police his version of what happened on that night six months previously.

According to Nicholls, he was the getaway driver for Michael Steele and Jack Whomes who he claims committed the murders.  Turning ‘supergrass’ on his former partners granted Nicholls a reduced sentence of 15 months which he had already served on remand.

While investigations and speculation on the evidence of Darren Nicholls continued, known players in Essex began to feud over the dead men’s turf.

Malcolm Walsh led the pack alongside his partners Damon Alvin, Ricky Percival, and Steve ‘Nipper’ Ellis.  As their empire grew, further eruptions of violence saw Malcolm Walsh killed in 1998 in a ruthless attack in front of his own children, pushing Damon Alvin into retaliation.

More violence followed with an armed assault on the Tretton family believed to have been responsible for the death of Malcolm Walsh. A known associate of Damon Alvin and police informer Dean Boshell was killed soon after.

In January 1998, Michael Steele and Jack Whomes were convicted of the December 1995 Rettendon murders with the evidence of their once associate Darren Nicholls being the basis of their conviction.  Despite a number of appeals, Steele and Whomes remain in prison with another five years to serve before they can be considered for release.

Darren Nicholls was given a new identity under the Witness Protection Programme and is currently living at an unknown location in the UK having no charges brought against him.

Charged with triple attempted murder for the attack on the Tretton family, Damon Alvin turned on his associate, Ricky Percival, accusing him of murdering Dean Boshell and being involved in the Tretton shooting.  The principal witness in the prosecution case, his evidence saw Ricky Percival convicted and sentenced to four counts of 28 years in prison in December 2006.

Damon Alvin was a man with a violent past, a dishonest nature and heavy involvement in underground activities; this was an informant that many people were surprised police took seriously. In the first case in UK history, Damon Alvin was the defendant and a prosecution witness in the same murder trial.  While Ricky Percival was given a life sentence, Damon Alvin, through giving evidence against him, evaded justice.