in True Crime & Justice
Reading Time: 11 mins read
A A 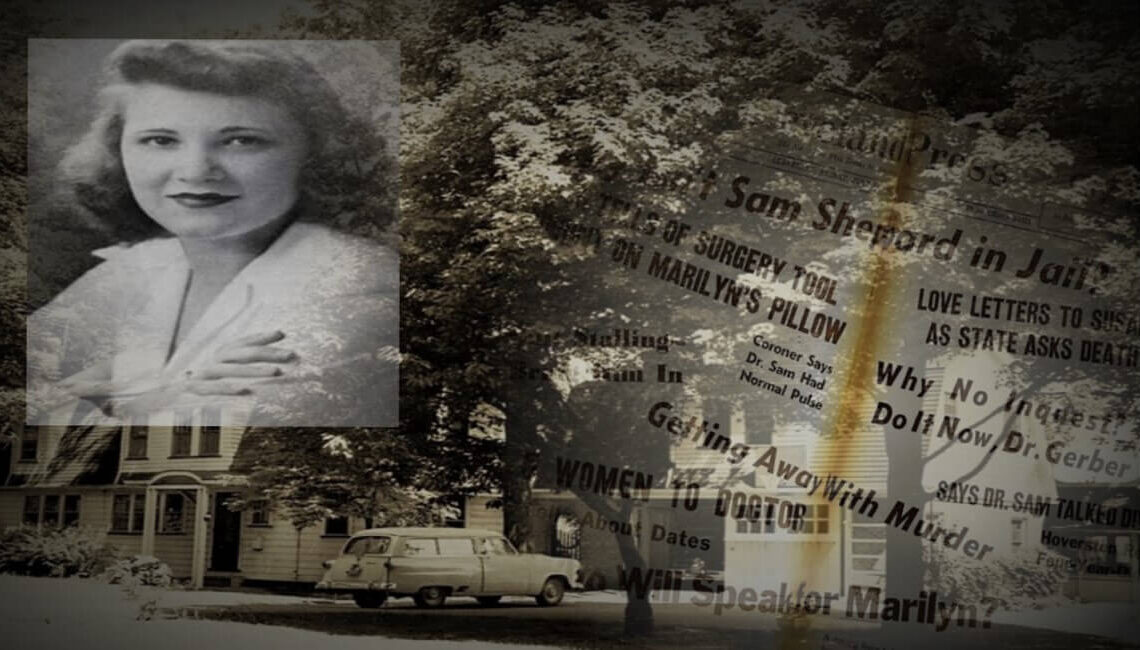 A Dream of Death

She jolted awake from the horrific nightmare, as if gasping for air when you finally break the water’s surface.

Except that it wasn’t a dream.  She was locked in a death struggle in her darkened bedroom, barely able to grasp the reality of her own murder, before the wicked arc of the killer’s weapon blotted out all that she would ever become.

But the 1954 Cleveland slaying of Marilyn Sheppard would become a national sensation, a fascinating whodunit poured into a sensational cocktail of adulterous sex and graphic violence.  The story grew from a dirty joke whispered under the elms and eaves of suburbia into a nasty media campaign that compelled the arrest of Dr. Sam Sheppard for his pregnant wife’s murder.

Was this a good man unjustly accused?  Or a rich doctor getting away murder?

Ohio’s most infamous murder mystery will turn 68 this summer, having lost none of its cold case sheen.

On the Sunday morning of July 4th 1954, at 5:45 AM a distraught Sam Sheppard phoned his neighbor and blurted “My God, Spence, get over here quick.  I think they’ve killed Marilyn!”  With this stunning pronouncement, the curtain rose on an unfathomable tragedy in sleepy Bay Village, Ohio.

Local police responded to an address on Lake Road, a spacious house perched nearly one hundred feet above the winding shore of Lake Erie. The locale was suburban, stylish and extravagantly middle-class.

Inside they encountered a drenched and shirtless Dr. Sam Sheppard pacing and moaning in his study. There were signs of ransacking, and Sheppard appeared to be dazed or injured.

Upstairs they found Marilyn Sheppard battered to death in her bed, her face a bloody pulp of lacerations, her pajamas in disarray.  To officers who did little more than issue traffic tickets, the ghastly tableau in the murder room was beyond surreal.

As more cops and reporters began to arrive, Sam Sheppard told a confusing, disjointed story.  While napping downstairs in the early morning hours, he was awakened by Marilyn screaming his name.  Lurching up the darkened staircase, Sam saw a “figure in white” bending over his wife’s body on the bed.  He was then “clobbered” from behind and knocked out.

He came to in a dizzying fog, but managed to check Marilyn for a pulse and found none.  Hearing a noise downstairs, he saw a shadowy figure run out the back of his house and toward the lake.  Sam chased him onto their private beach, where he struggled with the “figure”, who he described as a tall man with “bushy hair,” until being knocked out again.

He awoke the second time lying on the beach, his legs in the water.  He faltered back to his house, checked on his still sleeping son Chip, and called his friend Spencer Houk, a neighbor who was also the mayor of Bay Village.

Sam’s story was at best improbable, and the Cleveland detectives who’d quickly taken over the case were incredulous.  Did his bizarre tale prove that he murdered his wife?

Before investigators gained any traction, Sam Sheppard’s doctor brothers whisked him off to their family hospital to treat his apparent injuries.  As they drove away, frustrated cops and reporters concluded that the family was circling the wagons.

Already in the first hours after Marilyn was found brutalized in her bed, this crime was destined to spin an infinite montage of fact, speculation, and rumors.  And here in Bay Village, at the intersection of wealth and waterfronts, everyone involved was wondering.

Were there other dark gardens lurking behind the white picket fences?

Shortly after Sheppard was taken from the crime scene, the “other Dr. Sam” arrived at the Lake Road house.

Samuel Gerber was the longtime Cleveland coroner, a diminutive, arrogant man who took pride in collecting enemies – his hostility toward the Sheppard family and their Osteopathic Clinic was well known.  In June, Gerber had even told an intern that he was “going to get them someday.”

Gerber would later determine that Marilyn had died from 35 blows to the head from an unidentified weapon.  She had struggled bravely against her killer – two of her teeth were knocked out, and her pajamas had been pulled up to reveal her breasts and genitals.

The downstairs was ransacked – the killer had turned over Sam’s medical bag and even smashed two of his athletic trophies.  A small canvass bag containing Sam’s watch and other valuables was later found discarded by the stairway where Sam claimed to have chased the killer.

Despite signs of burglary and rape, in Gerber’s view the crime scene was faked to conceal a domestic homicide.  Without any testing, the coroner had already assumed the blood trail leading from the murder room was Marilyn’s blood dripping from the killer’s weapon.

The Sheppard crime scene was compromised almost immediately – police,  the press and neighbors wandered through the house with impunity, and the initial investigation was predictably rife with errors.

Some questions were never answered.  Others were never asked.  How had the bag with Sam’s valuables arrived in the shrubs by the stairway to the beach?  Why would an intruder leave it there?  Why would Sam engage in this clumsy staging?  Why wasn’t he covered in blood?

Gerber never considered these contradictions when he dispatched two Cleveland homicide detectives to interview Dr. Sam at the family clinic. As he lay there still in shock from the morning’s harrowing events, one of the detectives confronted Sheppard with a nightmare scenario.

I don’t know what my partner thinks, but I think you murdered your wife!

It all went south for Sam Sheppard after that dramatic accusation.

Within days, Dr. Gerber held a raucous inquest in a high school gymnasium that was open to the public.  Rumors were swirling about Sheppard’s possible infidelity as Sam took the stand wearing sunglasses and an orthopedic neck collar.  It was not a good look for the prime suspect.

Sheppard foolishly denied that he’d been unfaithful to his wife, but confirmation of his perjury came quickly when attractive lab technician Susan Hayes admitted to a lengthy affair with the handsome doctor.  Coroner Gerber then exceeded his authority while delivering his verdict, calling Marilyn Sheppard’s death a homicide committed “by her husband.”

Yet the exposure of Sam’s affair with Susan Hayes gave police the motive they’d been seeking, and the local press grabbed the adultery angle and ran with it.  Louis Seltzer, editor of the Cleveland Press and a major player in Ohio politics, teamed up with Gerber to orchestrate a vicious vendetta against Sheppard.

A pregnant woman had just been butchered amidst rumors of adultery in conservative 1950s Ohio.  Handed the story of the decade, Seltzer sold thousands of “Extras” filled with lurid speculations while goading Cleveland investigators to arrest the doctor.  Blaring headlines like Someone is Getting Away With Murder and Quit Stalling, Bring Him In! eventually caused police to cave and arrest Sam Sheppard for murder.

Even before his trial began that November, presiding judge Edward Blythin confided to journalist Dorothy Killgallen that Sheppard was “as guilty as hell.  There’s no question about it.”  Once in court, Blythin allowed the local press to trample any semblance of legal decorum.

Taking the stand in his own defense, Sam Sheppard was a disastrous witness.  Arrogant and detached, he came across as a mediocre doctor and a philandering husband with a sense of entitlement.  Under cross-examination, Sam would answer “I don’t know” 156 times.  His testimony about the murder night remained consistent, yet still seemed jumbled and contrived.

Could a husband kill his four months-pregnant wife with his seven-year-old son asleep in the next room?  The Sheppard jury believed it, and on December 21st, 1954 convicted Sam of second-degree murder with a life sentence.

Cleveland papers roared their approval at the verdict.  Yet national journalists at the trial were disheartened – to them, Sheppard had merely been guilty of adultery.  So how was Sam Sheppard convicted of murder without any physical evidence against him?

The Cleveland Press, libelously vindictive towards him from the outset, made a fair trial impossible.  If ever a murder case cried out for a change of venue, it was this one.

The prosecution also forced the jury to take a leap of faith as they hammered Sam’s lack of honesty about his affairs.  IF Sheppard could lie about marital infidelity, then why wouldn’t he lie about killing his wife?  This tactic played right into the conservative jury’s temperament.

Coroner Sam Gerber drove the final spike into the Sheppard defense.  As an expert witness, his testimony identifying the missing murder weapon as a “surgical instrument” was devastating to the defendant.  Gerber never produced said instrument for the jury to inspect, but the coroner’s reputation was all this jury needed.

After a few appeals were denied, the steel bars of prison slammed shut on Dr. Sam in early 1955.

But the Sheppard saga was just getting started…

Read the conclusion of this story Part Two.

JT Townsend is a freelance writer, self-described armchair detective, true crime author and lifelong resident of Cincinnati. This article was originally published on his website jttownsend.com available here. To read more from JT, check out his Facebook Page at facebook.com/TrueCrimeDetective and his books available on Amazon. 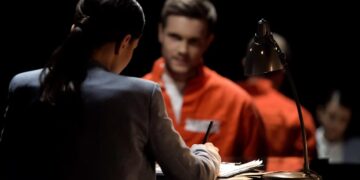